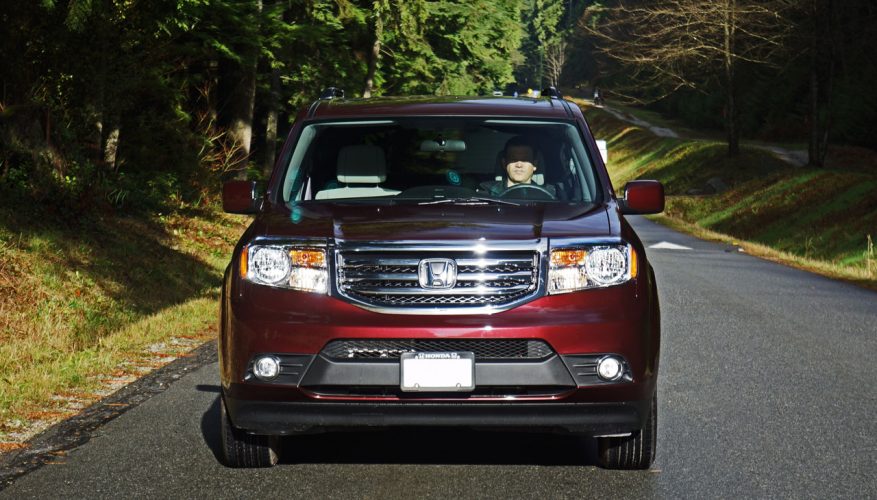 By: Trevor Hofmann
There are some vehicles I have a soft spot for even though they’re getting on in age. Like my 50-plus year old body, they might not look as fresh, handle curves as well, sprint as quickly or utilize energy as efficiently as some of the newer kids on the block, but they have a dignified air about them that instantly commands respect, and in the case of the Honda Pilot, a level of quality that’s difficult to argue against.

While the Pilot has been around for 12 years, the first generation arriving in 2002 as a 2003 model and the second generation, no longer rolling off the Alliston, Ontario assembly line, but rather out of Honda Manufacturing of Alabama’s Lincoln plant (the city not the automotive brand) in 2008 as a 2009 model, a facelift in 2012 consisting mostly of a new more heavily chromed three-bar grille, revised bumpers and lower fascias, new alloy wheels, improved audio and infotainment, plus better fuel economy gave the boxy mid-size rig new life.

The chromed grille adds class where the pre-refresh one was sportier. I’m split on which one I like better, but there’s no question about which one looks richer. The updated Pilot’s lower bumper and fascia helped to improve the look too, with fogs integrated into the black bumper cap rather than the body-colour portions. These include horizontal ribs for a windswept look, while nice detailing in the taillights and the SUV’s chromed dual tailpipes nestled under the sporty blacked-out rear valance look good. Tastefully applied chromed highlights add to the design for an SUV that’s traditionally squared off at the edges yet quite classy.

Yes, the Pilot remains as upright as it’s ever been, the ideal shape for a roomy interior. Further updates to the cabin for the 2013 model year included a new standard eight-inch multi-information TFT display, a USB input, and a standard rearview camera system, plus a multi-angle camera added to the top-line Touring package. For the 2014 model year the Pilot soldiered on unchanged, but not so for 2015 as there’s a new trim level in the mix.

The Pilot Special Edition (SE) sits square in the middle of the model’s trim range, just above the base LX 2WD and LX AWD, and just below the EX-L Res and Touring models. Getting our hands on something more commonplace than Touring trim was refreshing, as Honda has only supplied top-tier testers for the last four years. Don’t get me wrong as all the goodies are nice, but it’s sometimes better to experience a car in a lower trim level in order to get a feel for how the majority of buyers spec it out.

Inside, my SE tester had a nice light grey theme that helped to brighten up the cabin, but let it be known that the Pilot doesn’t have a lot of the same soft touch interior surfaces offered by newer competitors in the mid-size crossover class. Only the front and rear door uppers and armrests get pliable plastic surfacing, complemented by a nice woven grey fabric on the door inserts that matches the attractive grey cloth upholstery on the seats, the latter featuring a nice ribbed diamond pattern on the inserts. The dash top is hard plastic as is the front facing of the instrument panel; likewise for the centre console and just about everywhere else. Just the same the Pilot isn’t targeting the premium class, Honda leaving that job to the impressive Acura MDX that rides on a version of the same platform architecture.

The Pilot is also not the SUV for minimalists, as myriad buttons complicate the look of the centre stack. This said, I personally don’t mind such complications, as it all gives off an air of sophistication in the Pilot at least, supported by this model’s impressive display audio and infotainment system. The button theme continues in the second row seating area, as another panel of buttons, switches and RCA plugs at the back of the centre console connect through to the aforementioned rear entertainment system.

It’s also hard to knock the Pilot’s extremely accommodating interior, its tall upright design allowing for superb visibility no matter the outward angle, aided by large, rectangular windows all-round. This height provides superb headroom and ample shoulder and hip room, too. Second-row seat roominess is excellent as well, and the third row isn’t bad either, with more than enough space for my five-foot-eight frame (there was about four inches to spare above my head so a six-footer should be just fine). Getting back there is easy no matter which side you’re entering from, as the both second-row outboard seats slide forward and out of the way.

In order to comfortably tow heavy loads you need power, and the Pilot delivers reasonably good performance from 250 horsepower and 253 lb-ft of torque. To achieve this, all Pilot trims get the same 3.5-litre, 24-valve, SOHC, i-VTEC V6, a good strong well-proven powertrain that’s noteworthy for its reliability, but it can’t exactly be called modern. Featuring single overhead cams, no direct-injection, and lacking other technologies that have become popular within the last few years, the 3.5 doesn’t offer the marketing pop some rivals do, and neither does its smooth and durable five-speed automatic with manual mode. Just the same the Pilot’s claimed fuel economy rating of 13.3 L/100km in the city, 9.3 on the highway and 11.5 combined in front-drive trim, or 13.8 city, 9.7 highway or 12.0 combined in 4WD isn’t far off the leaders, likely due in part to its fuel-saving cylinder-deactivation system, which helps to minimize fuel usage under light loads by cutting power to three of its six cylinders.

As you might have guessed the Pilot’s ride is smooth and comfortable, while handling is better than you’d probably expect from such a large, boxy SUV. Road holding is helped along by its mid-size car-based crossover underpinnings, something many don’t expect to find under the Pilot because of its traditional SUV styling. I’ve already mentioned that it shares hardware with the Acura MDX, but the source of its running gear is derived from the venerable Honda Accord. Also utilizing this platform is the Honda Odyssey minivan and Ridgeline light pickup truck, the Crosstour CUV now cancelled, as were the Acura ZDX and TL luxury sedan that previously made use of the undercarriage. It’s a very rigid unibody design, which aids handling and still allows for light-duty use off road when equipped with the Variable Torque Management four-wheel drive system.

More of an all-wheel system than traditional four-wheel drive, the word “four” usually referring to an off-road capable SUV’s part-time four-wheel drive system with bull-low gearing, the Pilot’s VTM-4 system has the ability to automatically divert up to 70 percent of the engine’s torque to the rear wheels if those up front lose grip when the going gets slippery. VTM-4 is an automatic system that’s always engaged, so there’s no need to push a button or tug on a lever to put four-wheel drive into play. Rather, just go about your driving life and forget that it’s there. You might not notice it until a flash snowfall provides the backdrop for the Pilot to climb its way out of a high snowplow-made drift without a moment’s concern.

Despite its age, the Pilot continues to be a strong seller for all the reasons I’ve mentioned in this review. It’s good looking, large, comfortable and accommodating for up to eight, filled with features, and plenty enjoyable to drive. While I can’t help but get excited about what’s in store for the Pilot’s future, I nevertheless remain impressed with this current SUV that does almost everything well and then some. That it’s pretty good on fuel and ultra-reliable is reason enough for buyers to keep the 2015 Pilot on their shopping lists. You should consider it too.
©(Copyright Canadian Auto Press)
Car Shopping Tools