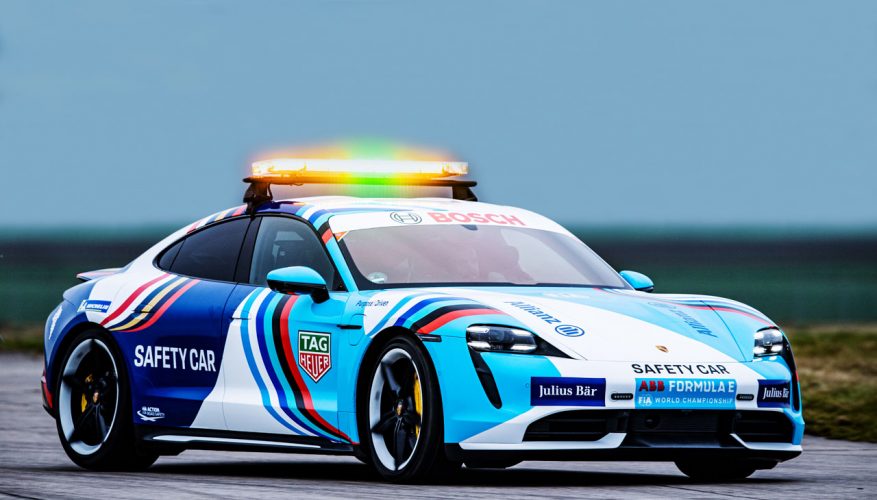 If you hadn’t already heard, the ABB FIA Formula E World Championship (kind of like an all-electric version of the F1 racing series) is heading back to Canada, although Vancouver will be the host for the 2022 event, and when the show literally gets on the road, a new Porsche Taycan Official Safety Car will be seen along with Porsche’s Formula E team.

Formula E will hit the streets of lotus land on the weekend of June 30 through July 2, which means season eight of the FIA-sanctioned all-electric street racing series will already have eight races under its belt for the 2022 season. A total of 15 races will be completed by the time the year ends in Seoul, Korea on August 14, with others taking place in Riyadh (Saudi Arabia), Mexico City, Rome, Monaco, Berlin, Jakarta (Indonesia), New York City, and London (England).

Those old enough to remember the Molson Indy Vancouver held in the city’s False Creek area during the 1990s, will know the Formula E circuit well. The electric cars will course along Pacific Boulevard, between Griffiths Way and Quebec Street, before powering down Quebec Street, between Pacific Boulevard and Central Street. A total of 56,000 spectators will be able to enjoy the spectacle from grandstands and other viewing areas, which makes it an outdoor party you won’t want to miss out on.

“We’re proud that Formula E has entrusted a Porsche with this task – one that is important for the safety of its drivers,” said Thomas Laudenbach, Vice President Porsche Motorsport. “With the Taycan Turbo S as the official safety car, we’re making an important contribution to track safety and also underlining the importance of Formula E for Porsche Motorsport.”

The three-day Formula E race weekend will also coincide with another Vancouver event held in the same False Creek setting. Canadian E-Fest will be a one-of-a-kind festival that includes a creative business conference on sustainability, plus a major esports tournament. Tickets to the event start at just $70, and can be purchased directly from the Canadian E-Fest website.

“Formula E is delighted the Porsche Taycan Turbo S will serve as the Championship’s safety car from Season 8,” said Jamie Reigle, CEO of Formula E. “The Porsche Taycan Turbo S is the pinnacle of high-performance electrified vehicles and will light up Formula E city racetracks around the world. In designing the Formula E safety car, Porsche reimagined the critical on-track safety function to be a powerful symbol of the championship’s commitment to an electrified future and the unity of the competitors in the ABB FIA Formula E World Championship.”

Incidentally, the new Formula E Safety Car is based on the 2022 Taycan Turbo S, the most capable variant of Porsche’s plug-in electric sport sedan. The new Turbo S is capable of sprinting from zero to 100 km/h in just 2.8 seconds, due to 750 horsepower (with Overboost) and 774 lb-ft of torque with Launch Control engaged, while it is also able to zip from standstill to 160 km/h in only 6.1 seconds. The 2022 Taycan, which now comes in three different body styles and many more trims, ranges in price from $119,900 and $218,000 (plus options).