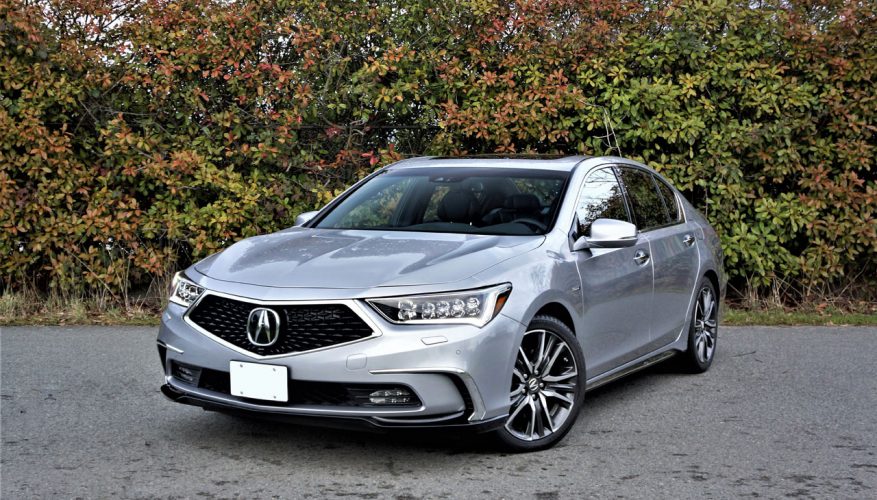 I certainly like the look. Acura first applied it to their mid-size 2017 MDX crossover SUV and more recently the 2018 TLX sport-luxury sedan, both having seen year-over-year sales growth since their updates, while the refreshed 2018 RLX Sport Hybrid has experienced a significant 33.3-percent uptick in its Canadian deliveries since it arrived in January.

Of course, there’s much more to the redesign than a new grille. For starters, Acura’s Precision Crafted Performance design language affects the entire front fascia, hood, side skirts, trunk lid, rear bumper, diffuser-like lower valance, new dual exhaust finishers, and machine-finished alloy wheels, not to mention its modernized set of five-element Jewel-Eye LED headlights displaying new LED character strips around their outside edges, and totally reshaped LED taillights. From front to back the new RLX is a much sportier, much more emotive design, which should really appeal to the car’s loyal fan base and hopefully attract more would-be buyers to the value-packed model’s camp.

Anyone who’s driven Acura’s RLX Sport Hybrid knows it’s an especially impressive sport-luxury sedan, especially in top-line Elite trim. It has simply suffered from forgetful styling, which has arguably been fixed with this effective mid-cycle makeover. Fortunately its performance-oriented hybrid drivetrain and wonderfully balanced suspension needed no modification, the former carrying forward with 377 net horsepower and 341 lb-ft of torque.

Similar to Acura’s fabulous NSX Sport Hybrid supercar and the brand’s most family-oriented MDX Sport Hybrid, the RLX Sport Hybrid uses a three-motor powertrain with electric torque vectoring. A tried and tested naturally aspirated 3.5-litre V6 powers the front wheels in concert with an electric assist motor, this most fuel-efficient combination used as a default in dry weather or under light loads, but if increased throttle input, hard cornering, or driving on slippery surfaces causes the need for rear-wheel propulsion an electrified version of Acura’s torque-vectoring Super Handling All-Wheel Drive (SH-AWD) provides traction from all four tires via two rear wheel-mounted electric motors.

Acura calls this system Sport Hybrid Super-Handling All-Wheel Drive (Sport Hybrid SH-AWD), resulting in a long enough name to make any Teutonic carmaker proud, and while it’s a particularly advanced hybrid powertrain, its sophistication only scrapes the surface of all the technology aboard the RLX.

Before delving too deeply into the latter, take note that the front-wheel drive-only version of the RLX, available in the U.S., is not sold in Canada, which means its 310 horsepower V6, new 10-speed automatic transmission, Precision All-Wheel Steering (P-AWS), and lower price point remains exclusive to our friends to the south. Of course, if there were a reasonable enough market for it here, we’d see it. Let’s just be glad Acura Canada chose to provide us with the much more formidable RLX Sport Hybrid instead of the opposite scenario, as I certainly wouldn’t have enjoyed my weeklong test anywhere near as much.

Yes, where the previous RLX Sport Hybrid was surprisingly fun to drive for its conservative appearance, the new model lives up to its sporty outward character. It moves of the line with zero hesitation, shooting from standstill to 100km/h in just 5.6 seconds, and shifts through its seven-speed dual-clutch Sequential SportShift gearbox with slap shot responsiveness, Acura providing steering wheel-mounted paddle shifters, Grade Logic Control and a Sport mode to make the process as engaging as possible, yet smooth and composed.

A BMW M5 it’s not, nor a Mercedes-AMG E63, but the RLX Sport Hybrid is a stimulating drive that provides a proper upgrade for those trading in their TLX A-Spec. The Sport Hybrid’s unique SH-AWD system defies the big sedan’s obvious girth, its actual curb weight measuring in at 1,993 kilos (4,394 lbs) in top-line Elite trim, which is a mere 18 kilograms (40 lbs) more than the base model. Still, it never feels overly heavy thanks to a nice flat stance during sharp transitional moves, positive engagement from its big, sticky 245/40R19 all-seasons, and strong braking despite repeated stomps, the RLX confidence-inspiring when driving quickly.

The RLX Sport Hybrid provides big initial savings as well. With a starting price of just $65,490 it hits the road for $1,360 less than the just noted Audi, $4,310 more affordably than the Mercedes, and $5,060 easier on the wallet than the BMW, while its list of standard features should at the very least make the Germans feel awkward.

The updated 2018 RLX carries forward with the AcuraWatch suite of advanced driver-assistance systems too, including forward collision warning with autonomous collision mitigation braking, blindspot monitoring and lane departure warning with lane keeping assist and road departure mitigation, plus rear cross-traffic alert, which once again earns it an IIHS Top Safety Pick rating, while new for 2018 is Traffic Jam Assist that uses the Low Speed Follow function of the adaptive cruise control system to semi-autonomously maintain the flow of slow-moving congested traffic, a first for Acura.

AcuraWatch combines millimeter wave radar together with monocular camera sensing technology in order to detect lane markings and surrounding vehicles, which not only keeps the car within its lane, but can also intervene in order to prevent a collision or mitigate the severity of impact.

The move up to Elite trim adds $4,500 to the bottom line yet includes plenty of features to make up for it including extra exterior chrome, auto-dimming side mirrors, front and rear parking sensors, a 360-degree surround-view parking monitor, ventilated front seats, ambient rear passenger’s footwell lighting, rear side sunshades, a powered rear sunshade, and a sensational Krell ultra-premium audio system that might be worth the price of entry alone.

All of this comes in a cabin that’s even more upscale than last year’s RLX, due to higher grade materials in key areas, soft touch surfaces throughout, beautiful aluminum and wood trim, well damped, nicely fitted switchgear that includes one of the more innovative pushbutton gear selectors in the industry, plus redesigned seats that are oh-so comfortable and supportive while trimmed out with sporty contrast stitching. Mine were done in Ebony to complement the Lunar Silver metallic paint, but no-cost Seacoast beige, Greystone light grey, and Saddle Brown are available as well, depending on your exterior colour choice.

If the RLX has a weakness it’s the digital interfaces displayed throughout, the highly legible analogue gauge cluster incorporating a fairly simple colour TFT multi-information display at centre instead of a fully configurable gauge package, while the centre stack houses Acura’s now outdated two-tiered infotainment system. It gets bonus points for providing multiple functions simultaneously, a process that normally requires a split screen and therefore a reduction in space for individual functions, but the setup looks and feels a bit old school when compared to those used by most mid-size sedan peers, especially the aforementioned E-Class that can be had with a massive 24.6-inch tablet-style primary gauge/infotainment system (comprised of two seamlessly fused 12.3-inch displays) that makes anything else look passé. Acura isn’t alone with this problem, but none of the mid-size E-segment’s top sellers suffer from first-generation iPad syndrome (hey, I could’ve compared it to the Palm Pilot, Samsung’s GRiDPad or Apple’s Newton). Its graphics are stale, colours and depth of contrast lacklustre, and functionality remedial when compared to some of the better systems now on offer, but its surround camera is very good and navigation extremely accurate.

I like the RLX Sport Hybrid too much to leave this review on such a sour note, so suffice to say if you don’t find yourself glued to a smartphone or tablet every hour of the day you’ll probably be more than happy with the big Acura’s electronics, while the rest of the car has long been a joy to drive or be driven in. Now that it’s outward appeal matches its inner qualities, performance being key, I think it’s one of the more intelligent sport-luxury sedan purchases available today.