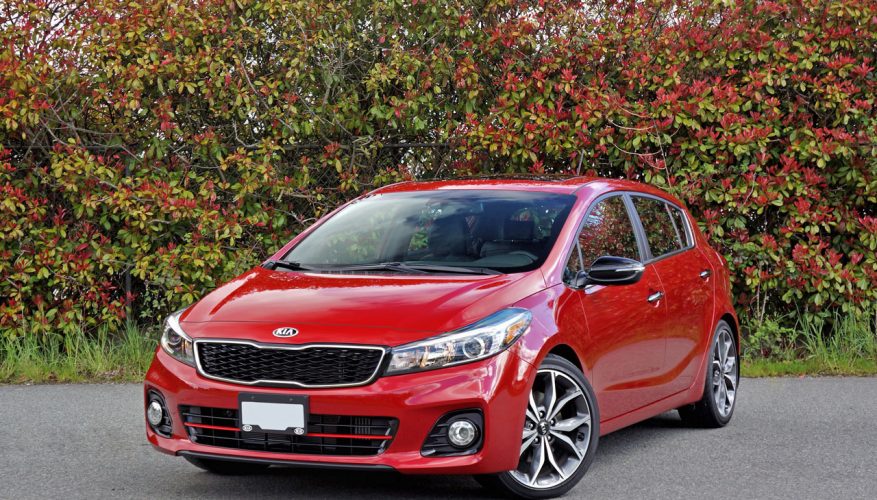 By: Trevor Hofmann
Kia has thoroughly refreshed its second-generation Forte5 for 2017, and it even looks better than the already stylish outgoing version. I’ve long found the Forte an attractive compact, whether in five-door hatchback, four-door sedan, or two-door coupe guise. The coupe, or rather Koup, was discontinued at the end of 2016 in the U.S. and continues unchanged here in Canada, so you’ll need to step up to this Forte5 or the Forte sedan in order to enjoy all the improvements.

The 2017 Forte5 featured here is in top-tier SX trim, which is exactly how I’d option this car out if my name were on the ownership papers. Last year I would’ve been stumped about whether to stick with its standard six-speed manual or upgrade to the seven-speed dual-clutch automated gearbox with paddles, but now if you want the top-line engine with the manual you’ll either need to buy one from the U.S. or walk across the street to your local Hyundai dealer and ask for the Forte SX’ brother from another mother, otherwise known as the Elantra Sport, as the six-speed manual equipped version I drove and reviewed earlier this year provided the kind of short-throw performance feel that enthusiast purists want, but the quicker shifts and paddle action from the Forte SX’ autobox made this car a lot of fun too, plus you get the obvious convenience factor.

While I’ve got a lump in the back of my throat from losing yet another manual gearbox, the Forte5 SX’ zesty 1.6-litre turbo four-cylinder engine managed to put a smile back on my face.  It makes 201 horsepower and 195 lb-ft of torque, which puts it a solid 37 horses and 35-lb-ft further ahead than the already sufficiently potent base 2.0-litre four. That’s a lot of pull, resulting in a zingy hot hatch that’s plenty entertaining.

Honda’s Civic Si and VW’s Golf GTI immediately come to mind as competitors, and while I hesitate to claim one over the other, especially because these Japanese and German models are iconic sport compacts and this much more competent Forte 5 SX is still in the process of building its legend, Kia is almost in the same league as far as non-gearbox related driving dynamics go. The little turbo four provides plenty of jump off the line, superb acceleration as speed ramps up, and the gearbox works wonders with nice crisp shifts and well spaced intervals.

Likewise the chassis knows what to do with all that power, sorting out all but the most unsettling patchwork pavement competently despite a rudimentary torsion beam axle in back, the big 18-inch alloys on 225/40 Nexens aided by some stiffer sport tuning that still allows some give for a comfortable ride. Braking is strong too, Kia adding 0.8-inch larger 11.8-inch front discs and 10.3-inch rotors in the rear for greater stopping power.

It all works best when the selectable driving modes are turned to Sport instead of Normal or Eco, although the latter results in a potential 9.4 L/100km in the city and 7.9 on the highway.

While good fuel economy numbers reduce ongoing costs, Kia is better known for value at the time of purchase. Case in point, this Forte5 SX starts at just $29,895 plus freight and fees yet comes loaded up like a premium compact, with the list of standard features not yet mentioned including auto on/off HID headlamps, LED positioning lights, fog lights, LED light bar taillights, LED turn signals in the side mirrors, dual stainless exhaust pipes, not to mention unique front and rear fascias, a rear rooftop spoiler, plus piano black side mirror housings and door handles for a little extra style, and that’s just outside.

It looks and feels like a little luxury car inside too, which all comes together to form that value proposition noted a moment ago. No wonder the Forte is selling so well in a car market that has experienced steady erosion over the past couple of years. Some of its competitors are even being cancelled altogether, but the Forte is currently on target for its best Canadian sales ever.

From personal experience of driving and reviewing five Fortes since introduced for 2010, I can honestly say it’s about time the market caught on to how good this compact model is. I can speak similarly for most of the brand’s current offerings, Kia a mainstream volume brand that delivers much more than its value-oriented pricing suggests, and backs up its entire line with one of the better warranties in the industry at five years or 100,000 kilometres.

Even more brag-worthy, Kia landed on top of the entire auto industry in J.D. Power and Associates’ most recent 2017 Initial Quality Study, while its 2017 Vehicle Dependability Study score placed it in the top five of all mainstream volume brands. What’s more, a new top-five standing in Consumer Reports’ latest Annual Reliability Survey is news worth sharing too. In other words, anyone still having qualms about driving a Kia had better give their head a shake.

Unless you’re dead set on a manual gearbox and/or prefer the high-speed stability of a fully independent suspension and don’t mind paying extra for it, the new Forte5 SX is a hot hatch you should consider. It looks great, is impressively finished, comes loaded with features, adds two years of free warranty, and most importantly in this class, it’s loads of fun to drive.
©(Copyright Canadian Auto Press)
Car Shopping Tools