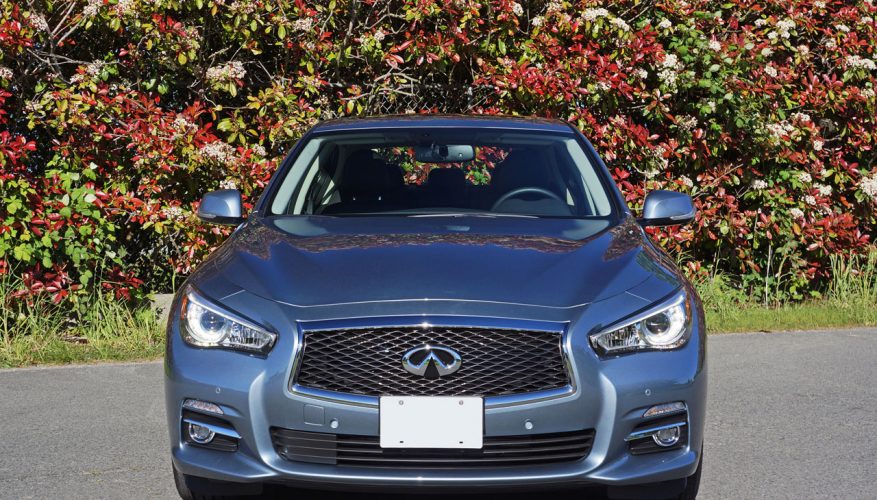 By: Trevor Hofmann
A quick glance at the 2016 Q50 doesn’t show much about what’s going on behind the scenes, but pop open the beautifully sculpted hood and it’s an entirely different story.

The Q50 underwent a complete redesign for 2014 at which point it left its G series past behind and took on its current Q designation, and no one is complaining about its styling. Even well into its third model year it remains one of the more attractive in its highly competitive compact D-segment luxury class, but after this latest year there are many more reasons to sit up and take notice.

The car’s previous strength had become its weakness of late. Last year all Q50s came with a standard V6 that walloped each and every rival when it came to base output, the 3.7-litre engine’s 328 horsepower and 269 lb-ft of torque delivering unparalleled bang for the buck yet still not satisfying two important types of customers. The first group are the world’s regulatory bodies that keep demanding ever more stringent fuel economy and emissions standards, and the second are buyers that want all the luxury and dynamic handling offered by the Q50, but not the fuel expense. As it turns out there aren’t anywhere near as many buyers for the latter as bureaucrats enforcing the former, but the end result is nonetheless a very pleasing road car.

Rather than reinvent the wheel, or in this case the four-cylinder engine needed to achieve Infiniti’s fuel efficiency goals, the premium Japanese brand chose to partner with one of the most revered names in the luxury sector, Daimler which makes Mercedes-Benz. The result is a rebranded version of the German manufacturer’s 2.0-litre turbocharged four-cylinder, produced in Tennessee. The proven engine is a bit low on power compared to most competitors albeit big on torque, exactly what’s needed to make a well-equipped luxury car move down the road quickly. The numbers read 208 horsepower and 258 lb-ft, its peak torque arriving at a mere 1,500 rpm, while fuel economy goes from 12.5 L/100km city and 8.7 highway for last year’s 3.7 to a much more agreeable 10.6 city and 8.4 highway, assisted in part by an auto start/stop system that shuts the engine off when it would otherwise be idling. That’s not quite as good as the 8.7 city and 7.6 highway rating for the Q50 Hybrid, but it’s still very good.

If Infiniti had left the story there, sales would’ve fallen off a cliff as its diehard enthusiast fans went searching for new prospects, but smartly the Japanese brand widened its engine lineup with two variants of an all-new twin-turbocharged V6. As planned, the more modest of its two 3.0-litre units would become the Q50’s bread and butter powertrain thanks to an energetic 300 horsepower and 295 lb-ft of torque and a still more fuel-efficient rating of 12.3 L/100km city and 8.5 highway, while a new top-line variant has pushed the brand up into AMG and M territory thanks to 400 horsepower and 350 lb-ft of torque, while nevertheless proving economical with a rating of 12.3 city and 9.1 highway.

I tested the Q50 Red Sport 400 last time around and therefore wanted to dip my foot into the throttle of the entry-level powerplant. I must admit I was expecting to be thoroughly underwhelmed, which was probably why it left me in such a positive state. First off, despite its seven forward gears the Q50 2.0t’s automatic is not from Daimler, but instead is the same wonderfully advanced seven-speed autobox sourced from Nissan’s Jatco division that most other Infiniti models enjoy. Long one of the best automatics in the business, it features downshift rev-matching and adaptive shift control (that can even be navigationally synchronized when equipped) resulting in a much better pairing than this engine gets from Mercedes. That said the German brand’s competitive C 300 4Matic doesn’t use the same tuning, but instead benefits from a 241 horsepower alternative. Instead, the Q50’s base engine comes standard in the Mercedes CLA 250, GLA 250, and the new Infiniti QX30 that shares much with the latter subcompact Merc SUV.

As noted, the four-cylinder feels a lot more lively than its aforementioned numbers suggest, response from standstill immediate and acceleration reasonably brisk when pushed; zero to 100km/h taking 7.4 seconds. It even sounds nice, unlike some others in this class that cause me to pull up next to the yellow diesel pump despite their 91-unleaded requirement, while less weight over the front wheels results in a lighter, nimbler chassis that’s plenty of fun through the corners yet just as stable as V6-powered Q50s at high speed.

Included is Infiniti’s Drive Mode selector with Standard, Sport, Snow, Eco and Personal settings to make the most of near any mood or road condition, with Eco perhaps a bit too yawn inducing for my tastes and Sport a positive step in the right direction. So selected, the seven-speed auto snaps through its gears with impressive speed and supreme smoothness, although without paddles I wouldn’t be handing it any awards for engaging the driver. Still its gear lever allows plenty of right hand action when required, but I can’t help but wonder if the majority buying into this base model will bother. This is entry-level luxury with sporting tendencies, whereas true performance aficionados will certainly ante up for the previously noted 3.0t, 3.0t Sport or Red Sport 400.

To this end the base model’s ride is quite compliant and handling very satisfying, this the only trim to utilize speed-sensitive hydraulic electronic power steering instead of the next level up that gets RACK EPS or optional Direct Adaptive Steering. The most basic car does include Active Trace Control, mind you, which automatically modulates engine torque and braking to improve cornering feel, while the Q50’s inherently well sorted double-wishbone front and multi-link rear suspension, augmented with coil springs over dual flow path dampers and a stabilizer bar forward and rearward, provide all the mechanical grip needed. Lastly, the entry Q50 gets sizeable 12.6-inch front and 12.1-inch rear ventilated disc brakes for impressive stopping power and very little fade after repeated applications. Again, performance is strong across the board, but to be clear this lesser model is optimized for comfort and quietness.

Luxury in mind the Q50’s traditional approach will appeal to those who prefer high quality quilted leathers, brushed and polished metals, plus optional woods. My tester featured black soft synthetics and leathers joined by various metals instead of natural grains, with a general aura of quality pervading the cabin waist-height and above. Yes, Infiniti spends more money where eyes and hands normally land, with the usual premium trappings including fabric-wrapped pillars, a plush pliable plastic dash top, instrument panel and door uppers, yet more padding for the door inserts, leatherette covered contrast stitched armrests, and fairly natural feeling pleather seat upholstery. Even the glove box lid is soft synthetic, but the lower door panels and lower IP, next to your knees, are made from less appealing harder plastics. Still, the sides of the lower console are finished better than most any competitor, with padded leatherette that’s contrast stitched to match the seats, armrests and leather-wrapped steering wheel.

Interestingly, with this new four-cylinder model Infiniti has repositioned the Q50’s pricing about $50 higher than last year’s V6-powered model, at least before it was discounted to $37,500 later in 2015 to make way for the 2016s. Still, its new price of $39,900 makes it one of the pricier vehicles in its class, only exceeded by the more basic $39,990 BMW 320i xDrive and expectedly higher priced Mercedes-Benz C 300 4Matic, plus Jaguar has just arrived with its 2017 XE that’s priced at a no excuses $48,500-at least the Brit’s got balls, especially considering its cabin uses more low-end hard plastics than the Q50 and most others in the segment.

Infiniti always impresses when it comes to the quality of its switchgear, the Q50’s circular infotainment controller even featuring knurled metal edges, but it’s the set of electronic interfaces this rotating and touch-sensitive dial actuates that deserves special mention. Actually, the console-mounted device and surrounding buttons only connect to the upper-most display, the lower one a touchscreen that lets your fingers do the walking. Either way, the resolution and crisp detail of both monitors is excellent, as is the depth of contrast and colour quality, although I found their system processes a bit challenging to initially figure out, especially after living with some of the latest Apple CarPlay and Android Auto infused competitors. On this note InTouch launch apps only include Facebook and an Online POI search, with many owners complaining about Infiniti’s slow technology adoption on forums. Then again, its three quick access Menu, Audio, and Climate buttons made quick work of finding regularly adjusted features, while the optional surround camera was superb, even showing the direction of the front tires to help with parking, and as always Infiniti’s available navigation is spot-on accurate, plus it includes clear and precise mapping.

After running down each and every standard feature the Q50’s only obvious shortcoming is the size of its 17-inch alloys, which look out of place on a car that’s slightly larger than its key rivals. As noted the 225/55R17 all-season runflats perform well enough, and certainly do their part to improve ride quality and reduce interior NVH levels, but alas luxury is so much about image isn’t it? Then again you may appreciate the practicality of smaller rims when it comes time to replace these, as a set of four will be much less expensive to procure than 19s or 20s, but the segment’s usual standard 18s aren’t much pricier and look decidedly better. Oddly, Infiniti offers no wheel and tire upgrade for this base Q50.

The Premium package is prerequisite for choosing the $2,000 Driver’s Assistance package that would likely have earned the Q50 IIHS Top Safety Pick Plus status if it weren’t for a merely “Acceptable” front small front overlap crash test (everything else got top “Good” marks while its optional front crash prevention tech was deemed “Superior”). These items include the package’s predictive forward collision warning and autonomous forward emergency braking, while additional package features include blindspot warning, back-up collision intervention, rain-sensing wipers, and a 360-degree Around View Monitor with moving object detection, plus front and rear parking sensors.

One of the Q50’s most appealing characteristics is size, larger folk finding it comfortable up front and more than adequately proportioned in back where legroom rivals some mid-size luxury sedans. Specifically I found about four inches head of my knees when the driver’s seat was set to my five-foot-eight height, with three inches left over my head. The seat is comfortable with good support, plus an armrest with the usual integrated cupholders folds down at centre.

The trunk’s 374-litre (13.2 cubic-foot) capacity isn’t the largest in this segment, but a centre pass-through and a 60/40-split make it expandable, so therefore it offers advantages when trying to optimize passenger and cargo space.

In summary, the new Q50 2.0t AWD isn’t perfect but it’s a solid entry-level luxury sedan in a very crowded, highly competitive field. Its performance is stronger than a base 3 Series and should easily satisfy bargain focused D-segment buyers, while the car’s optional powertrains are very impressive, especially when factoring in value for money spent. All-round the Q50 remains a fairly strong seller thanks to that value proposition, and should be considered a worthy alternative if you’re already on the hunt for one of its rivals.
©(Copyright Canadian Auto Press)
Car Shopping Tools