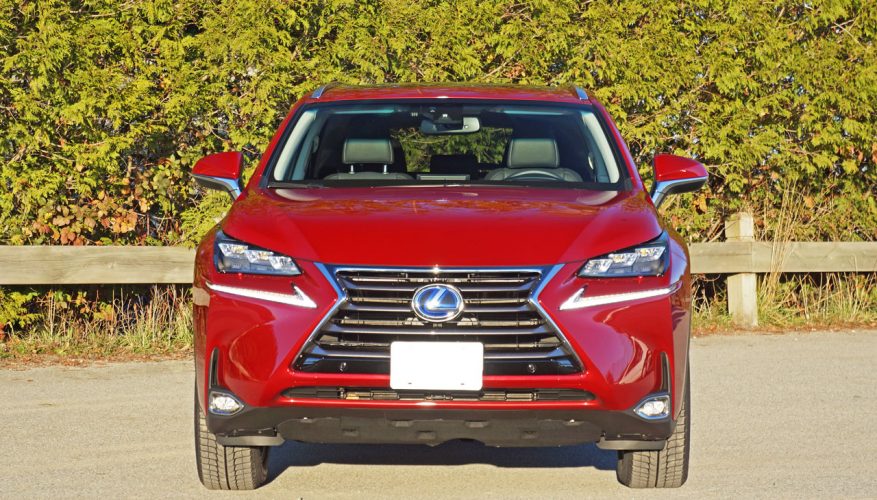 By: Trevor Hofmann
If you hadn’t heard, the Lexus NX is a runaway sales success. You may have noticed the edgy compact crossover cruising through better neighbourhoods lately; I’ve certainly seen my fair share. It’s an eye-catching addition to its ever-expanding market segment, but this said the response it’s had with premium consumers is especially impressive for a newcomer because it’s hardly without both fresh and longstanding competition.

The luxury compact crossover SUV segment is one of the fastest growing in the entire automotive sector, both in overall sales as well as models being added. It’s now up to nine individual entries, or 10 if you include the new Mercedes’ GLC that’s temporarily selling alongside the soon to be discontinued GLK. That last model is one the NX passed right on by in year-to-date sales, along with BMW’s X3 and every other compact luxury SUV other than the Audi Q5 and Acura RDX, now sitting pretty in third place in both Canada and the U.S. I’d say it’s been an important new addition to Lexus’ SUV lineup.

When I refer to “compact SUV” I’m not talking about the premium subcompact SUV segment that Lexus has yet to join. It’s sometimes referred to as compact although it’s filled with smaller alternatives such as Audi’s VW Tiguan-based A3, BMW’s X1, Mercedes’ GLA and soon Infiniti’s QX30, amongst others, so while on one hand Lexus had better get a move on so as not to miss out, I think we should just be glad they’ve finally decided to expand downward into the compact class and be done with it.

Over the first 11 months of this year there were 5,744 Canadians and 38,630 Americans so glad that Lexus came to market with the NX that they anted up with their wallets. They purchased the NX in base 200t guise with no added package as well as this model in Premium, Luxury and Executive trims, or like I tested it previously previously in one of its two F Sport trims (now three for 2016), while a smaller number have chosen the more efficient NX 300h, only available in one base trim last year, but upgradable with an Executive package now.

That’s what Lexus gave me to drive this time around. If you read my review of last year’s Nebula Grey Pearl-painted NX 200t F Sport you’d see I came pretty close to gushing, and while I wasn’t quite as moved by my more recent Matador Red Mica finished 300h Executive loaner, at least as far as emotive styling and forward motivation go, it improved my mood when it came time to fill up.

The first thing I noticed when taking delivery of the NX 300h was its toned down grille, Lexus no doubt choosing the subdued look to make this greener model appeal to a less extroverted clientele, the F Sport’s deeper, wider and altogether grander spindle grille about as attention-getting as this segment gets. Call me a showoff if you want to, but that model’s wow factor does something to me that this version’s subtler approach doesn’t, yet I still appreciate that even this more conservative approach is miles more alluring than what most others in this segment have to offer. Following this quieter, more thoughtful theme is a less pronounced lower fascia with unique fog lamps in chrome bezels, although my Executive packaged tester’s full LED headlamps include some pretty flashy triple-stacked hardware. Satin-silver painted five-spoke alloys round out the wheel cutouts instead of the F Sport’s racier machine-finished, black-painted rims, both measuring 18 inches but the sportier SUV’s making more of a statement, while totally unique thin chrome slats are housed in the rear valance where tailpipes usually go, giving the car an electrified appearance, as if it doesn’t even need an internal combustion engine to function.

Of course, we know this isn’t the case. Under its hood is the same 16-valve, DOHC, 2.5-litre Atkinson-cycle four-cylinder as offered in the ES 300h, complete with a NiMH battery, electric motors and a continuously variable transmission. Its 194 net horsepower doesn’t make it as energetic off the line as its closest rival, Audi’s Q5 Hybrid, and I’m talking about the German ute’s regular performance, not the extra dose it delivers when right foot gets mashed to the floor. I’m not saying the electrified NX can’t keep up with traffic, but it’s a decidedly more docile conveyance than either the four-ringed competitor or its own 200t variant. At low speeds, up to about 40 km/h, for short distances it’ll run on EV power, which is nice for cruising through parking lots or when trapped in stop-and-go traffic, while its standard all-wheel drive manages slippery mid-winter takeoff and high-speed control well, wheel slippage causing a second 67-horsepower rear-mounted electric motor to engage the back wheels. The front electric motor/generator takes care of the majority of motive assistance, the aforementioned CVT transferring twist to the front wheels.

While the NX 300h doesn’t feel as raring to go as the 200t even when its driving mode selector is dialed all the way over from Eco to Sport, Lexus endowed it with a kick-down mode for passing that results in snappier response and a nice linear power curve. More importantly to most in its target market, I’m guessing, is how it goes about regular day-to-day driving. It’s completely smooth and thoroughly comfortable around town, while it cruises highways and byways wonderfully. Its handling isn’t as edgy without the F Sport’s suspension upgrades and the hybrid’s front to rear Dynamic Torque Control-enhanced E-Four AWD is a wholly different system than the 200t’s, but its upgraded front gas struts and otherwise identical fully independent suspension setup makes for a very capable and stable CUV when tackling a curving back road or just circling a cloverleaf at faster than posted speeds. Lexus partially achieved this by splitting the battery pack in two and distributing its weight more evenly from front to back, although you’d never know there was anything under there if no one had told you.

The 300h’s passenger volume is identical to the conventionally powered NX, down to the millimeter front to back. That means it’s quite sizable for the class, with ample roominess up front for most body types and room for two very comfortable adults in the rear, or three without the benefit of the folding centre armrest. There are some volumetric shortcomings with cargo space and fuel tank capacity, mind you, but I doubt many would notice. With respect to the former the hybrid’s 475-litre (16.8 cubic-foot) maximum volume behind the rear seats is 25 litres (0.9 cubic feet) less than the 200t, yes I know, whoopty doo, while folding its 60/40 split seatbacks forward, which was achieved by powered operation in my tester I might add, results in the same 25-litre (0.9 cubic-foot) luggage space loss with a fully expanded maximum of 1,520 litres (53.7 cubic feet) available. The gas tank is more dramatically affected, its 56-litre volume down four litres from 200t trim, but you won’t likely need as much fuel in this hybrid, so it’s a moot point.

Yes, the 300h may not be the most exciting luxury crossover to drive, but its fuel economy might instill a different kind of enthusiasm. Where the NX 200t does pretty well with a claimed five-cycle EnerGuide rating of 10.8 L/100km city, 8.8 highway and 9.9 combined, the 300h delivers a shockingly good 7.1 city, 7.7 highway and 7.4 combined, these figures aided by auto start/stop and regenerative braking. Those are numbers I can live with, although I’m a journalist and merely pay the fuel bill at the end of the week, unlike you the consumer who actually forks over a single lump sum at the time of purchase or more often than not regular monthly charges from your bank account along with interest.

To that end the NX 300h might give you some pause over the 200t, even when similarly equipped. Lexus has smartly eliminated its one-trim-fits-all pricing strategy that no doubt limited 300h sales for model year 2015, this 2016 available in Premium trim that now starts at $53,350 plus freight and dealer fees instead of $59,450 for last year’s base model; the 300h with the new Executive package starts at an even $60,000 now. That Executive designation is shared with the top-tier 200t, although there’s no Luxury trimmed variant in between with the hybrid.

On top of this my Executive trimmed tester included auto-leveling headlamps with auto high beams, rain-sensing wipers, a head-up display, clearance and backup sensors, dynamic radar cruise control, the Qi wireless charging system, a 10-speaker audio upgrade, the powered rear seats with switches on the dash and in the cargo area, blind spot monitoring with rear cross traffic alert, lane departure alert with steering assist, a pre-collision system, and beautiful Shimamoku hardwood trim, although I found it strange that you can’t get it with real leather upholstery.

What you do get, mind you, is one of the nicest interiors in the compact SUV class. Unlike some that base a premium model on a mainstream volume vehicle and don’t differentiate smaller details like switchgear, especially steering wheel stalks and power window switches, not to mention graphic interfaces, the NX shows as little of its RAV4 roots inside as out. In other words you’ll be searching for a long time to find any direct carryover components, only this 300h version sharing its powertrain with the new 2016 RAV4 Hybrid. Lexus has gone to great lengths to make sure upwardly mobile RAV4 owners won’t be questioning why they should pay more for an NX, even rewording and changing the colour of the similarly shaped ignition button. The rest of the NX’ buttons, toggles and knobs are as unique as can be, and very high in quality, while the overall design is a particularly attractive mix of hard edges and soft curves, much of which have been asymmetrically drawn, with more soft-touch contrast stitched leather-like surfaces than you’ll find in most competitive compact SUVs. Stylish satin-silver metallic trim outlines key components, such as the dual-level centre stack, while thoughtful touches like a small compartment on the lower console with a mirror-backed removable leatherette lid is an obvious nod to the finer sex.

The black and white threaded theme continues to the ultra-comfortable seats, which were as noted covered in Lexus’ NuLuxe pleather. I have to admit that this was the second time NuLuxe fooled me into thinking this top-line 300h was outfitted with genuine perforated hides, so convincing is this man-made stuff, while on the positive it’s more vegan and environmentally friendly.

I could go on infinitum about all of my tester’s details, the clarity and brightness of the primary gauges and integrated multi-info display, the various benefits of the head-up display, how much better the new infotainment controller works, the various info, audio, media, phone and system setup functions within, the accuracy of its navigation system and clarity of its backup camera, how great the audio system sounded, all of its comfortable padded surfaces and impressive componentry, as those who read my review of the 2015 NX 200t F Sport will remember. I was so impressed that I probably dissected and then described every square inch of that SUV, and I was equally wowed by the quality, fit, finish and overall goodness of this one. It’s a premium crossover that won’t ever cause you to wonder why you paid so much, especially now that the 300h model’s price has become more affordable.

Along with the excellent fuel economy and low emissions the NX 300h is ultimately quiet, rides sublimely, handles well and is a dream on the highway, really the perfect compact luxury SUV. While I’d take mine in 200t guise with the new F Sport 3 upgrade, I can appreciate that some people lean more towards luxury than sport. That Lexus does both so very well is a testament to how far the brand has come over the past 26 years and a win-win for its many loyal fans.
©(Copyright Canadian Auto Press)
Car Shopping Tools