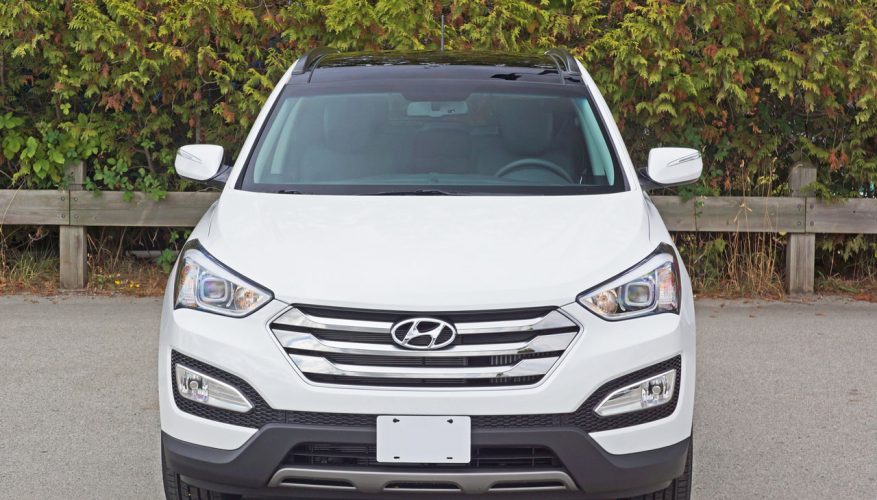 By: Trevor Hofmann
It’s hard to believe the Santa Fe is entering the final year of its current third-generation body style, because it still looks so good. That’s the sign of good design, and reason enough for such strong continued sales. Hyundai sold 32,474 of its regular wheelbase Sport model and long-wheelbase XL during the last calendar year, while the mid-size crossover SUV shows little sign of slowing this year either.

I’ve been a fan of the Santa Fe since the second-generation arrived on the scene in 2006 as a 2007 model, and became an even more ardent proponent since this third-gen iteration hit the scene in 2012 for the 2013 model year. The original was a good SUV too, although I never warmed up to its styling, but the design progression shown since is evidence of just how far Hyundai has come in all respects over the past decade.

Even when combining this list’s group of seven bottom feeders (which include all three of General Motors’ mid-size CUVs) the Santa Fe duo comes out on top, or for that matter adding up all the mid-size offerings from the big four Japanese brands including Toyota, Nissan, Honda and Mazda. And I’m not even including the Kia Sorento in these numbers, which rides on the same platform architecture, uses the same engine lineup and no doubt shares other components beneath the skin. With close to 50,000 sales combined in 2014, the South Koreans own this segment, and for very good reason.

Going back to styling, my Santa Fe Sport 2.0T SE tester is a knockout. The SE is the sportiest version of the shorter Sport body style, with the SUV’s already sharp looking three-slat dark chrome grille front and centre, beautifully detailed projector beam headlamps at each corner, plus cool LED positioning lamps, chrome trimmed fog lights, chromed door handles, LED turn signals set into the mirror caps, slim black roof rails arching overtop, the latter ideally matching the shiny black roof caused by this trim line’s standard panoramic sunroof, not to mention blackened rear privacy glass, sporty rear spoiler, and metallic under-tray set into the lower front fascia continuing the premium theme right around the vehicle where a metallic diffuser-like rear bumper cap with twin chromed tailpipes emit yet more of a performance image. It looks particularly good in my tester’s Frost White Pearl paint, a nice backdrop to the SE’s fabulous machine-finished Y-spoke 19-inch rims with dark silver painted pockets wrapped in 235/55R19 all-season rubber. All-round the Santa Fe is still one of the best looking in its class, especially from the rear where its wonderfully complex taillights could be from a much pricier luxury ute.

Walk up to the door, press the tiny black button on the handle and the key fob in your purse or pocket tells the proximity-sensing locks to let you in, the same process making ignition just as easy via pushbutton start. All Santa Fe trims are a step above most competitors when it comes to premium-level plastics, switchgear quality and attention to detail, with soft-touch synthetic surfaces applied to the dash top, instrument panel, front and rear door uppers and inserts, plus beautifully designed stitched leatherette armrests with metallic trim, impressively finished leather wrapping around the steering wheel and shift knob, leather seats done out in perforated hides for better ventilation, gorgeous authentic looking and real feeling faux wood across the dash, a brilliant primary gauge package featuring electroluminescent Supervision dials plus a high-resolution colour 4.2-inch TFT LCD multi-information display that’s well shrouded from exterior light, upscale metallic-edged illuminated power window switches, controls on the steering wheel and centre stack that are at least as nice, especially the HVAC interface that includes a large LCD display, and attractive blue ambient LED lighting under the centre stack, not to mention rich looking aluminum doorsill plates greeting you before even climbing inside.

The Santa Fe’s only weakness is its somewhat small and dated looking 4.3-inch infotainment display, easily remedied if you move up to Limited trim where a much more attractive eight-inch touchscreen includes navigation, but while the base system is quite functional and easy to use the Santa Fe’s competitors are now including significantly larger graphic interfaces on lower trims, some even with their base models. It’s a sign of the times. If you’re still staring at a small first-generation smartphone you’re considered Neanderthal at the Starbuck’s counter, let alone at MacDonald’s McCafé, Tim Hortons or anywhere else. The same goes for cars. While the mainstream segment doesn’t need to go as far as Tesla that fits a touchscreen inside its Model S worthy enough of inviting friends over to watch the Grey Cup, the remedial screen perched atop the centre stack of the first six Santa Fe trim levels doesn’t measure up, but that’s the only area where the Santa Fe falls short.

These are a ultra-useful for stowing valuables, especially if you’re away on a road trip and don’t have anywhere else to hide things, while there’s no shortage of luggage space above with 1,003 litres (35.4 cubic feet) of volume behind those super-flexible rear seatbacks or 2,025 litres (71.5 cubic feet) available when they’re folded down.

If that trip includes towing a trailer you can upgrade your Santa Fe Sport to include trailer brakes that allow its standard 750-kilo (1,653-lb) tow rating an upgrade to 1,270 kg (2,800 lbs). Those who need to tow bigger loads can also opt for the Santa Fe XL that can manage up to 2,268-kg (5,000-lb) loads, not to mention more cargo capacity, but that’s another review for another time.

Either way the Santa Fe is wonderfully comfortable front and back, with excellent head, shoulder, hip and legroom. My tester’s rear seat heaters are a particularly nice upgrade for smaller folks in the family that always feel like their missing out, as are the B-pillar mounted HVAC vents.

Even when completely loaded up with family and gear the Santa Fe Sport 2.0T delivers strong performance off the line, its twin-scroll turbocharged, 16-valve, DOHC, direct-injection 2.0-litre with dual-continual variable valve timing capable of 265 horsepower and 269 lb-ft of torque, my tester’s standard all-wheel drive fed through a six-speed automatic transmission with Hyundai’s Shiftronic manual mode holding gears when pushing it through corners.

If driven more moderately the Santa Fe Sport 2.0T is capable of achieving a very thrifty 12.9 L/100km city, 9.7 highway and 11.5 combined, which isn’t quite as good as the 190 horsepower base 2.4-litre engine’s 11.7 city, 8.7 highway and 10.3 combined with FWD or 12.5, 9.3 and 11.1 with AWD, but it’s great compared to V6-powered SUVs with similar output. This is just another area where Hyundai has a lead over its Japanese rivals, as they all require a move up to big thirsty V6 engines to exact the same level of performance.

Speaking of fuel-efficiency, the Santa Fe’s AWD system sends 100 percent of engine torque to the front wheels to save fuel unless wheel slippage occurs, at which point up to 50 percent is automatically allocated to the wheels in the rear. A driver-selectable AWD lock button designates a pre-set torque-split when encountering extremely slippery situations or tackling the wild, something the Santa Fe is quite capable of as long as you don’t wander too far into Hummer territory. Back on the road, the Santa Fe’s AWD system is a class above some competitors due to Active Cornering Control (ACC), a technology that automatically redirects power to the wheels with the most traction, while a torque-vectoring effect occurs as the system automatically adds brake pressure to the inside rear wheel while simultaneously adding torque to the outside rear wheel, a process that reduces understeer and improves overall handling and feel.

Another Santa Fe bonus is Driver Selectable Steering, a feature that offers up three distinct operating modes including Comfort, Normal and Sport, with the latter being my personal preference. Together with the SUV’s fully independent suspension that includes a MacPherson strut/multi-link and stabilizer bar setup front and back, it always felt totally connected to the road while amply comfortable over rough pavement. Braking is good too, the Santa Fe coming standard with ABS-enhanced four-wheel discs incorporating electronic brake-force distribution and emergency brake assist, while the safety suite also includes traction and stability control, vehicle stability management, downhill brake control, hill start assist, tire pressure monitoring, plus seven total airbags including a driver’s knee blocker.

Everything I’ve mentioned is fully backed by a comprehensive warranty that’s good for five years or 100,000 kilometers, which as you’ll likely know is two years longer than most automakers offer for their basic warranties.

What’s not to like? I’ve already noted the only negative I can find, something I’m quite certain Hyundai will rectify with the upcoming fourth-generation Santa Fe replacement expected sometime next year, but if you really must have big screen centre stack graphics and can’t wait until 2017 I recommend stepping up to a 2016 Santa Fe Sport 2.0T Limited right now. Then again, my 2.0T SE trimmed tester was wonderful in every other respect, every Santa Fe being totally worthy of the model’s unrivaled sales success. Do yourself a favour and listen to the audience when you’re ready to buy a mid-size CUV or trade in the one you already have. With respect to the Santa Fe they’re spot on.
©(Copyright Canadian Auto Press)
Car Shopping Tools