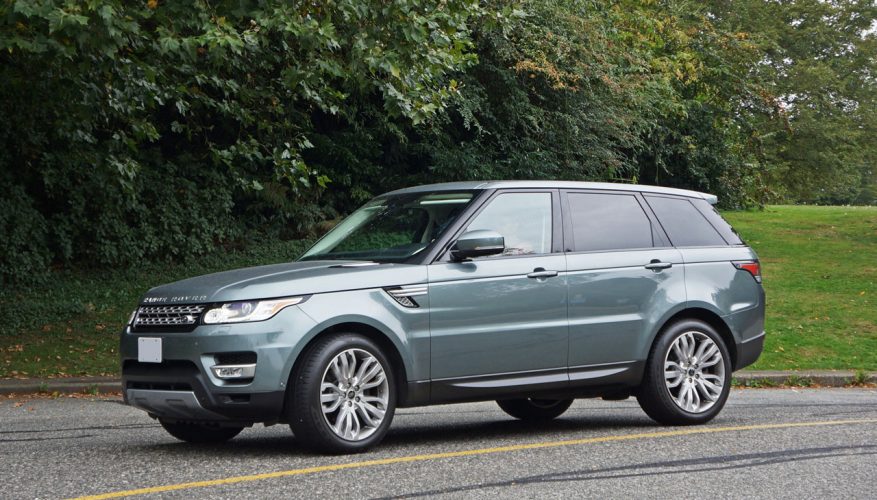 By: Trevor Hofmann
The folks at BMW must be kicking themselves right now. Way back in 1995 when then BMW CEO Bernd Pischetsrieder was named “Man of the Year” by Automobile Industries because of the $1.3-billion deal he struck to acquire Rover Group a year earlier, netting the Munich-based company a variety of British brands including Mini, Rolls-Royce and Land Rover/Range Rover, they purposely let the jewel of the bunch slip out of their hands in the spring of 2000 when they sold the SUV-maker to Ford, although the sale price of 3bn euros looked pretty good at the time. Now, with Ford out of the picture and Indian automaker Tata at the helm, Land Rover and its even more upscale Range Rover marque are doing very well.

Interestingly, BMW’s highly successful X5 was the inspiration for the original Range Rover Sport back in 2005 (no doubt the success of M-B’s AMG-trimmed M-Class and Porsche’s Cayenne helped Land Rover see the potential of a sportier Range Rover too), and while that first-generation Sport has been criticized for being too heavy and concurrently ultra-thirsty it sold very well, paving the way for this all-new much lighter aluminum-intensive Range Rover Sport.

By adopting a much sleeker, more aerodynamic and better looking aluminum body structure and panels, plus additional aluminum components the new Sport is some 340+kilos (750 pounds) lighter than its predecessor, a reality that makes it feel much more athletic than the old model even when powered by its new V6. Granted, it’s not just any V6, but rather a supercharge mill producing a very satisfying 340 horsepower and 332 lb-ft of torque, ample to make this midsize SUV feel like a lithe sport sedan off the line. OK, its 7.2-second launch from standstill to 100 km/h is more inline with entry-level sport sedans, but you get my drift. This is the base engine after all, available with the SE model and my HSE trimmed tester, whereas the oddly named Supercharged (both engines are supercharged so they might have thought to rename the entry-level V8 model) and Autobiography trims use a 510 horsepower V8, while the top-line SVR ups the ante to 550 horsepower in order to more effectively do battle against Porsche’s Cayenne Turbo et al. The heavier V8 engine makes the Sport about 290 kilos lighter than the model it replaces, still a substantive performance gain verified by its ¬5.3-second sprint to 100km/h – the SVR hits 100 in a mere 4.7 seconds.

While straight-line acceleration is plenty of fun and the V6 growls like a Jaguar under full throttle, the new lightweight Sport really had me hooked after my first jaunt through a favourite stretch of narrow, twisting, two-lane labyrinthine roadway where it performed better than a host of so-called sports sedans put to the same test. Instead of the opulently fitted midsize 4×4-capable SUV that it is, the Sport felt more like a well-sorted compact utility. It’s ultimately agile and shockingly quick on his feet, while its ZF-sourced eight-speed automatic shifts so quickly it could easily pass for an automated double-clutch gearbox, but then again it’s so smooth during regular use that it couldn’t be anything but a regular torque-converted automatic. I had some recurring trouble getting it from drive into reverse, a similar problem I’ve experienced with the same gearbox used by other brands, requiring some getting used to along with very positive engagement of the shift lever, but once on the road it was flawless. Oddly however, DIY shifting duties with any Sport below the $124,990 SRV require you to remove a hand from the steering wheel and place it on the console-mounted shift lever as there are no paddles included, a truly bizarre omission that should be standard even on the $74,490 base SE model, let alone the $79,990 HSE I spent a week with. That you can drop almost $105-large on an Autobiography Dynamic trimmed Sport and still have to go back to the ’90s to manually shift gears leaves me speechless, so enough said.

Fortunately the rest of my Sport HSE left me feeling speechless too, but in a positive way. Land Rover dropped a shock and awe campaign on its interior, extracting the less appealing plastics from the cabin and replacing it with expected soft surfaces made up of high-quality synthetics, leathers and the like. The leather chosen for my test vehicle was a light cream colour and perforated for the seat inserts, while gorgeous chunks of hardwood and seemingly solid billet aluminum graced the dash, door panels and centre console, but in a decidedly understated fashion compared to Range Rovers past. I like the cleaner approach to design a lot, the money spent to upgrade targeting quality not quantity of features, although this model wasn’t short on top-tier hardware or software.

I was a bit miffed that you needed to move up to the HSE model to get an auto-dimming rearview mirror, something mid-grade Hyundais offer, or for that matter LED front map lights, a universal remote garage door opener, satellite radio, and aluminum doorsill tread plates with Range Rover lettering – you’d think they’d want to advertise that last point across the range – but the fixed panoramic sunroof with powered sunshades was an unexpected standard SE feature, as was its standard proximity-sensing keyless entry with pushbutton ignition, electric parking brake, heated windshield with heated washer jets, front parking sonar with forward camera view, and HID headlights with LED signature DRLs. The HSE adds a powered slider to the panoramic sunroof, the upgraded perforated leather that I mentioned before, an acoustic laminated windshield and larger 20-inch rims.

Plenty of additional upgrades can be had too, such as a $950 SE Premium Package that adds a garage door opener, front fog lamps, high beam assist and adaptive headlights; a $1,300 Premium Package for the HSE that includes the items not already standard from the SE’s Premium Package plus 16-way powered front seats with forced ventilation and a cooled front centre storage bin; a $2,100 Convenience Package for both SE and HSE models that adds a surround camera system, park assist, and a soft door close feature; a $1,200 Driver Technology Package for SE and HSE trims that includes lane departure warning with traffic sign recognition (that’s a cool feature), blind spot monitoring with closing vehicle sensing and reverse traffic detection; but that package first requires you to upgrade to the Premium or Luxury Package, the former already covered and the latter, which is priced at $2,950 and only available with the HSE, grouping together some items already offered in previously mentioned packages and including three new features, the new items being four-zone automatic climate control, mood lighting that’s customer configurable, and ventilated rear outboard seats to go along with this package’s ventilated front seats, while the Luxury Package also includes the aforementioned 16-way powered front seats, cooled front centre console bin, high beam assist, and adaptive headlights. A number of additional packages mix and match features, allow for an extra row of seats, upgrade the Sport for towing and add the ability for serious off-roading.

Yes, you heard me right. Both SE and HSE trims come standard without a true off-road drivetrain, a single-speed transfer case without low-range crawling capability making the Sport’s pavement-focused mission clear. Both trims come with Land Rover’s superb Terrain Response system, mind you, and either can be had with a very reasonably priced $1,300 Extra Duty Package that adds Land Rover’s Terrain Response 2 along with the twin-speed transfer box including its low-range gearset, plus an adaptive dynamics system that lets you raise or lower the suspension for off-road or highway and loading levels respectively. My HSE tester was so equipped, and while I didn’t go on any serious 4×4 adventures during my test week I certainly played around with the system and found it ultimately easy to use. Past experience with Land Rovers and Range Rovers alike have proven to me that the brand knows a thing or two about off-roading (understatement of the century), one of which was an especially eye-opening and truly memorable experience held at the Land Rover Experience Driving School located in Montebello, Quebec.

The more on-road focused V6-powered Sports not featuring the Extra Duty Package are nevertheless ideal for most peoples’ needs, whether that be hitting the slopes (preferable on your skis and not specifically with the Sport) or light-duty trails. Additionally, they’re excellent for towing due to standard electrical preparation and Trailer Stability Control (TSC), making the V6-powered Sport good for up to 3,500 kilos (7,716 lbs) of trailer weight. No doubt it would look mighty fine with a SeaRay Sundancer 260 hooked up to the back.

With either boat or camp trailer in tow, you should feel at ease due to the Sport’s confidence inspiring control of the road, plus its bevy of active safety gear such as Four Corner Air Suspension (FCAS) that automatically levels the SUV with the road surface, Gradient Acceleration Control, Hill Descent Control, Roll Stability Control, Dynamic Stability Control, Cornering Brake Control, and the usual tire pressure monitoring, electronic traction control plus ABS-enhanced four-wheel discs with electronic brake-force distribution and emergency brake assist, not to mention a full assortment of airbags.

The Sport also comes standard with an automatic start-stop system that will shut off the engine when it would otherwise be idling, joining its lighter overall weight, more efficient V6 engine and other enhancements that all help it garner much better fuel economy numbers than its predecessor. Keep in mind that our government wisely killed off its hopelessly out-to-lunch two-cycle testing protocol after the 2014 model year, instead replacing it with a more accurate five-cycle system for 2015, so the V6-powered Sport’s claimed rating of 14.0 L/100km city, 10.5 highway and 12.4 combined would have looked much more appealing, albeit completely false, last year. These numbers are quite a bit more efficient than some similarly powered competitive SUVs, although not as good as rivals that compete with diesels, an issue that Land Rover will soon remedy by offering its superb 3.0-litre Td6 turbocharged clean diesel V6 in the 2016 Range Rover Sport and top-line Range Rover. Land Rover claims a staggering 32-percent advantage over the supercharged V6 I tested here, but this move isn’t only good for fuel economy. With its 440 lb-ft of tree stump unrooting torque the diesel will also rub salt in the base supercharged V6 model’s wound by reducing the Sport’s zero to 100km/h time to 6.9 seconds, not a lot but bragging rights just the same. It will likely increase the Sport’s tow rating too.

Practicality in mind the Range Rover Sport is quite accommodating inside. It won’t steal sales from the larger LR4’s more family friendly layout, but the Sport’s cabin feels airy, front and rear seats spacious and available third row useful when little Aiden wants you to bring his buds Jacob and Ethan along to the rink. Or we better make that the park, because there’s little space for hockey bags behind that third row, so badminton rackets and shuttlecocks will have to do. Land Rover doesn’t even mention the three-row Sport’s rearmost cargo dimensions on their site, but they do point out that there’s 874 litres (27.7 cubic feet) of luggage space behind the second row and even spell out that there’s only offering 489 litres (17.3 cubic feet) available under the tonneau cover (an unusual but appreciated bit of clarity), while folding the Sport’s wonderfully flexible 40/20/40 rear seatbacks flat opens the SUV up to a maximum of 1,761 litres (62.2 cubic feet) of gear hauling capacity.

No matter the seating configuration, engine choice or trim level, the Range Rover Sport will remain one of the most sought after vehicles in Land Rover’s ever-burgeoning model lineup. It likely won’t sell as well as the upcoming Discovery Sport due to that model’s $41,000 entry-level price point, but other than the top-tier Range Rover, the Sport is the most prestigious SUV in Land Rover’s five-model portfolio and since its update last year is truly deserving of its high-ranking position both within the Range Rover brand and amongst competitive luxury SUVs. And the kicker? BMW still doesn’t offer anything that comes close.
©(Copyright Canadian Auto Press)
Car Shopping Tools