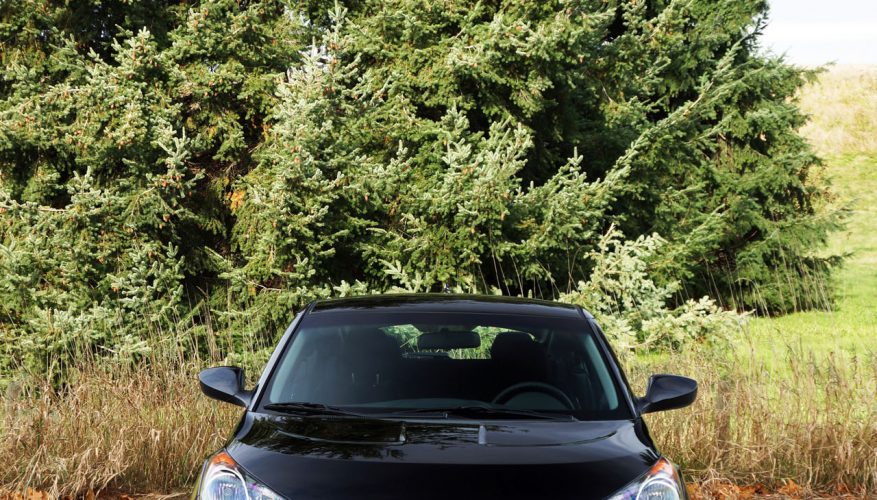 By: Trevor Hofmann
Up and comers take more chances. Everyone knows that. If you’ve got more to lose then you play it safe, or at least that seems to be the way of the world. Still, nobody can call Hyundai a wannabe mainstream player anymore. They’re way too successful than that, and therefore it came as a bit of a surprise when they introduced the unorthodox Veloster sport coupe a few years ago.

I say unorthodox because of its unique styling and even more unusual body configuration, which shows the sleek sportiness of a two-door on the driver’s side and the practical aspects of a four-door on the passengers’ side. In reality it’s a three-door coupe, or if you factor in the rear hatch a four-door.

No matter how you classify it the Veloster is cool. It looks like a bulldog charging after a scurrying cat, but rather than tear its prey to pieces it’s more likely to lick it to death, or at least that’s the feeling it gives off to me. Hyundai seems to have answered the question “What do you get when you cross a Mini Cooper Clubman with a second-gen Honda CRX?” or something along those lines. What they got was a very practical little performance coupe that has become quite popular in sport compact circles.

To give you an idea of just how popular it is, the Veloster outsells the Mini Cooper line (which includes everything but the Countryman and Paceman models), as well as both the Scion tC and FR-S, Nissan’s Juke (I know it’s more of a crossover but it targets a similar sporty compact buyer), and Volkswagen’s Beetle. VW’s GTI sales are much stronger, but it’s had a four-decade head start so give the Veloster a little time to catch up, and Honda doesn’t differentiate between regular Civic sales and the sportier Si that more directly targets the speedy Hyundai, so these numbers weren’t available. Either way, the Veloster has struck a chord with sport compact buyers.

It deserves its ardent following. I mentioned the Cooper Clubman earlier because both cars include a second door on the passenger’s side, a unique feature that hasn’t been used very often (particularly bad memories of an early 2000-era Saturn SC2 Coupe come to mind, and while a nasty bit of mechanical engineering its extra passenger door functioned well enough other than opening on the driver’s side which made it less useful). My reference to the second-generation CRX relates to its high-backed design and tiny rear window slotted into its backside, similar in execution to the Veloster.

While the rear window offers an interesting element to this Hyundai’s overall design, its practical application is improved rearward visibility. This said, even with standard rear parking sonar and my SE tester’s reverse camera the Veloster isn’t ideal if you regularly have trouble backing up, as its low riding position and minimal greenhouse thanks to thick C-pillars don’t make for a particularly commanding view of the road. But of course that was never the design teams intention and wouldn’t have resulted in anything close to the Veloster’s performance-first feel.

Slip into the nicely bolstered sport seats, grab hold of the meaty three-spoke steering wheel and stare ahead to the motorcycle-style twinned-circle gauge package and you’ll be thinking about hitting the track or at least a circuitous ribbon of backcountry tarmac instead of just the mundanities of day-to-day traffic. It managed the latter well enough, but it’s the bomb on the open road with nice sharp turn-in and excellent stability no matter the situation. My Veloster didn’t include the turbo that ups output to 201 horsepower and 195 lb-ft of torque, instead its 16-valve, DOHC, direction injection 1.6-litre four-cylinder is near identical yet naturally aspirated for a total of 138 horsepower and 123 lb-ft of torque, and while these numbers aren’t what you might expect of a car that looks as audacious as the Veloster, the engine loves to rev all day long and the DCT gearbox it’s mated to is about as quick-shifting as anything in the industry.

I remember the days when such dual-clutch automated manuals were the stuff of Ferrari and BMW’s M cars, not volume players like Hyundai, but now a number of carmakers have spent the money to integrate this high level of sophistication into their lower level models in an effort to deliver the best possible fuel economy without sacrificing performance. Hyundai’s DCT does just that, which is why it’s full name is EcoShift DCT. Replete with a set of paddles behind the steering wheel spokes, the Veloster becomes a little racer when right foot hits floorboard, the flick of the right hands’ fingers resulting in blisteringly quick shifts of its six forward speeds and left hand doing likewise producing equally speedy downshifts, thus allowing the little engine to stay on power within its ideal rev range, or what performance enthusiasts like to call its “sweet spot”.

As fun as driving like this can be, more moderate speeds result in an impressive fuel economy rating of 7.4 L/100km in the city, 5.5 on the highway and 6.5 combined, although keep in mind these numbers will change for the 2015 model due to Transport Canada’s much more realistic five-cycle testing process. The exact same model with slightly differing trims is available for 2015, and the new fuel economy rating is in at 8.6 city, 6.6 highway and 7.7 combined, which is still an enviable result for a sport coupe. Fuel economy is aided by a standard Active Eco system in this DCT and lesser automatic-equipped models, while those fitted out with the six-speed manual get an Ecoshift Indicator.

All of this thrifty performance comes wrapped up in one of the nicest interiors in the sport compact segment. I mentioned the great looking gauges, but didn’t go into detail. They’re surrounded in satin silver binnacles, while the same satin silver highlights many of the cabin’s other surfaces such as the HVAC vent surrounds, the spines on either side of the lower console, the panels surrounding the door handles, as well as the door pulls. Additional detailing includes piano black lacquered plastic subtly applied to an inner ring of the centralized HVAC controller knob, mirrored by a similar ring surrounding the centrally-mounted ignition button, and just below that as an embellishment to the shifter knob and gear selector panel. I like this minimized use of the trendy material better than some manufacturers that swathe it all over the place, as it’s a magnet for dust and dirt and has been know to scratch easily. Rather, most of the larger surfaces inside my Veloster tester were constructed of nice looking matte grey plastic that wears well and doesn’t need constant cleaning. Also spoken of earlier were the nicely bolstered sport seats, which looked purposefully plush in high quality mesh fabric with attractive light grey stitching. The grippy material ideally held backside in place while snaking through the corners, while their good lower back support is always welcome.

A full array of steering wheel controls include audio, phone, voice recognition, cruise and multi-information display/trip computer access, while at dash-central my tester boasted a nice large infotainment touchscreen with integrated radio controls and a reverse camera system, but no navigation.

To get nav you need to step up from my SE model to Tech trim, at which point your Veloster will also be equipped with an upgraded 460-watt Dimension audio system with two additional stereo speakers and a subwoofer, plus a household-style 115-volt power outlet, and other less tech-oriented but still appreciated items such as a heated leather-wrapped steering wheel, leather-wrapped shift knob, leatherette seat bolsters, padded leatherette door inserts and armrests, more high-gloss black interior accents, powered lumbar support for the driver’s seat, alloy foot pedals, a powered tilt and slide panoramic sunroof, automatic projector-style headlights, LED taillights, turn signals integrated into the mirror housings, and slightly larger 18-inch alloys on 215/40R18s.

My SE tester rode on the stock satin silver finish five-spoke 17-inch rims wrapped around 215/45R17 Nexen rubber, which as mentioned was totally up to the task of adhering to each and every road surface I threw the Veloster at, as well as providing a comfortable ride, while additional SE features include proximity sensing access with pushbutton ignition, heated front seats, cruise control, satellite radio and a rearview camera system integrated into the car’s standard seven-inch touchscreen infotainment display.

That’s a nice large full-colour display for a stock system, while the rest of the base Veloster’s goodies were made up a mix of unexpected and class-norm items such as six-speaker AM/FM/CD/MP3 audio with speed-sensitive volume, aux, USB, iPod/iPhone, and even RCA wired connectivity as well as Bluetooth hands-free, plus manual HVAC with air conditioning, heated power side mirrors, tilt and telescoping steering, a six-way adjustable driver’s seat and four-way front passenger seat, variable intermittent wipers, fog lights, remote keyless entry, a handy overhead sunglass holder, rear cupholders in the centre storage tray, and 60/40-split rear seatbacks opening the 440-litre cargo area up to a maximum of 982 litres.

Practicalities in mind, all Velosters are equipped with six airbags, traction and stability control along with Vehicle Stability Management, ABS-enhanced four-wheel disc brakes with emergency brake assist, and as previously mentioned, rear parking sonar. That’s a lot of standard gear for a car that starts at a mere $19,849 plus $1,695 for freight and pre-delivery prep, and in non-Turbo guise tops out at just over $25k. My EcoShift DCT tester was priced at $21,249 before an automatic no-haggle price adjustment of $3,000 (the 2015s are arriving as I write these words), which seems low for a car as nicely kitted out and as wonderfully expressive as it was.

I love how Hyundai has balanced a totally unique approach to design and zippy, poised performance with real-world pragmatism for a very complete compact sport coupe. This isn’t a car for boring people, but rather a Veloster is ideal for those who don’t mind attracting a little attention as they roll up to the club. Its unique shape and fine attention to detail, such as the chrome strikethrough on the grille, jeweled headlights and chrome-trimmed fogs, radically chopped roofline, high-mounted taillights and über-kool twin rectangular tailpipes set within the centre of the rear valance add a level of style that completely sets the Veloster apart. It’s unusually brilliant. A bit of automotive Antoni Gaudí in a Peter Keating world. It appears that enough people appreciate a car company willing to take chances, and the result has been a very successful automotive oddity.