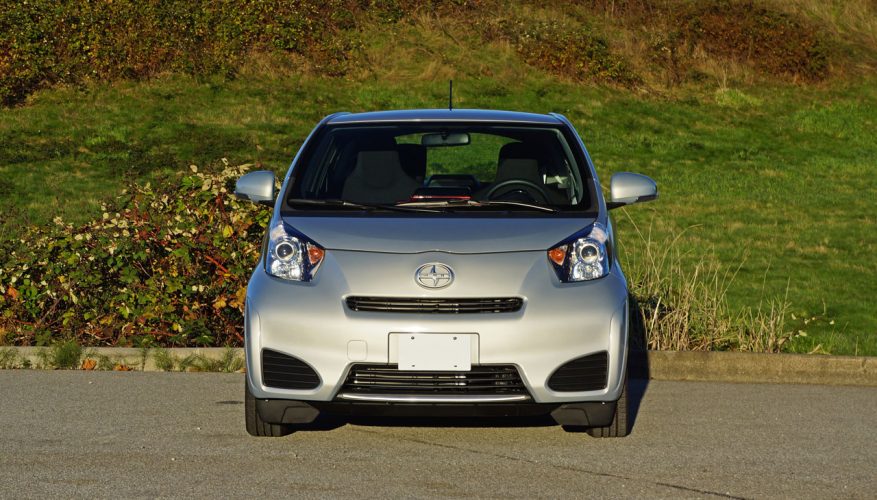 By: Trevor Hofmann
Just why Scion’s funky little iQ doesn’t outsell the Smart Fortwo ten-to-one is anyone’s guess. It is tiny yet seats three comfortably and four in a squeeze whereas the Smart is only good for two. It drives much better on the highway and through curves, remaining stable and go-kart-like compared to the Fortwo’s less confidence-inspiring weeble impression. It delivers stronger straight-line performance with 24 more horsepower on tap and 21 additional lb-ft of torque, despite getting better combined fuel economy at a claimed 5.5 city and 4.7 highway compared to the Fortwo’s 5.8 city and 4.7 highway rating. And it’s priced more than a thousand less at $17,090 plus $1,495 freight, yet the Smart still outsold the iQ more than two-to-one in the U.S. last year and more than four-to-one in Canada. What gives?

It would be easy to say that the iQ is just one more example of buyers not always thinking with their heads (which would be ironic considering the car’s name), but I’m guessing few people in this market even know it exists. Smart did well to capture peoples’ imaginations along with market share many years ago, and the iQ is a comparative newcomer that, in Canada at least, is sold by a relatively unknown sub-brand out of select Toyota dealerships. It’s quite possible that if Toyota replaced the Scion badge with its stylized “T” and then offered a stripped down version with a cheaper manual transmission it would fly off showroom floors.

As it is the iQ gets an ultra-efficient continuously variable transmission as standard equipment along with Scion’s one-trim fits all strategy, and a $17k-plus price tag to go along with all of its standard kit. And yes, the little car comes fitted out with an impressive array of standard goodies including remote keyless entry, powered windows with one-touch auto up/down, power-adjustable heated side mirrors with integrated turn signals, a leather-wrapped three-spoke steering wheel with tilt, air conditioning, intermittent wipers, great sounding AM/FM/CD/MP3/WMA-compatible six-speaker audio with aux and USB inputs, Auto Sound Levelizer (ASL), and Bluetooth, plus rear seat heater ducts, colour-keyed bumpers, door handles and mirror caps, 16-inch wheels on 175/60R16 all-season tires, and loads of safety equipment including ABS-enhanced brakes with electronic brake force distribution and emergency brake assist, stability and traction control, Smart Stop Technology (SST) that cuts power to the engine when panic braking, and a full assortment of airbags totaling 11, including one apiece for the driver and front passenger’s knees and an industry-first rear window curtain airbag, protecting the heads of rear passengers during a rear-ender.

MVAs in mind, the iQ was engineered with a particularly strong body structure designed to absorb and dissipate impacts rather than transmit outward forces into the passenger compartment. Case in point, the US National Highway Traffic Safety Administration gave the Scion four out of five stars for overall crash protection and three out of five for side impacts. Even better, the Insurance Institute for Highway Safety endowed it with a “Good” rating (which is as “good” as it gets) for both offset frontal crashes and roof strength. So it might be small, but it’s certainly safe.

The iQ’s secure cabin is also brilliantly executed, with soft touch surfaces in front of the passenger on the dash and on the door uppers, plus armrests that are comfortably padded. Really there’s so much nice detailing in this car that I don’t know where to start. All the wonderfully bazaar organically curved surfaces, such as the door handles, instrument binnacle, and the centre stack make you feel like you’re driving a rolling piece of modern art, but that’s not to say it’s all form and no function. The standard leather-wrapped steering wheel, dressed up with red stitching on my tester, is thick and meaty with ideally shaped spats for the thumbs. An impressive display audio system sits on top of that uniquely shaped centre stack I just mentioned, and below that a three-dial HVAC system works effectively and looks fabulous in its unorthodox vertical design. Just below, a cool electric blue and chrome-enhanced leather-wrapped gearshift knob caused me to think of Toyota’s Prius hybrid, and I suppose this car’s aforementioned fuel efficiency makes it green enough to qualify in this group.

Ergonomics are great, with all controls falling easily into hand, while the front seats are big and comfortable. The rears are pretty small though, but are certainly better than no seats at all. The one behind the driver offers more legroom, easily accommodating my five-foot-eight frame, while the seat behind the driver works for short stints or a longer haul with a small adult or child strapped in. I’m going to guess most will leave them folded flat more often than not, as luggage space in behind the seatbacks is tight when they’re upright, measuring just 168 litres (5.9 cubic feet). Fold the 50/50-split seatbacks flat, however, and there’s a lot more available room for your gear, with maximum luggage capacity expanding to 472 litres (16.7 cubic feet) or about the size of a large sedan’s trunk.

One of the reasons the iQ can carry so much is its upright rear hatch design, a look that makes it seem as if half of it is missing. This is common in the pint-sized city car class, the Fortwo appearing chopped in half too, and in this respect the iQ is much better proportioned than its French-built competitor. The iQ really commands attention, and it doesn’t hurt that Scion’s fitted it out with premium details like jeweled headlamp and taillight clusters plus those turn signals integrated into the body-color mirror housings.  My tester featured a set of 175/60R16 Goodyear Assurance tires wrapped around cool graphite finished twinned eight-spoke alloys, which came as part of the Limited Edition 10 Series upgrade my particular car benefited from.

This package, named 10 Series for Scion’s 10th anniversary in the U.S., also includes a solar-powered illuminated shift knob, silver seat belts, the Scion name illuminated on the dash before fading to reveal the number 10, a sequentially-numbered interior plaque, LED-illuminated exterior badges that light up when the driver unlocks the car, and special “Silver Ignition” paint. Astute readers might notice there’s an issue with my math, Scion having been born in the U.S. market in 2003 and this model being dubbed a 2014 by yours truly, and while it was built in late 2013 and therefore could have been a 2014 it’s actually a 2013 model year car. What matters is that this example is still brand new and available from Scion, and the iQ hasn’t changed one iota since it arrived here in 2011 as a 2012 model. From what I’ve been told there aren’t any changes for model year 2015 either, so I’ll follow this review up soon and once again complain that Scion should be offering a less expensive version with a six-speed manual.

While a manual would no doubt sport up the iQ further, I’m guessing this 10 Series special edition’s lighter rims help the car feel a little better through the corners than the stock steel rims, but even the base car is very agile. On the iQ’s original launch trip way back in 2011 I took the tiny tot through a rally cross course and it performed extremely well, making the Smart car feel like a shopping cart and even leaving the Fiat 500 a bit limp, as the Scion remained flatter and more stable while hard-charging through tight corners. Likewise braking is very good, and as mentioned at the beginning of this review, the iQ’s more powerful engine makes a sizable difference. It’s a 1.3-litre four-cylinder, smoother and more refined than any three-cylinder engine, capable of 96 horsepower and 89 lb-ft of torque, which is a lot for a 965-kilo (2,127-lb) vehicle, while its Tier 2 Bin 5 emissions rating and Ultra Low Emissions Vehicle (ULEV II) status adds a much-appreciated feel good factor.

The entire car made me feel good actually. From its impishly expressive styling, beautifully finished interior and full feature-set to its fun performance and outrageously good fuel economy, the iQ is a complete four-seat car shrunk down to inner-city size. It’s easy to drive, easy to park and easy to live with, the ideal car for urbanites. It truly deserves more attention and Smart car buyers certainly deserve a car as good as the iQ.