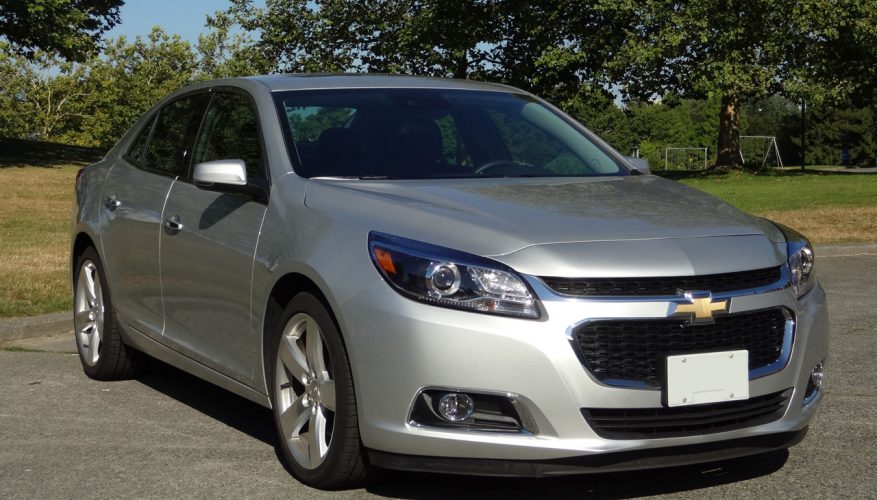 By: Simon Hill
Given that the eighth-generation Chevrolet Malibu was only just launched in 2013 as an all-new model, one might have expected that it would enter 2014 relatively unchanged. Instead, faced with softer-than-forecast sales, Chevrolet’s mid-size family sedan was trotted back to the design studio to get a bit of a refresh for its sophomore year.

It’s not that the new Malibu hit the market with any significant faults, mind you: It’s a thoroughly competent machine, based on Chevrolet’s Epsilon II platform and sold as a global car across six continents and over 100 countries. In my review of the 2013 Malibu Eco I called it "conservative, yet handsome and capable looking," and I was impressed with the interior and the infotainment system. The problem is that the Malibu sells in a crowded and extremely competitive market, and being conservative and capable wasn’t getting it noticed. So for 2014 Chevrolet set out to fix that.

The changes include a new front fascia with a wider upper grille and a larger, more aggressive lower grille. Stylistically it’s a definite improvement, eliminating the slightly bulbous look of the initial design and giving it a nice familial resemblance to the Impala, with just a touch of "don’t mess with me" menace. Unfortunately for those who live in jurisdictions that still mandate front license plates, the new look doesn’t integrate the plate as well as before (it juts up above the lower grille), but the overall look is better regardless.

Inside, the front seatbacks are now scooped out to provide improved rear legroom, and the centre console was reworked to provide dedicated smartphone cubbies for both driver and passenger, with more intuitively place cupholders to help prevent getting each other’s drinks mixed up (apparently Chevrolet determined that the risk of accidentally getting a sip of your spouse’s root beer instead of your own cola was enough to put off some buyers). The colour schemes have also been tweaked in the name of refinement, with a new dark faux woodgrain trim added in my test car.

I drove the 2014 Malibu late in the annual product cycle, with the 2015 Malibu already getting ready for sale, but there will be little change for the 2015s: some colour changes, some new alloy wheel designs, and the loss of the electrically-operated child door locks featured in the 2014 (the newer Malibu will revert to manual security child locks). Perhaps the most significant change will be the introduction of Gen 10 OnStar with 4G and Wi-Fi hotspot, so if that’s important to you, you might want to consider waiting for a 2015, but otherwise the 2014 has it all.

Under the hood the 2014 Malibu comes with a choice of two engines: a base 2.5-litre four cylinder that develops 196 horsepower and 186 lb-ft of torque while featuring auto stop/start technology to reduce idling and improve city fuel efficiency, or my test car’s 2.0-litre turbocharged four-cylinder, which cranks out 259 horsepower and 295 lb-ft of torque. The mild-hybrid Eco version I drove in 2013 is no longer available, partly due to the improved economy of the base engine (8.0 / 5.3 L/100km in city/hwy driving), which pretty much matches what the Eco was able to achieve. The more powerful Turbo is rated at 10.1 / 6.6 L/100km (city/hwy). Both engines come mated to a smooth-shifting six-speed automatic transmission, and there’s a manual mode for when you want to take over control (although I find Chevrolet’s gear knob-mounted shift button fiddly and difficult to use, and the Malibu isn’t shy about denying shifts it doesn’t like).

On the road, the turbocharged Malibu LTZ is reasonably quick without being excessive. The run from 0-100 km/h takes about 6.5 seconds versus about 8.0 seconds for the base 2.5-litre car. A fully independent suspension (with MacPherson struts up front and a four-link setup in the back) allows a smooth, unfussy ride and competent handling, and the brakes are more than up to the task for everyday driving. The steering is reasonably quick, although the electric assist is a little overboosted, leaving the wheel feeling a bit vague at times. For 2014, updated sway bars reduce the amount of body roll in corners.

Inside, Chevrolet does a good job of creating a thoroughly livable, comfortable environment. I particularly like the hidden ambient lighting that reflects off the chrome strips across the dash, and the nifty hidden storage bin behind the touchscreen. The storage doesn’t end there, with lots of other useful storage cubbies scattered throughout the cabin.

Soft-touch materials are deployed on the dash top (which is nicely stitched around binnacle) and both the front and rear door uppers. Cloth upholstery is standard, with leather upholstery available in 2LT and 3LT trim, and included with my test car’s LTZ trim. Up front the seats are accommodating and supportive, with plenty of room to stretch out. The back seat isn’t quite so roomy, but my six-foot-one teenage son fit without undue complaint, even if there wasn’t much room to spare. The trunk offers a commodious 462 litres of space that can be expanded thanks to the 60/40 split-folding rear seatbacks, and it has a nice big opening and covered hinges so you won’t be crushing your eggs when you go grocery shopping.

In terms of infotainment, Chevrolet’s MyLink continues to impress me with its rich set of features and intuitive interface. Bluetooth telephone connectivity is standard across the range, with satellite radio, a USB port and Bluetooth audio streaming also standard on all but the base LS model. My loaded LTZ came with a Pioneer premium sound system that included navigation and more features than I could reasonably discover in one short week.

Safety features in the LTZ include lane departure warning, cross-traffic alert, and forward collision warning, which when combined with the Malibu’s stout structure earned it an IIHS Top Safety Pick+ award.

Pricing for the 2014 Malibu ranges from $26,695 (including the $1,700 destination fee) for the base LS, up to $36,415 destination in for my loaded, turbocharged Malibu LTZ test car. Add it all up, and the Malibu remains a quietly impressive car, with its updated style giving it just a little more presence. It still faces a tough battle against a wide array of rivals including the Ford Fusion, Toyota Camry, Honda Accord, Hyundai Sonata, Mazda6, Nissan Altima and more, but if the mildly aggressive new look can tempt a few more folks into the showroom then Malibu’s well-rounded combination of features and value is likely to win at least some of them over.