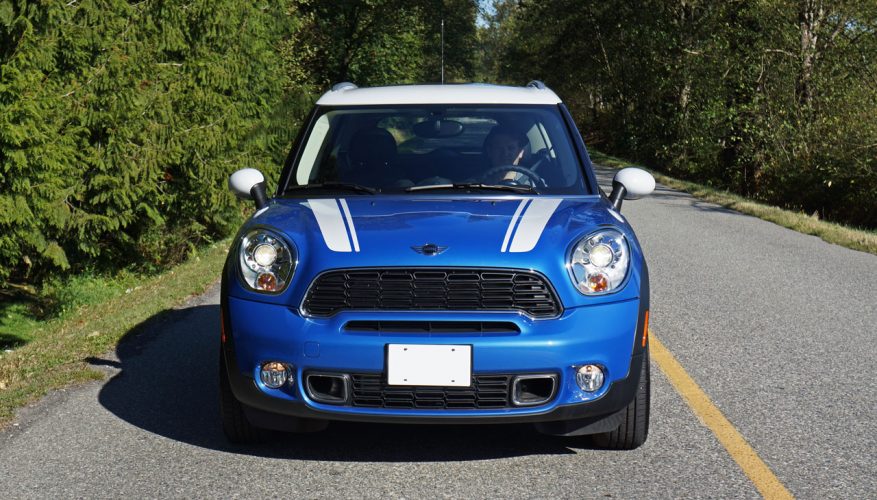 By: Trevor Hofmann
If you want to know what it’s like to drive Mini’s new Countryman crossover utility, contemplate this: Does your compact CUV have racing stripes?

Of course, racing stripes won’t make a car go faster, but in today’s market it takes a fair bit of gall to decal up your CUV’s hood with classic Monte Carlo Rally-bred #177 livery if it won’t go as well as it shows. As you might expect from Mini, the Countryman moves along quite nicely, especially in Cooper S ALL4 guise, as was the case for my very pretty True Blue Metallic tester.

Well, the colour was pretty; I wouldn’t call the car pretty. It’s more handsome, being that its big frowning grille looks a lot steelier than the brand’s cute and playful car lineup. The bigger crossover’s headlight clusters are larger and more ovoid than round, front spoiler deeper and more rugged looking, fenders a bit more muscular and made more attractive at their rearmost edge by a thick chrome engine vent/trim garnish slash, while at the very back a larger set of classic vertical taillights bookend a bigger winged Mini emblem that sits above bold chrome block letters spelling out “COUNTRYMAN” across the hatch. The rest of the Countryman is Mini XXL, not to mention the first four-door hatchback in the iconic British brand’s history.

Mini XXL is still quite small compared to other crossover SUVs on the market, mind you. It stretches 4,108 mm from nose to tail, which makes it the stubbiest CUV on the market, shorter even than Nissan’s quirky little Juke, Fiat’s oddball 500L, the badge-engineered Buick Encore / Chevy Trax, and Jeep’s new Fiat-based Renegade. Compared to a regular compact CUV like the Honda CR-V it’s impish, some 422 mm shorter, but that doesn’t mean it’s small on the inside. OK, if you’re downsizing from a CR-V you’ll need to repack your camping gear, but next to its true subcompact competitors its cargo hold, which measures 467 litres behind its ultra-convenient 40/20/40-split folding rear seatbacks, and 1,195 litres when those backrests are laid flat, sits around mid-pack.

Likewise its front and rear seating areas are roomy and comfortable, the rear capacious compared to the regular Cooper Hardtop. From the driver’s seat there’s little to differentiate the Countryman from others in the Mini lineup, at least if you’re not overly familiar with the many models offered by the British brand. Those familiar will immediately notice the Countryman’s much more convenient power window switches, located on the doors instead of on the centre stack, but the overall layout is pure Mini. This is a very good thing, as it means none of the Countryman’s mainstream competitors can compare with Mini’s cabin quality, let alone its classic retro interior design. Nice soft-touch plastics join up with excellent quality switchgear, much of which is done out in bright chrome, its chromed toggles bringing back especially fond memories of classics I’ve owned through the years. For a CUV that starts at only $25,500 plus $2,295 for freight and pre-delivery prep, the Countryman is a full premium experience in a handy little subcompact package.

It feels much more luxurious as you load it up, of course. My tester wasn’t short on options, including leather upholstered sport bucket seats, high-gloss black lacquered trim, dual-zone automatic climate control, brilliant sounding 480-watt 10-speaker Harmon/Kardon audio, satellite radio, automatic headlights, an auto-dimming rearview mirror, a panoramic glass sunroof, yet more chrome inside and out, and brilliantly clear and legible navigation integrated within the ultra-impressive Mini Connected infotainment system that itself is imbedded within the Countryman’s massive circular speedometer at dash-central, the needle of which spins around the outside of the infotainment display for some seriously eye-catching wow factor.

These last items come as part of the Countryman’s Wired Package, a few of the items before with the Style Package, the audio upgrade as part of the Sound Package, and the first extras mentioned included in the Premium Package. If you still want more, Mini offers the Cooper S Countryman with a JCW Package, featuring most of the styling, handling and additional upgrades of the more powerful JCW, except for the power, while adaptive HID headlamps can be had with the Lights Package, auto-dimming side mirrors with the Mirrors Package, and unique 18-inch alloys, sport suspension and energy inducing Sport button with the Sport Package (which incidentally all comes with the JCW Package).

There’s no shortage of standalone options either, a shortlist including proximity sensing Comfort Access to ease entry and exit, rear parking sonar to keep the bumper scratch free, an alarm system, an electric front window defroster, multiple wheel and tire choices, and the list goes on. The white stripes, white mirror caps and white painted roof on my tester are individual options too, as are the fog lamps, while roof rails are standard on all Countryman trims, not unusual in the crossover class.

If you want to add standard dynamic traction control you’ll need to move up to the $29,900 Cooper S, which as mentioned also includes standard ALL4 all-wheel drive to go along with a much more powerful engine. The cockpit surfacing is done out in a dark anthracite for a sportier look, while you now have the option of getting the same dark anthracite (black) roofliner and/or 18-inch twin-spoke black burnished light alloy wheels that come standard on the JCW. The Cooper S also comes standard with comfortable and supportive sport seats, plus a cool looking rear rooftop spoiler.

That the Cooper S Countryman comes with a standard six-speed manual gearbox says even more about its performance potential than the racing stripes I mentioned at the beginning of this review. My tester came equipped with a paddle-shift actuated six-speed automatic, a $1,300 option across the line. The base engine is Mini’s 1.6-litre inline four-cylinder, good for 121 horsepower and 114 lb-ft of torque. While adequate for most peoples’ needs, it’s not exactly going to get the blood boiling at takeoff, which is why I was happy for my loaner’s S configuration.

The Cooper S ALL4 Countryman incorporates a much more energetic direct-injected and twin-scroll turbocharged version of the same engine resulting in 181 horsepower and 177 lb-ft of torque, although it will make up to 192 lb-ft of torque on overboost. This turns yadda yadda yadda into yippee yay yeah! OK, it’s not as adrenaline inducing as the John Cooper Works (JCW) Countryman’s 208 horsepower and 192 lb-ft of torque (207 lb-ft on overboost), but hey, the S presents a significant cost savings over the pricier JCW, and as sales results show the mid-grade model is the ideal fit for most performance CUV drivers’ requirements. After all, can you really tell the difference between 7 seconds to 100km/h and 7.9? The auto-equipped Cooper S makes the 100-km/h interval in 8.2, but you get the gist of what I’m saying. Alternatively, most will be able to feel the difference between the Cooper S and the base model’s more casual 10.7- and 11.6-second lope to the same speed (for the manual and auto respectively). Top speeds of the S and JCW are both set to 205 km/h no matter the transmission choice, whereas the base Cooper tops out at 186 with the manual and 182 with the auto.

While this is interesting for those with gasoline running through their veins, normal folks will care a great deal more about fuel economy. This is where the Mini Countryman sparkles and shines, the Cooper S model I drove being good for a claimed 8.1 L/100km in the city, 6.4 on the highway and 7.3 combined with its six-speed manual gearbox, or 8.7 city, 6.5 highway and 7.7 combined with the six-speed automatic. Want better? The base model gets an even more miserly rating of 7.4 city, 5.7 highway and 6.6 combined with the manual, or 8.1, 6.6 and 7.4 with the autobox.

Of course, drive the Countryman like I did and you’re not going to achieve anywhere near these numbers. Seriously, you’ll need to have a strong sense of eco-friendliness to step softly enough on the throttle and go slowly enough on the highway, the necessary protocol for hypermiling every drop of fuel from the CUV’s 47-litre tank. I’d rather just give in to the Cooper S’ beguiling performance temptation and let it rip, the little four’s high-revving machinations, whirring turbo and snorting exhaust all the happier for the opportunity to play. Its 1,475-kilo as-tested curb weight allows for quick responsiveness off the line and through the curves, the latter helped along by a wonderfully sorted MacPherson strut front and multi-link rear suspension setup, along with Servotronic-enhanced electric power steering. It responds quickly to turn-in resulting in ridiculously little body lean compared to other crossovers, even when charging through tight corners at speeds that can’t be reiterated for fear of self-incrimination. The Cooper S Countryman is a superbly fun little CUV to drive quickly, the automatic-equipped model I tested fitted with standard steering wheel paddle shifters to increased the fun factor times 10.

Likewise the Countryman’s big four-wheel discs slow it down with an immediacy most rivals can’t match, critically important when trying to get the most out of the wee CUV on a winding back road, and much more critically important when a slower moving vehicle pulls out in front of you unawares. Take it out on the highway and the Countryman cruises along happily too, its ride quality firm yet comfortable, its seating position and multi-adjustable perches perfect for long trips.

That’s the beauty of the Mini Countryman: its wonderfully practical and efficient, yet it’s about as much fun as family haulers get. Even base models handle brilliantly, while the Cooper S and top-line JCW make you feel as if you’re piloting a speedy little sports car. What’s more, they look way cooler than your average small CUV. All in all, few competitors match up.
©(Copyright Canadian Auto Press)
Car Shopping Tools