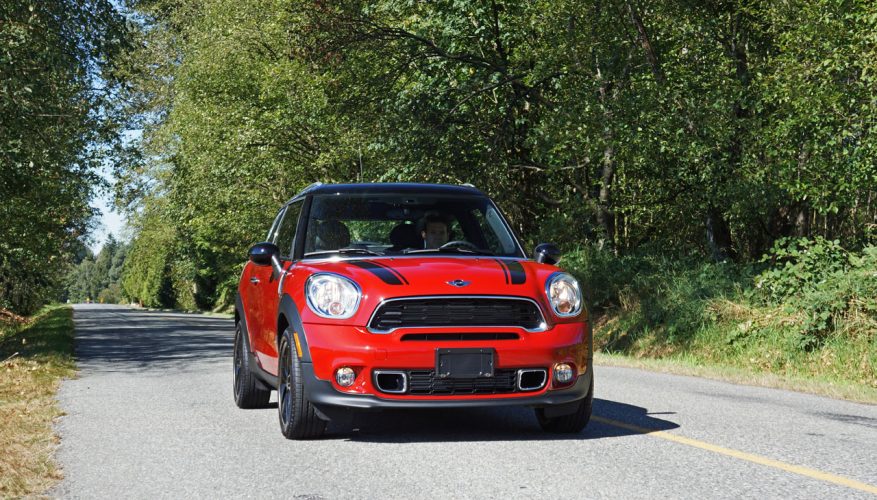 By: Trevor Hofmann
Remember when the Mini brand re-launched under BMW’s ownership way back in 2001? The sole model was the three-door hatchback now referred to as the Cooper Hardtop. It took another four years before the Cooper Convertible was added to the mix, and then another three before the elongated Clubman model with its cool Dutch-oven rear doors entered the lineup. These three happily filled out Mini’s arsenal until just three years ago when the Countryman crossover SUV upped the size and versatility of the Mini equation, quickly followed by the smallest modern Minis to date, the two-seat Coupe and Roadster fraternal twins that zipped, zigged and zagged onto the scene a year later. The latest addition to what has now grown into a seven-model Mini lineup (not including the brand’s S and John Cooper Works trims, or the five-door Hardtop that’s on its way next year) is the Paceman, a unique three-door sport coupe crossover introduced last year.

To wrap your mind around the Paceman, think of how BMW’s ultra-niche X6 has transformed the concept of a crossover SUV. The Paceman adds even more sport to the utile combination thanks to a body shell with only two doors and a liftback that lays flatter than Mini’s usual upright design. The result is the only two-door sport coupe crossover in the subcompact segment, and one of only two in the entire North American auto market. That other model is the much pricier and larger Range Rover Evoque Coupe, fine company indeed. It sits within a compact segment that Mini never even comes close to approaching, all of its cars and crossovers comfortably filling the burgeoning subcompact class.

Paceman in mind, a quick glance makes it look smaller than the five-door Countryman crossover SUV that it shares platform architectures and All4 all-wheel drivetrains with, but in actual fact the Paceman’s lengthened bumper makes it a hair longer at 4,120 millimetres compared to 4,108. Both ride on the same 2,596-mm wheelbase and are almost identical in width at 1,786 mm for the Paceman and 1,789 for the Countryman, although the two models’ heights differ significantly, with the Paceman a full 43 mm lower overall than the Countryman, at 1,518 mm tall compared to 1,561.

It’s easy to see the familial resemblance between the two models, the Paceman wearing the same tougher, more rugged face of the Countryman, including its larger frowning grille, bigger ovoid headlamp clusters, deeper front spoiler with its black plastic lip and corresponding cladding that wraps up and around each muscular wheel cutout, across each rocker and around the tail end. Also like the Countryman, a unique thick chrome engine vent/trim garnish slashes across the rearmost portion of each front fender, while at the very back a larger rear winged Mini emblem joins bold chrome block letters spelling out the model name across the hatch. Finally, larger taillights are horizontal and wrap farther around each flank instead of the Countryman’s vertical design, for a sportier look. The end result is a cute ute with attitude, especially when dressed up in mid-grade S trim like my tester.

You can get the Paceman in one of three trim levels, starting with the base Cooper, which is followed up by the Cooper S I drove, and topped off with the John Cooper Works (JCW). The base Cooper gets Mini’s 1.6-litre inline four-cylinder engine, capable of producing 121 horsepower and 114 lb-ft of torque, and comes mated to either a six-speed manual gearbox or six-speed automatic, while All4 all-wheel drive is optional. If you want more performance, the Cooper S I tested puts power down to all four wheels standard via a direct-injection and twin-scroll turbocharged version of the same engine resulting in 181 horsepower and 177 lb-ft of torque, although it will make up to 192 lb-ft of torque on overboost. Lastly, the JCW-powered version puts out 208 horsepower and 192 lb-ft of torque, or 207 lb-ft on overboost. The results are zero to 100 km/h sprint times of 7.8 or 8.1 (depending on whether your driving a manual or automatic) in the S, and 6.9 seconds for the JCW (the base Cooper numbers are TBA), plus top speeds of 188 or 184 km/h for the base Cooper (manual or automatic), 205 for the S, and 226 or 224 for the JCW.

While I’ve never shied away from more power, the Cooper S All4 Paceman delivered spirited acceleration from standstill and loads of passing performance when on the highway, while all-important fuel economy is rated at 8.1 L/100km in the city, 6.4 on the highway and 7.3 combined with its six-speed manual gearbox, or 8.7 city, 6.5 highway and 7.7 combined with the six-speed automatic, which incidentally is a great set of numbers for anything in the crossover utility class. The base model gets an even more appealing rating mind you, at 7.4 city, 5.7 highway and 6.6 combined with the manual, or 8.1, 6.6 and 7.4 with the autobox.

Another way the Paceman runs away from its crossover competitors is in the corners, where its small dimensions and commensurately lightweight 1,479-kilo as-tested curb weight combines with a standard lowered sport suspension featuring MacPherson struts up front and a multi-link setup in back, plus Servotronic-enhanced electric power steering for a CUV with lightning quick responses to turn-in and very little body lean even when moving through tight curves at a fast clip. Yes, this is a really fun little crossover coupe to drive quickly, automatic-equipped cars kitted out standard steering wheel paddles to up driver engagement considerably. The Paceman cruises nicely on the highway too, with ride quality that’s better than you’d likely expect, while braking performance is excellent even after repeated stomps.

Of course, most of us need a car to do more than just raise our adrenaline levels, so Mini has designed the Paceman to be one of the more functional sport coupes you’re likely to experience. Along with a thoroughly accommodating front seating area, with ample room for bodies big and small, the rear quarters are surprisingly roomy too. My five-foot-eight frame could almost stretch out in the back seat, while there was plenty of excess headroom that should benefit taller folks. Behind the rear seatbacks is a tidy cargo compartment good enough for 330 litres of gear, or about the size of an average compact sedan’s trunk. What you can’t do in a compact sedan, mind you, is extract a full 1,080 litres of gear toting space when the 50/50 split-folding rear seatbacks are laid flat, turning this little sports coupe crossover into the ideal weekend (or for that matter, weeklong) getaway machine for two.

Inside, the Paceman gets the same high level of premium quality detailing that Mini has become respected for. The majority of surfaces are soft to the touch, while optional leathers and high-quality fabrics join forces with chrome metalwork, really cool toggle-style switchgear and some of the best electronic interfaces in the industry for an upscale experience that will surely impress. For $26,800 plus $2,295 for freight and pre-delivery prep, the Cooper Paceman’s standard feature set is good, including pushbutton ignition, a tilt and telescopic multi-function leather-wrapped steering wheel with cruise, powered windows with auto up/down all-round, heated powered mirrors, air conditioning, high definition radio, an on-board computer, nice looking dark silver interior trim, comfortable and supportive sport seats upholstered in genuine looking black leatherette, multi-coloured ambient lighting, 17-inch five-star double-spoke light alloy wheels wrapped in 205/55R17 all-season runflat tires, four-wheel discs with ABS, brake assist and Cornering Brake Control (CBC), dynamic stability control, seven airbags including one for the front passenger’s knees, and a crash sensor that shuts off the fuel, turns the lights on and unlocks the doors if required.

If you want to add standard dynamic traction control you’ll need to move up to the $31,200 Cooper S, which as mentioned also includes standard all-wheel drive to go along with its more powerful engine. The cockpit surfacing is done out in a dark anthracite for a sportier look, while you now have the option of getting the same dark anthracite (black) roofliner and/or 18-inch twin-spoke black burnished light alloy wheels that come standard on the JCW. Alternatively, you can forgo the standalone wheel upgrade I just mentioned and opt for the $990 Sport package that includes either a set of silver 18-inch turbo-fan light alloys or black 18-inch five-star double-spoke composite rims (the latter costing an extra $690), plus the JCW’s more tightly tweaked suspension for improved handling, and the JCW’s standard Sport button added to the driver controls for a more engaging driving experience. Want more? Instead of going all the way for a JCW model you can opt for the $2,900 JCW package that adds the 18-inch twin-spoke black burnished light alloys I mentioned first, plus the anthracite roofliner and everything in the Sport package, as well as interior trim in checkered black, a leather-wrapped JCW steering wheel, JCW aero kit, HID headlamps and cool white turn signals.

My Cooper S All4 Paceman tester didn’t include any of the above-mentioned extras except for the anthracite roofliner, a $250 standalone option, but it did come with that paddle-shift actuated six-speed automatic I mentioned earlier, for $1,300 (also available on the base model), plus the $1,990 Premium package (available on all trims) that includes fog lamps, automatic rain-sensing headlamps, automatic climate control, an auto-dimming interior mirror, heated front seats, a front centre armrest, Media Connect with Bluetooth and USB integration, and a gorgeous panoramic glass sunroof overhead. Additionally, my tester included the $500 Style package (also available with the base model) that added more chrome detailing inside and out, plus piano black cockpit surfacing and interior trim. Lastly, and by far my favourite add-on is Mini’s $1,850 Wired package (available in all trims). Along with one of the best infotainment systems in the entire industry, especially if you’re connecting with an iPhone, Mini Connected allows smartphone integration for all platforms, along with display audio, Bluetooth and USB audio, voice recognition, and navigation, all set into the brand’s dinner plate-sized central speedometer pod, the needle of which circles around the outside of the infotainment display for an active visual that’s like no other. My tester also had $390 proximity sensing Comfort Access to ease entry and exit, plus a $750 480-watt 10-speaker Harmon/Kardon sound system that sounded absolutely brilliant!

Extras not included in my tester include the $750 Lights package (for base and S trims) that adds adaptive HID headlights and white turn signals, and the $550 Mirrors package (for all trims) that adds auto-dimming exterior mirrors. Standalone options that can be added on include $300 roof rails, $500 rear parking sonar, a $500 alarm system, and much more.

I love all the personalized detailing you can do with the Paceman right from the factory, or any Mini for that matter. On top of these upgrades the funky British brand offers loads of fun accessories from the dealer, like those Union Jack mirror caps and roof decals you’ve likely seen on Minis over the years. My tester didn’t get these, but along with its Blazing Red metallic paint at $245, it also included no-charge black mirror caps (body-colour is standard while white is also a no-cost option) and black bonnet stripes for $130 (white can be chosen instead). What’s more, this car’s gloss black 17-inch five-star double-spoke alloys are a $150 option, while loads of other wheel choices are available. Inside, $1,000 bought Hot Cross Carbon Black upholstery made up of multi-coloured crisscrossing fabric insets and white-stitched leather bolsters for a really sweet look. Alternatively you can opt for full leather in black, light grey, copper red, or black with red piping if you go with the JCW package. There are many more upgrades and accessories to choose from, allowing you to create something that truly complements your personal style and active lifestyle. When added to the Paceman, a car that’s already as unique as vehicles get, you’ll have an ultimately cool ride that won’t be showing up around every corner.