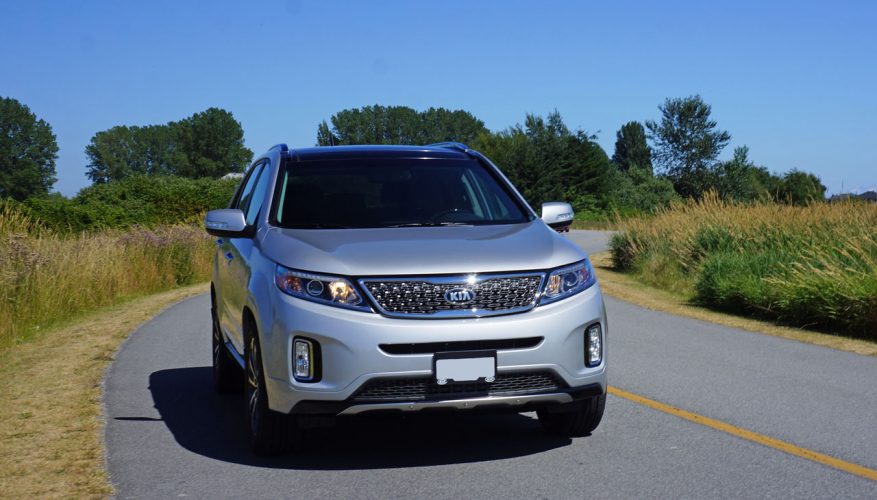 By: Trevor Hofmann
Have you ever questioned what the word “new” means in the automotive marketing dictionary? Obviously if a vehicle has never been licensed before it’s new, but that’s not what I’m referring to. Rather, I’m talking about when some brands say a given model is new when in fact it’s a “refresh”, “facelift”, or “mid-cycle update”.

Kia could have quite reasonably called its 2014 Sorento all new, being that it rides on a new platform architecture design, incorporates a new direct-injection V6 engine, features new interior design with nicer materials, offers new telematics, and boasts a new infotainment system, but they didn’t. They rightly stated that the updated Sorento was “significantly redesigned” and much more than a “freshening,” being that 80-percent of the 2014 model is new, and factoring in that its arrival last year made it four years since this second-generation went from the original truck-like body-on-frame design to unibody, its styling has only been mildly refined, albeit with good effect, and it rides on the same 2,700 mm (106.3-inch) wheelbase as its 2010 through 2013 predecessor. For all points and purposes, however, the 2014 Sorento is about as new as new models get.

Now that we have that covered, how does it measure up in the hotly contested mid-size crossover utility market? According to J.D. Power and Associates, the Sorento is the ninth best-selling midsize SUV in North America, although when we weed out vehicles that wouldn’t normally compete with the Sorento, such as a few off-road ready Jeeps, one of which is a compact, and a tall wagon from Subaru, it’s actually fifth most popular. That’s a giant leap upward from a brand that not too long ago a mere sideline player in the SUV segment. Now the Sorento and Kia in general is a serious contender in almost every mainstream category in existence, with more appealing styling than many rivals, good overall quality, standard and optional feature sets that are richer than its peers, and once again according to J.D. Power, dependability that’s at least mid-pack, while the South Korean brand’s five-year comprehensive warranty is a better bet than the majority of competitors too. These are the attributes that make Kia vehicles, including the Sorento, such good value.

My weeklong tester was a Sorento EX V6 AWD, a mid-range model albeit its feature set makes it seem more like a top-line machine when compared to rivals. Just take in the stainless steel door scuff plate that greets you just after you open the door via its proximity sensing remote access system that also features pushbutton ignition, the latter feature grandfathered in from the lesser LX-V6 package, and then soak in its leather-lined interior with heated rear seats. All window seats are extremely comfortable, but the driver’s has the added advantage of memory for its eight-way powered adjustability with lumbar support, again an item also featured on the LX-V6. Likewise for the meaty leather-wrapped steering wheel, although it comes heated in the EX. The leather-adorned shift knob is the same though, as is the eye-saving auto-dimming rearview mirror with integrated compass, and the ultra-useful trailer package. More EX features include standard all-wheel drive, fully automatic dual-zone temperature control with ionized air filtration and auto defog, three 12-volt power outlets accessible to front occupants, a household plug-style 110-volt power inverter, and Kia’s very good and easy to use UVO infotainment system with its handy rearview camera system. Some items that improve the EX model’s exterior include bulb-style LED DRLs instead of the Sorento’s standard bar-style LEDs, power-folding side mirrors, 18-inch alloy wheels on 235/60 all-season tires, and a rear spoiler. While this might seem like the stuff of a mainstream crossover approaching the $40k mark, the Sorento EX starts at only $34,195 plus $1,665 for freight and dealer prep. Additionally, my tester featured a gorgeous tilt and sliding powered panoramic sunroof package that also included an attractive set of low profile chrome roof rails, which upped the total price to $35,395, plus freight.

To be clear, even my optioned out Sorento EX isn’t fully loaded, the ritziest model being the SX, which makes the panoramic sunroof and chrome roof rails standard, plus adds Xenon high-intensity discharge (HID) headlights, LED lightbar taillights, sporty looking body-colour bumpers and mouldings, a classy chrome-finished rear garnish, and a sweet set of 19-inched machined-finish alloy rims on 235/55 all-season rubber. Inside, red ambient mood lighting now shows off the model’s upscale interior, while the stainless steel door scuffs are illuminated. Other details include a leather instrument cluster hood shading an enhanced Supervision TFT/LCD instrument cluster, an eight-inch multimedia touchscreen with navigation, 10-speaker Infinity audio with a front centre speaker, sub-woofer and external amp, an auto-dimming rearview mirror with a Homelink remote, ventilated front seats, a power adjustable passenger seat, a powered tailgate, blind spot detection, and Kia’s FlexSteer system that let’s you adjust steering effort between Comfort, Normal and Sport modes by pressing a button just below the cruise control on the right-side steering wheel spoke. The only options this model offers is seven-passenger seating with a 50/50 split folding third row, and third row ventilation (incidentally seven-passenger seating is only optional on the SX and second-tier LX-V6 models). Without the upgraded third row the Sorento SX will set you back $40,595 plus freight, the options costing $1,200 for a total price of $41,795.

I’d be remiss not to tell you that you can get into a 2014 Sorento for as little as $26,695, and it’s not such a bargain basement affair. None of the items I’ve already mentioned are included, but the Sorento EX V6 I drove and most other trims feature standard fog lights, automatic headlights, power heated body-colour side mirrors with integrated turn signals, variable intermittent wipers with a windshield de-icer, attractive dark woodgrain interior accents, tilt and telescopic steering, air conditioning with air filtration, heated front seats, rear side window sunshades, a six-speaker AM/FM/CD/MP3 voice-activated audio system with steering wheel-mounted audio and cruise controls, AUX and USB inputs, satellite radio, Bluetooth hands-free phone connectivity, a trip computer, overhead sunglasses holder, back-up warning system, a full assortment of airbags, four-wheel disc brakes with ABS, traction and stability control, vehicle stability management, and hill assist control.

The Sorento is roomy for five and a bit cramped for seven, although being an EX my tester didn’t include the third row. The second row splits 60/40, which is par for the course in this segment, but then again some of its rivals are showing up with 40/20/40 split rear seatbacks that offer greater passenger/cargo flexibility. Behind the second row there’s 1,046 litres of cargo capacity, which opens up to a sizable 2,051 litres when those seatbacks are folded flat. Kia also includes an under-floor storage compartment in back for hiding valuables or keeping emergency kits and tools that aren’t used often from tumbling around, while a standard rear cargo cover and luggage net do likewise for items stored above the load floor.

From a driver’s perspective the Sorento is comfortable with all controls intuitively laid out and easily within reach, while visibility is excellent all-round. The ride is smooth and nicely sorted, its fully independent suspension capable of soaking up road imperfections nicely while delivering well-balanced handling, as long as you don’t push it too hard. Don’t get me wrong, the Sorento is more capable around corners than many of its peers, but none in this class will rival premium crossover SUVs with respect to performance, unless we’re talking power off the line.

The Sorento’s new 3.3-litre direct-injection V6, standard in anything above base, is quite wonderful in this respect. It pushes 290 horsepower and 252 lb-ft of torque through a smooth-shifting six-speed automatic with Kia’s Sportmatic manual mode, giving plenty of straight-line acceleration and ample passing power. Of course it’s not quite as thrifty as the base LX model’s 191 horsepower 2.4-litre direct-injection four-cylinder with 181 lb-ft of torque, the four-cylinder achieving a claimed 11.8 L/100km city and 8.7 highway in front-drive guise or 12.2 and 9.4 in all-wheel drive, compared to the V6 model’s 12.7 city and 9.0 highway front-drive rating and 13.4 and 10.0 all-wheel drive results, but both ratings are very good for the class. By the way, all of the above numbers reflect the new five-cycle Transport Canada rating system that should be much more realistic than the old two-cycle system.

After a week with the 2014 Kia Sorento EX V6, it was easy to appreciate why it has become such a strong seller. With its good looks, great interior, fabulous assortment of features, impressive warranty and very approachable pricing, no doubt it will stay competitive throughout its 2015 model year until the all-new (and I mean completely changed and significantly larger) 2016 model appears sometime next year.
©(Copyright Canadian Auto Press)
Car Shopping Tools