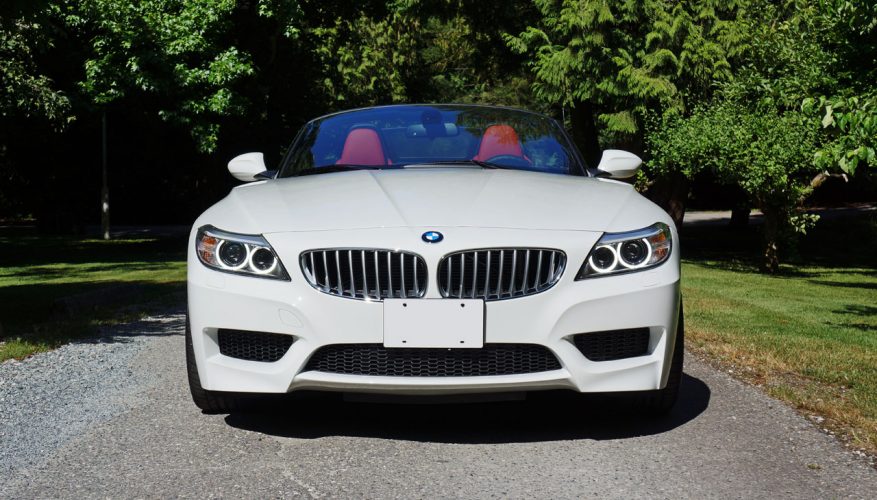 By: Trevor Hofmann
Look long and hard to find a better-looking two-seat roadster than BMW’s Z4. It’s difficult to do.

Styling is always a personal thing, of course, as is human beauty. But just as experts in the field of the fine arts or for that matter the modeling profession will tell you there are certain physical features that most people find more aesthetically pleasing than others, there are also classic sports car design cues that cause grown men to go weak in the knees and people who don’t even pay attention to cars to sit up and take notice. BMW combined the classic long hood and short rear deck to design perfection with its graciously beautiful Z8 in 1999, the Grace Kelly of sports cars and possibly the four most memorable days I’ve ever spent in a road car. As much as I love this ode to the perfectly proportioned ’56 507, it’s my personal opinion that they one-upped the brilliant Henrik Fisker design when they introduced this second-generation E89 Z4 in 2009.

It’s also stood the test of time very well. It doesn’t seem that long ago that I tested the first 2009 model year Z4 in sDrive35i trim, but maybe that’s because I’ve driven a few since including a 2012 sDrive2.8i, a 2014 sDrive35i that one of my contributors reviewed, and this latest 2015 sDrive35i. Each turn behind the wheel has left me totally satiated yet longing for more, exactly how a great sports car is supposed to leave you.

It all starts as you approach the car. Ask yourself, how does this vehicle make me feel just to look at it. This is a sports car after all. We don’t buy these things for practical purposes, so it better move you while standing still. The Z4 does this and more for me. Its lines are at once modern and athletic, yet there’s grace to its styling that borders on retro. Like it comes from an earlier time altogether. A simpler era, when time seems to stand still. Maybe it’s the attention BMW has painstakingly paid to each finite detail. The elongated shape of its classic twin-kidney grille. The unique upward turn each of its headlamp clusters take as they meld into the leading edge of the fenders. The exquisite brilliance of each jewel-like headlight lens, or the blue and white BMW roundel on the car’s flanks just ahead of glistening bright finished engine vents. Even the side mirror caps are elegantly penned pieces of modern art all on their own, but added to the sum of the parts they simply play supporting roles. From profile, the topmost line of the front fender at first swells upward and then arches downward as the creased rocker below slowly bends up to meet the rear portion of the long narrow door and rear wheel arch, the car’s rear fender-line forming a feline’s haunches ready to pounce as they flow backward into the taillights, which themselves complement the rest of the car’s form to perfection. There isn’t a line on the Z4 that interferes with another, all elements coming together to form an ideal whole.

That retrospective modernity continues inside, where the red leather upholstery of my tester filled me with memories of a certain ’73 3.0CSi coupe I still regret not buying. BMW takes things further back by covering much of the dash and lower console in a hound’s tooth-like patterned aluminum that brings back memories of classic engine-turned metalwork of yore. Its centre stack, while filled with high-resolution infotainment and the expected premium-level climate controls, gets switchgear designed to look like a row of circular ancillary gauges that conjure the ghosts of sports cars past, but look down at the lower console and its iDrive controller and artistically shaped shift lever let you know the Z4 only points to the future. No, there is nothing out of date in this interior. It only pays tribute to the glory days of motorcars.

Then again, is it not possible that sometime in the future we’ll look back at this era of the automobile with longing fondness? I’ll hazard to guess yes. Those glory days of motoring never resulted in an engine anywhere near as capable as BMW’s modern-day straight six, a mechanical marvel that not only delivers breathtaking acceleration, but combines it with sensational sounds simultaneously from ahead of the firewall and the rear of the car where the exhaust lets out wonderfully growling blats of exuberance with each upshift.

BMW provides a six-speed manual standard, but my tester was equipped with the brand’s optional and superb seven-speed dual-clutch automated manual. Shifts are blisteringly quick and faster still if set to Sport or Sport+ mode, BMW claiming 5.3 seconds to 100km/h with this paddle-shift actuated automated gearbox compared to 5.4 with the manual, if an expert driver manages the latter. The inline-six accomplishes this task thanks to an even 300 horsepower and 300 lb-ft of torque; numbers that I’m guessing are the usual conservative estimates the Bavarian brand provides. If you want more, simply add an “s” to the Z4 sDrive35i nomenclature and 335 horsepower with 332 lb-ft of torque combine for a 5.0-second sprint to 100km/h in order to satiate your appetite for speed, although you won’t have the option of rowing through a manual box as BMW makes the quicker-shifting automated gearbox standard for this model.

I wasn’t counting milliseconds during my time with the Z4, mind you. Rather, I just found my comfort zone, powered back the quick-folding two-piece retractable hardtop, tuned in my favourite station on the Harmon/Kardon audio system, set the drive mode to Sport, nodded to my significant other with a cocky half grin and naughty wink, planted my foot to the throttle and took to the open road. With windswept hair, menacing machinations conspiring from under the hood, and speeds I dare not commit to script for fear of self-incrimination, we were up to no good and enjoying every second of it.

The Z4 sDrive35i is astoundingly stable no matter its rate of speed or the tightness of turn, not only reacting to steering input positively, but going about its business with an unflappable confidence that bordered on nonchalance. This car is fast. I’m not talking about burning through its Bridgestone Potenza 225/35R19s with school kid bravado fast, although it’ll light up the rear rubber if leaned on in Sport+ mode (which defeats the traction and stability control), but rather swapping curves on a serpentine switchback fast. It only makes sense that the company responsible for bringing us some of the best sport sedans ever created can also build a two-door roadster capable of mixing it up with the best in the drop-top segment.

The 2015 BMW Z4 starts in the mid-$50s in 28i guise, although my 35i tester begins life at $63,900, before options were added such as an M Sport package at $1,950, a Premium package at $2,600, Navigation package at $2,000, ConnectedDrive Services Professional upgrade at $850, plus other minor items that pushed the price up to $74,412 including its $2,295 freight and dealer prep charge. These upgrades, along with the Z4’s extremely generous suite of standard features added a level of luxury few of its peers can match.

But let’s face it. You already know what sports car you want, and if you’ve chosen a Z4 I commend you. You’ve got great taste.
©(Copyright Canadian Auto Press)
Car Shopping Tools