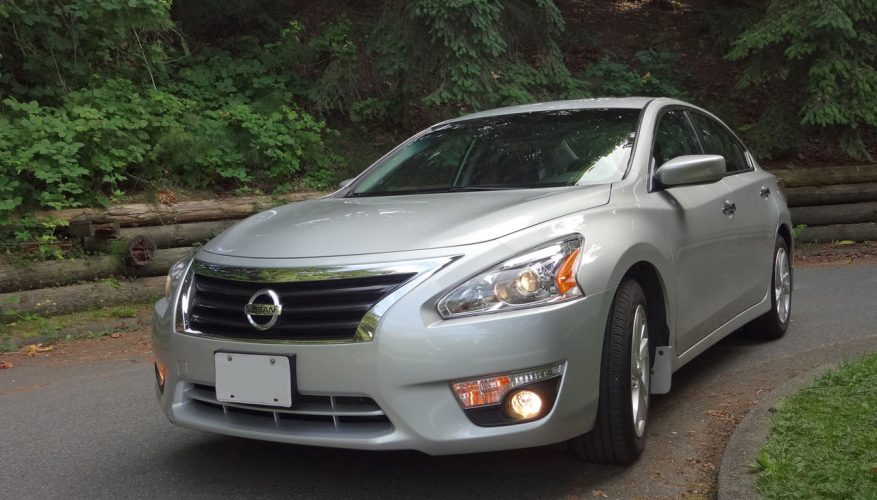 By: Simon Hill
When it comes to sophomore designs, you know the manufacturer got it right when it doesn’t make any significant changes. Such is the case with Nissan’s Altima, which was thoroughly redesigned for the 2013 model year and carries into 2014 with only a few relatively minor content revisions.

These revisions include improved sound deadening, revised seat cloth, chrome exhaust tips on all models, and the introduction of the NissanConnect Apps smartphone integration platform. There are also some new packages available according to Nissan, chief amongst them a Technology Package with navigation, blind-spot warning system, moving object detection, lane departure warning and Sirius Travel Link, available on SV and SL trim Altimas.

Stylistically, last year’s redesign brought the Altima in line with the appearance of the bigger Maxima (and not coincidentally the new, smaller Sentra as well). It’s a good looking family car in my opinion, with the "Coke bottle" beltline giving it a graceful overall profile, and the sculpted headlights and taillights adding a slight (and welcome) touch of menace.

Inside, the Altima uses a mix of rigid plastics and soft-surfaced materials to create an ambience several notches above what one might expect for a car with a $25,273 base price (that’s including the $1,575 destination fee). There are soft surfaces wherever you’re likely to come in contact with, including front and rear door uppers, the instrument binnacle and the passenger’s side dash face (although the top dash pad is rigid plastic, and a bit shiny at that). The door inserts and console top are keyed to match the seat upholstery, and there’s silver-painted plastic trim to add a splash of visual interest. Even in base trim, the Altima gets pushbutton start, Bluetooth telephone connectivity, air conditioning, cruise control, tilt and telescoping steering and remote keyless entry.

Things I particularly liked about the Altima’s interior are the good outward visibility compared to many of its competitors, the convenient closable cubby at the bottom of the centre stack (letting you hide your electronic devices next to the auxiliary input, USB input and 12V plug), and the "Zero Gravity" seats that are designed for maximum comfort based on NASA research into astronaut posture. In addition to driving the test car for a week, I rented a 2014 Altima for 10 days in Hawaii (they are understandably popular in rental fleets) and took it for an extended road trip around the Big Island during which both my wife and I commented on just how surprisingly comfortable the seats remained after long hours on the road. My two tall teenagers were equally happy thanks to plentiful rear legroom and headroom. Trunk space is also good at 436 litres, although you need to pay a bit of attention when loading things in order to keep items clear of the unprotected hockey-stick hinges.

On the negative side of the ledger, I did notice that the silver-painted trim along the edge of the Hawaiian rental Altima’s centre console suffered from paint lift, presumably due to the constant exposure to sunscreen-smeared legs resting against it. I’m also not convinced of the logic in using a mix of white and orange lighting for the controls and instruments, as it leaves the centre stack (which uses mostly orange lighting) looking like it’s from a different generation car compared to the instruments (which use white lighting). I was, however, convinced of the logic of the major controls, which all fall easily to hand and are intuitive to use.

Under the hood, the Altima is available with a choice of two engines: a 3.5-litre V6 that generates 270 horsepower and 258 lb-ft of torque or as in my test car a revised and improved 2.5-litre inline-four that produces 182 horsepower and 180 lb-ft of torque. In either case, the engine is hooked up to a standard-equipment CVT (continuously variable transmission). Unlike in the previous-generation Altima, there is no manual transmission available.

I found the four-cylinder engine to be plenty powerful for everyday driving, and working with the CVT it’ll launch the Altima from 0 to 100 km/h in just under eight seconds. It’s worth noting that while Nissan’s unwavering dedication to the use of CVTs used to be a bit of a defining characteristic of the marque – and by extension of the Altima itself – this is becoming less and less true these days. Partly this is because other marques are jumping on the CVT bandwagon (think Honda Accord and Subaru Legacy), drawn by the transmission’s ability to always keep the engine at the ideal revs for optimal fuel economy. It’s also partly because the latest-generation CVTs are much improved over earlier efforts.

In normal driving the Altima’s transmission is completely unobtrusive, and allows the engine to tick quietly along just above idle, making for a serene motoring experience. Mash the go pedal and the engine revs up rather noisily and then remains near redline until you back off the throttle, but you get used to this characteristic. The Altima offers programmed virtual "shifts" if you slip the gearshift into DS (sport) mode, but frankly I found this feature more distracting than anything else, as it made it seem as if the engine was hiccupping (and manual control of the virtual shifts isn’t available unless you opt for the 3.5-litre engine). I found sport mode most useful for descending hills, as it enables a greater degree of engine braking. Overall, I missed the directness of a traditional automatic (or a manual transmission) when piloting the Altima along twisting volcano roads in Hawaii, but the rest of the time I found the CVT entirely acceptable – and that’s coming from a long-time CVT skeptic.

The Altima 2.5’s performance at the fuel pump sealed the deal, as no matter whether I was driving on tropical highways or damp Vancouver city streets I managed to achieve excellent fuel economy. Official Transport Canada city/highway ratings for the Altima 2.5 come in at 7.5 / 5.1 L/100km, and I averaged 8.6 L/100km in mixed driving in the test car (this is in line with the upcoming five-cycle testing for 2015 models, which will work out to about 10.2 / 7.4 L/100km based on EPA estimates).

The Altima doesn’t disappoint in terms of ride or handling, either. It has a well-sorted chassis that offers a perfectly comfortable ride during everyday driving, while remaining genuinely pleasurable to wind along twisty roads. Part of this is due to Nissan’s Active Understeer Control, which works by braking the inside wheels during cornering in order to improve steering response and control. It’s an effective but unobtrusive system, so you don’t feel it doing its thing and all you notice behind the wheel is the resulting crisp handling.

The Altima’s rigid chassis undoubtedly aids in the handling department, while also helping protect occupants in the event of a crash. In testing performed by the U.S. IIHS (Insurance Institute for Highway Safety), the Altima achieved good safety ratings in most crash tests and an acceptable rating in the challenging small overlap front crash test, earning it an IIHS Top Safety Pick award.

All in all, while the Altima doesn’t necessarily stand out in any one regard, it’s a very well rounded and easy-to-live-with car. Buyers shopping for a mid-size family sedan will certainly want to give the top-sellers a look, but savvy shoppers should definitely add the Nissan Altima to the list of must-sees.