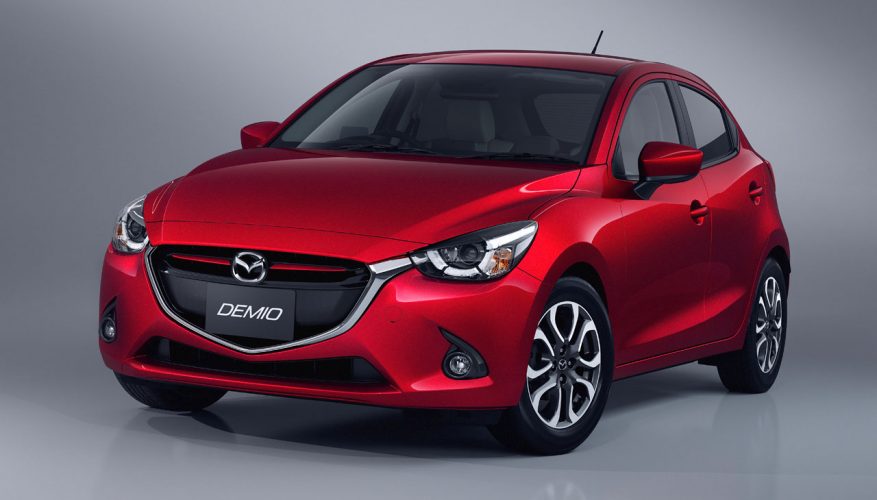 By: Trevor Hofmann
We won’t be seeing the new Mazda2 in the metal just yet, but next year the stylish subcompact hatchback will make its way to Canadian Mazda dealers. Ahead of that 2016 model year Canadian-specific car, Mazda’s home market of Japan will receive the updated 2 under its Demio nomenclature later this year.

The 2015 Demio looks a great deal like the Hazumi concept vehicle that rolled onto Mazda’s Geneva Motor Show stage last March, so those who like that stylish hatchback should be pleased with what the automaker has done with the new production car’s design. As expected, the company’s new trademark five-point grille looks much like it does on the larger Mazda3, 6 and CX-5, as does the brand’s unique headlight treatment. The new Demio is proof that the automaker’s Kodo design language works well on any size vehicle, car or crossover.

In case you’re thinking that it’s somewhat soon for Mazda to be bringing out a new 2, being that the model only debuted here in 2011, consider that this is the fourth generation of Demio in Japan, and the current car has already been on sale there for seven years.

It’s a bit too far down the Japanese brand’s pipeline to be discussing North American specifications for this next-gen Mazda2, but overseas models will come with three engine choices including a 99-horsepower 1.3-litre four-cylinder, a 104-horsepower 1.5-litre four, both gasoline-powered, plus a 1.5-litre clean diesel. A six-speed manual will come standard with a six-speed automatic optional. The engines will incorporate Mazda’s SkyActiv technologies, which include high compression and direct injection for stronger performance and fuel economy. The new car is expected to be lighter than the outgoing model too.

The upcoming Mazda2 is expected to improve interior quality and refinement to levels that at least match its subcompact competition, while tech features will play a dominant role in reaching the younger buyers who frequent this class of car. The Demio shown at the home market unveiling included the same type of smartphone/tablet-style touchscreen mounted on top of the centre console as the new Mazda3 and others, along with the rotary controller on the lower console next to the handbrake. Likewise, the car’s primary gauge package looks similar to that used in its larger sibling.

We can expect the European version of the Mazda2 to arrive at the Paris Motor Show in October, while its first stop in North America will likely be Los Angeles in November.
©(Copyright Canadian Auto Press)
Car Shopping Tools