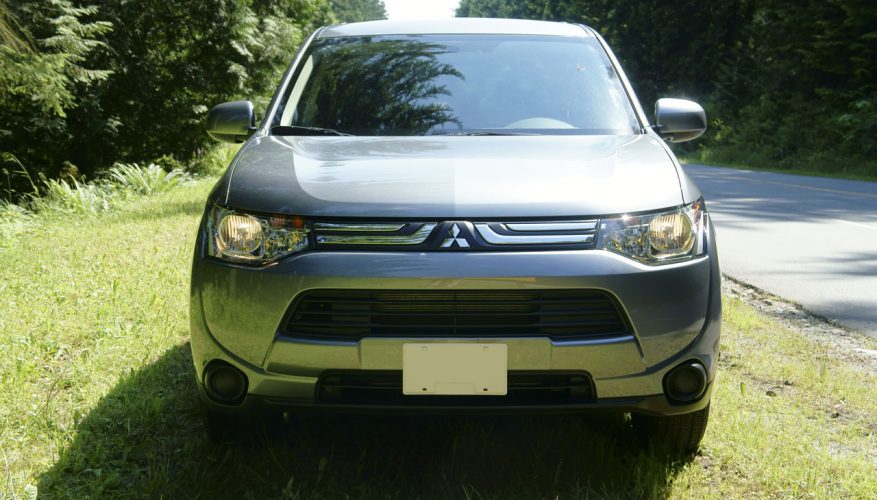 By: Jennifer Hofmann
It seems that if you want a smaller SUV with a six-cylinder engine you’d better move quickly… quickly to the Mitsubishi store that is. Gone are the days I think back to with fondness. Days of flannel and socks with Birkenstocks, and driving a big SUV without feeling guilty for the environmental costs or the financial burden of ever rising gas prices. The Mitsubishi Outlander is the only mainstream compact crossover in Canada available with a V6 (the Chevrolet Equinox and GMC Terrain twins aren’t very compact despite how GM categorizes them). I spent the week in a base model ES model that only has a four-cylinder engine, and I was faced with a now more common dilemma: fuel economy or power?

The ES model’s four-cylinder is 2.4 litres in displacement and sends power to the front wheels through a CVT, a fuel-saving 166 horsepower made in the process. The V6 I spoke of before is a 227 horsepower 3.0-litre unit available with SE and GT models that comes paired to a six-speed automatic transmission. While still a bit conservative for a V6, it’s better for those more performance minded. If fuel economy is more of a priority to you, you probably won’t mind the continuous whine and rubber band feel of the CVT (continuously variable transmission) that most driving enthusiasts continuously whine about, or the lack of available power when you step on the gas pedal. I’m guessing you’ll be much more interested in Mitsubishi’s claimed 8.2 L/100km city, 6.3 highway and 7.8 combined fuel economy rating. Yes, for the 30-percent of you who are buying the Outlander with the smaller engine, I’m sure that will more than make up for the CVT whine. An added perk is the consumption metre on the instrument panel that helps keep tabs on the fuel you’re expending. It works nicely with the Eco mode feature that, by the push of a button, reduces drag on the engine by limiting how quickly the throttle responds to input as well as much air conditioning you’re using.

There have been a lot of changes with this year’s Outlander, and while completely changed outside I’m most impressed with the interior upgrades. The materials are very high quality. Soft-touch plastics can be found in all the right places: the dash top, below the centre stack, on the doors. There’s engine turned metal trim placed perfectly on the dash and door accents, while a leather-wrapped steering wheel and gearshift nob adds a premium touch. The seats are really comfortable, but I didn’t love the upholstery. The second row seats are just as comfortable, still with good headroom and added legroom this year. Most adults will fit in well back there and should be relaxed for long periods of time. If you want more seating positions than the usual five you won’t find them in ES trim, unfortunately, but you can upgrade to an SE that makes a third row standard.

I was surprised at the Outlander’s starting price of $29,998 ($2,000 more for AWD) considering the high quality materials, but once I spent more time in it I saw a few places I’d like them to allocate more funds to. The rearview mirror looks about 20 years old. There isn’t a back-up camera available at all, while the display features are pretty lame.  There’s automatic heat and cooling, which is unusually good, but you’ll have to upgrade if you want dual controls. I appreciated having standard steering wheel controls, and what’s more the audio system’s buttons and knobs made sense to me (often not the case).  Just the same, sound quality was only so-so. I would personally upgrade to the GT for that model’s amazing audio system, a nine-speaker 710-watt Rockford Fosgate Punch system with a 10-inch sub, digital processor, speed-compensated volume and equalization, but I’m a bit of an audiophile. Back to ES reality, I really liked the base model’s centre bin, which was great for organizing all my stuff.

There is also a storage bin hidden in the cargo area, which I would have geeky delight storing first aid and survival kits in. Just imagine the plastic rain ponchos and the emergency flares!! With the second row 60/40 seats folding almost flat, you have an ample 1,792 litres of emergency shelter… I mean cargo space. With the second row up it still holds 968 litres (still enough room for a large tent and a few days of dehydrated food and water supply!). If you decide to get a model with a third row, you’ll still be left with 292 litres of space in behind (tarps would be useful in an emergency). Ok enough of my geeky delight.

Turning to the exterior, there have been a lot of changes here as well. The front end received most of the attention, which goes from the 2013 model’s Lancer EVO-inspired shark’s gaping maw to a much more conservative design. Walking around to the back, I wish they’d change the new Outlander’s rear lights. They don’t appear small at first glance, but once I noticed that most of what I was seeing on the SUV’s rear end was a set of reflectors, I really started to question their size. This is a compact SUV, so the lights don’t need to be as elaborate as those on much larger vehicles. Instead I’d like to see lenses that are a bit more in proportion with the rest of the vehicle.

If I had to choose between fuel economy and performance, as I feel I’d need to do if purchasing the Outlander, it would be a tough call for me. I really do love to drive, but I also have a fairly heavy foot that makes my fuel costs soar. I also really love nature and try to do all I can to do right by it. Again, I’d be tempted to upgrade to the GT for the premium audio system, but then again I did enough damage to my hearing while wearing the aforementioned flannel and Birkenstocks with socks. Either way you choose, you’ll likely be well served. I have developed quite a fondness for Mitsubishi since they came to Canada, and I don’t have any inhibitions in recommending the Outlander.
©(Copyright Canadian Auto Press)
Car Shopping Tools