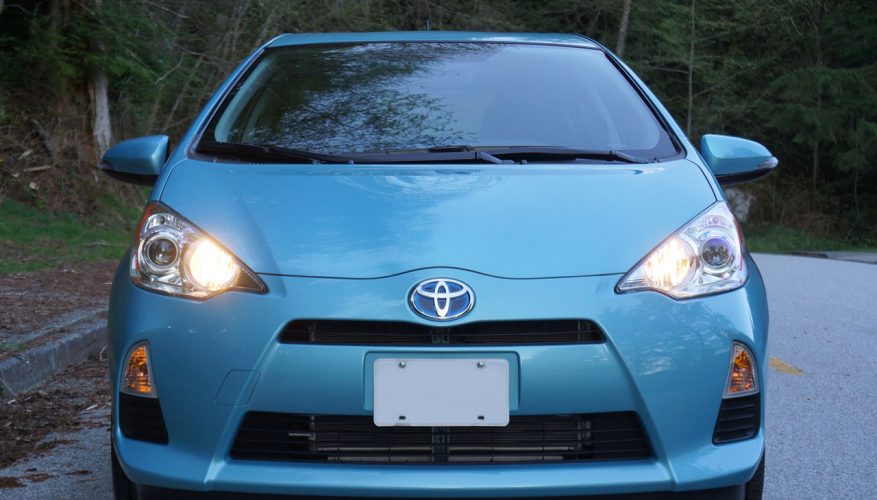 By: Trevor Hofmann
While some manufacturers are still debating whether or not to enter the gasoline-electric hybrid market at all, Toyota offers eight under its namesake brand alone. Six of these are available here in Canada, four of which wear the trusted Prius badge. The Prius C is the smallest, sharing underpinnings with the Yaris, or more specifically the Yaris Hybrid that isn’t offered here.

If you’ve never driven a Yaris, you’re in for a treat. Amongst the subcompact crowd the Yaris is one of the most entertaining to drive. Oddly enough, the Prius C is even more fun on a twisting road. I say oddly because hybrids from mainstream brands aren’t usually noted for driving enjoyment, but more so for fuel-efficient, environmentally responsible transportation. Certainly the Prius C is clean and thrifty, its 3.6 L/100km city, 4.0 highway and 3.8 combined Transport Canada estimated mileage some of the best claimed numbers for non-plug-in cars in Canada, all of which is expected of a model that’s smaller and lighter than its already fuel-friendly Prius brethren, as is its Super Ultra Low Emission Vehicle (SULEV) status, but its deft handling on winding roadways is the big surprise.

I took it on my usual road course where I’ve tested everything from the previous Yaris and ultimately sporty Scion FR-S to top-line Lexus’, Lotus’, Porsches, Lamborghinis and even a Bugatti Veyron, not the most efficient road car on the planet. Don’t worry, I’m not going to try and compare handling characteristics between these supercars and Toyota’s Prius C, but the little hybrid was nevertheless fun to pilot through this narrow ribbon of serpentine mountainside tarmac, with steering that was more direct than expected and a level of mid-corner stability that delighted as well. Likewise the C’s ABS-enhanced front disc/rear drum brakes are very responsive but not too grabby, a common problem resulting from battery-replenishing regenerative braking systems used in all hybrid models.

As for straight-line power, let’s just say the 1.5-litre Atkinson cycle four-cylinder doesn’t exactly snap your head back at takeoff, but the quick response of its 0.87kWh-fed nickel-metal hydride battery pack and 45-kilowatt electric motor, Toyota’s Hybrid Synergy Drive system combining for 99 net horsepower and 82 lb-ft of torque, makes the little car feel fast for the first few seconds. Like all Prius models, the C drives the front wheels via a CVT, a continuously variable transmission that was primarily designed for efficiency over performance. Nevertheless it serves its purpose well in the Prius C, putting more of the powertrain’s output to the ground than a conventional torque-converted automatic would due to much less internal friction. It’s all part of the Prius C’s primary objective, good clean fuel-efficient fun. My personal economy wasn’t as good as the claimed rating, but what other car can deliver a very real 4.7 L/100km combined average when driven at normal rates of acceleration at just-over-posted speeds on hilly terrain via city roads and highways? Very few.

One of the reasons why the Prius C is so efficient is its full-hybrid system; the way Toyota has been building hybrids since day one. Compared to mild hybrids a full-hybrid has the ability to drive solely on electric power for short distances, the C showing its results on a full-colour multi-information display that sits just to the right of the digital speedometer in the centre of the upper dash. There’s loads of interesting information available via this 3.5-inch LCD display, including the usual hybrid real-time energy flow animations, all just a thumb-flick away via the multi-functional steering wheel’s standard switchgear. The system showed that I was using full-electric EV mode for 30 percent of my driving, so it must have been switching back and forth automatically while in Eco mode without my knowledge. Toyota claims that the Prius C will drive in EV mode up to 40 km/h, but even when I pushed the EV Mode button to “lock” the drivetrain into electric only propulsion, as soon as 20 km/h arrived the engine would come on for extra power. I made sure the battery was almost fully charged when doing so, and babied it off the line on many occasions to test this function, but I never once was able to keep the car in EV mode during normal driving. I jokingly called the EV Mode switch a “placebo button” in my notes, but all this doesn’t really matter much in the end as the car’s fuel economy results still put a big grin on my face at the end of my week when it was time to fill up.

There were other things that made me smile about the Prius C too, such as its nicely kitted out cabin. In as-tested base trim its standard feature set includes remote keyless entry, power locks and windows, heated powered mirrors, automatic climate control with air filtration, a tilt and telescopic steering column, intermittent wipers, an intermittent rear wiper/washer, the aforementioned steering wheel-mounted climate, infotainment and audio controls, the latter connecting through to a four-speaker AM/FM/CD audio system with aux and USB inputs plus Bluetooth capability, as well as the multi-information display I spoke of earlier. Toyota’s usual full load of safety features come standard too, including previously mentioned ABS with electronic brakeforce distribution, brake assist, stability and traction control, plus LED rear brake lights and Smart Stop Technology (SST), which is a brake-override system that reduces engine power when the brake pedal is depressed. The usual assortment of airbags is also standard, plus one for the driver’s knees. All this clean thrifty living starts at $20,440 plus $1,620 for freight and dealer prep.

All of the above can be had when opting for Technology trim too, a $2,210 surcharge over the previous package. Additional equipment includes proximity sensing keyless entry with pushbutton ignition, touch tracer steering wheel controls, 15-inch alloy wheels circled by the same 175/65R15 tires the base model’s steel wheels are wrapped with, and the "technology" pièce de résistance, an infotainment system upgrade that includes SMS-to-speech and email-to-speech capability as well as advanced voice recognition, a digital phonebook and streaming audio via Bluetooth, display audio with artist, song and album artwork for a connected iPod, and navigation.

If the Prius C wasn’t already a wonderfully accommodating little car then none of this would matter, but like all Prius models it packs a lot more size inside than its outward dimensions suggest. The entire car is 3,995 mm long with a wheelbase measuring 2,550 mm, while it spans 1,695 mm from side-to-side and reaches 1,445 mm in height. This places it right in the middle of the subcompact segment, yet its interior roominess is better than average. Cargo capacity, which is often a hybrid tradeoff due to placement of battery packs (it’s under the rear passenger seat in the C), is a sizeable 481 litres, which makes it more utile than either the Yaris or Scion xB, the latter car also sharing its platform architecture with the Prius C. Not just to knock Toyota’s internal rivals, the C beats under-hatch volume in competitive subcompact hatchbacks too, such as the Ford Fiesta, Kia Rio, Mazda2, and others.

I’m also a fan of the Prius C’s styling. No one will mistake its streamlined shape for anything but a Prius, nor the car’s uniquely penned front fascia, highlighted by large multi-angled headlamp clusters positioned over a set of triangular fog lamps, its tall rear roofline and sporty clear taillight lenses inspired from its larger siblings, along with the familiar electric-blue Toyota logo on its grille, Hybrid badges on its front fenders and Hybrid Synergy Drive branding added to its hind end. The look appears pricier than most of its conventionally powered subcompact peers.

Likewise for the interior, with its two-tone light grey and near black motif, its tech-patterned electric blue gearshift knob the highlight for me. The Upgrade package’s premium fabric upholstered seats are really attractive too, with durable woven side bolsters in black and silvery-grey patterned inserts. The C doesn’t feature many soft-touch plastic surfaces, but all materials chosen are of high quality and fit together perfectly. The same goes for the switchgear, which includes large easy to use buttons and knobs, all simple and user-friendly.

Truly, there’s much to like about the 2014 Toyota Prius C over and above its fabulous fuel economy, and therefore it’s a car that I’ve recommended to those looking to save on fuel while still enjoying the art of driving. That it gets you where you’re going comfortably and allows you to arrive in style are bonuses that many looking into the subcompact category don’t expect.
©(Copyright Canadian Auto Press)
Car Shopping Tools