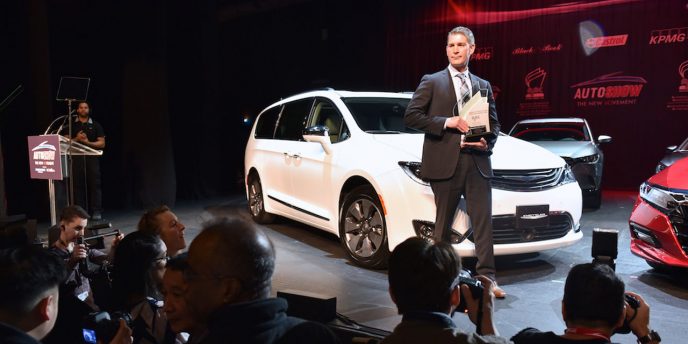 After taking home the award for Best Large Car in the Automobile Journalist Association of Canada’s annual Car and Truck of the Year program in January, beating the refreshed Mazda6 and thoroughly redesigned…

After taking home the award for Best Large Car in the Automobile Journalist Association of Canada’s annual Car and Truck of the Year program in January, beating the refreshed Mazda6 and thoroughly redesigned Toyota Camry in the process, the Accord has now been named 2018 Canadian Car of the Year.

“We’re thrilled to declare the Honda Accord to be the Canadian Car of the Year for 2018, and the Chrysler Pacifica to be the Canadian Utility Vehicle of the Year,” said AJAC President Mark Richardson. “They’ve both been decided through the most vigorous system of testing possible by AJAC’s automotive professionals. They’re both deserving of being considered the very best vehicles you can buy in 2018.”

The latter award might be the more important of the two, being that trucks, SUVs and vans now make up the majority of new vehicle sales in Canada. Of note, the Canadian-made Pacifica not only beat out its “Best Minivan” category competitors to earn the coveted award, but also scored higher than other category winners.

“There’s an extra air of significance when one of our homegrown products wins a domestic award,” said Reid Bigland, President and CEO, FCA Canada. “Chrysler Pacifica’s recognition as 2018’s Canadian Utility Vehicle of the Year reinforces its position as the most awarded minivan of the last two years, and provides important third-party validation for the exclusive suite of versatility, style, safety and technology that it brings to Canadians.”

The redesigned Accord also had its share of challengers, including the Volkswagen e-Golf that achieved “Best City Car” over the Hyundai Ioniq Electric and Nissan Micra, Mazda3 that earned “Best Small Car” over the Chevrolet Bolt EV and Hyundai Ioniq Hybrid/Electric Plus, Jaguar XE that took “Best Small Premium Car” honours over the Alfa Romeo Giulia and Infiniti Q60, Volvo S90/V90 that overcame the Genesis G80 and Lexus LC to win the “Best Large Premium Car” title, Volkswagen Golf R that won “Best Sports/Performance Car” over the Honda Civic Si and Honda Civic Type R, Jaguar F-Type that achieved “Best Premium Sports/Performance Car” over the Porsche 718 and Porsche 911, and finally the Mercedes-Benz SL that won “Best Convertible” over the Mazda MX-5 and Porsche 718 Boxster.

“We’re honoured and humbled to receive this recognition from a group of respected automotive journalists in Canada,” said Jean Marc Leclerc, Senior Vice President of Sales and Marketing at Honda Canada. “We’re both proud and thankful for all of our associates who supported the production and development of this vehicle and for our passionate customers who have supported the Accord for the past forty years.”

To qualify for entry a vehicle must be entirely new or significantly updated, and the winners were not only up against the challengers noted, but other offerings that didn’t make the “finalists” cut in December. 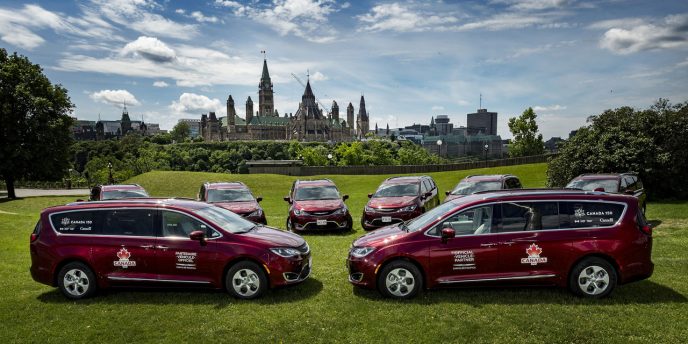 It’s only fitting that Canada’s favourite family shuttle was the official conveyance in our capital city for our 150th confederation celebrations. Fiat Chrysler Automobile’s ultra-popular Dodge…

It’s only fitting that Canada’s favourite family shuttle was the official conveyance in our capital city for our 150th confederation celebrations.

Fiat Chrysler Automobile’s ultra-popular Dodge Grand Caravan, dearly departing Chrysler Town & Country, and advanced new Chrysler Pacifica minivans combine for unsurpassed annual seven- to eight-passenger vehicle sales, having found almost twice as many Canadian buyers as all other minivans combined in calendar year 2016. In fact, if commercial vehicle sales were taken out of the overall equation, FCA’s minivans would have accounted for more business than almost any other vehicle line in Canada last year.

Canada’s most popular Ford F-150 and runner-up Honda Civic might have been appropriate official Canada Day 2017 vehicles for our July 1st weekend celebrations too, but for the purpose of conveying visitors around Ottawa, the fleet of 26 seven-seat Velvet Red Pearl-painted and “Canada 150” maple leaf decaled Chrysler Pacificas were much more useful.

It didn’t hurt matters that these vans were produced in FCA’s Windsor Assembly Plant in Windsor, Ontario; the result of 6,000 hourly workers on three full shifts.

The Windsor facility builds both the conventionally powered Pacifica as well as the Pacifica Hybrid, the former featuring the brand’s class-exclusive second-row “Stow ‘n Go” seating that fold completely into the floor when more cargo space is required, while the latter includes a plug-in hybrid electric powertrain capable of 53 kilometres of pure EV range, up to 911 kilometres of total range, and a five-cycle Transport Canada claimed fuel economy rating of 2.6 Le/100km in the city.

During the Canada Day weekend, Ottawa hosted a three-day festival in three venues including Parliament Hill, the Canadian Museum of History, and Major’s Hill Park.

“I can’t think of a more fitting vehicle than the Windsor, Ontario-built Chrysler Pacifica as the official vehicle of Canada Day 2017,” commented Bill Levasseur, VP, Sales and Marketing, FCA Canada. “Our Chrysler and Dodge minivans have been an integral part of millions of Canadian families’ lives over the years and we are honoured to have Chrysler Pacifica showcased in celebration of our nation’s milestone 150th birthday.”

Along with the fleet of vans shuttling event-goers from attraction to attraction, those in attendance were able to view 30-second video spots as part of the Major’s Hill event, plus FCA branding broadcasted on big screen displays at other event locations. 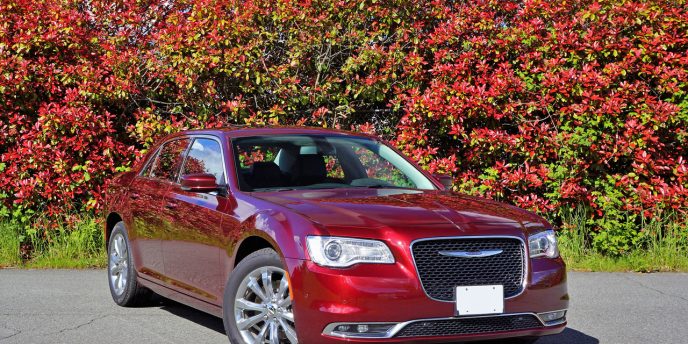 Possibly you’ve owned one and miss life with the big luxury sedan, or one that needs trading in is be parked in your driveway. Or maybe you’ve always wanted one but never partook; the Chrysler 300…
Have you ever noticed just how many Chrysler 300s proliferate our streets? It may not come as a surprise to find out the popular model outsells every mid- and full-size premium-branded luxury sedan in the U.S. and Canada, as well as all mainstream volume branded luxury four-doors, except its badge-engineered Dodge Charger cousin.

After being blown away by the concept during a private introduction held in a little theatre-style auditorium at the New York auto show in April of 2003, I've had the luxury (literally) of driving every single iteration since this LX-based 300 started rolling off the Brampton, Ontario line in mid-February 2004. Chrysler launched the car two weeks later in Palm Springs with yours truly and a gaggle of auto scribes in tow, all of which appeared thoroughly impressed by this game changing four-door. I was absolutely dumbfounded then, and even now, some 13 years and one generation later, I must admit to still being quite smitten by the big car. Of course, Read Full Story 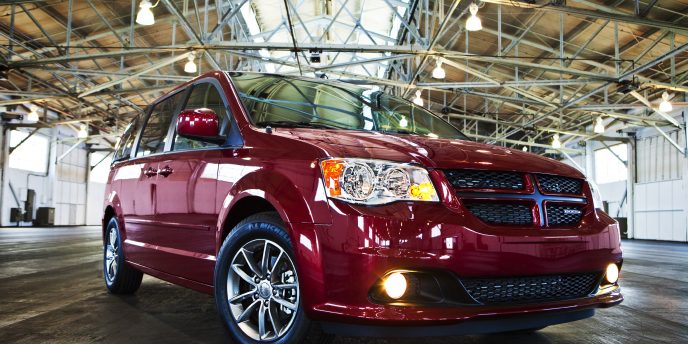 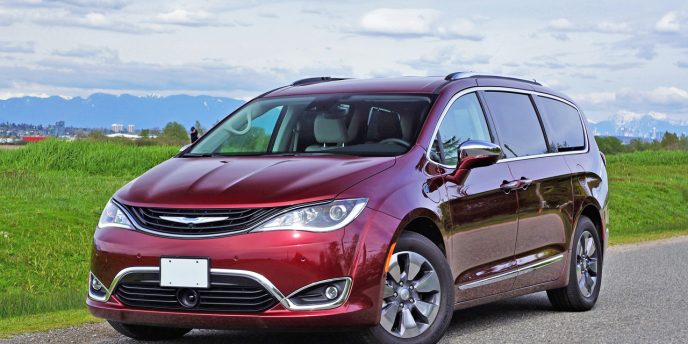 A plug-in hybrid minivan? That gets a claimed 2.6 Le/100km? That makes 287-hp? And as luxurious as most premium buyers could hope for with standard and optional features like proximity access, pushbutton…
In the mainstream volume auto sector only Daimler's Smart brand has fewer models than FCA's Chrysler. Chrysler has three. And next year it'll be down to two. Just how FCA allowed this to happen is anyone's guess outside of Auburn Hills, but at least the two models that will carry the Pentastar flag into 2018 are very good at what they do.

Case in point, the 300 is the perennial Canadian bestseller in both the mainstream full-size luxury sedan class and the mid-size premium E-segment (it arguably fits into either depending how you load it up). It obviously targets its audience very well. The Pacifica minivan hasn't been so fortunate thus far, and due to the slow take-rate of electrified vehicles this new plug-in variety even less so, but to Chrysler's credit the conventionally-powered model's sales have been growing since a new entry-level trim was introduced, and base pricing concurrently came down.