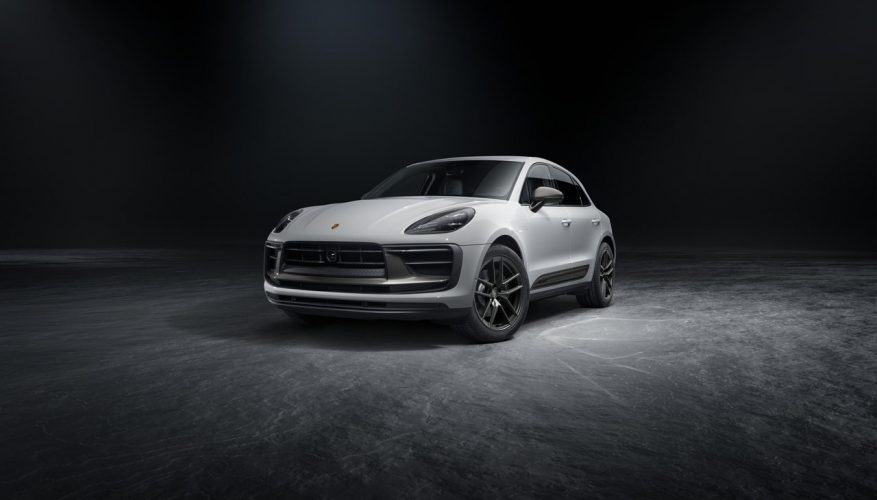 Porsche is adding a new “T” trim line to its most popular Macan model for 2023, and it looks to be an ideal combination of fuel-efficiency and agility.

The Macan, which was updated midway through 2021 for the current 2022 model year, gets refreshed exterior styling as well as an updated interior. Key details inside include a new centre stack and console, incorporating a 10.9-inch touchscreen filled with a fully-networked Porsche Communication Management (PCM) infotainment interface up top, plus a stylish glass-like interface with touch-sensitive switchgear below.

The new 2023 Macan T adds some nice exterior and interior design details such as Agate Grey metallic trim elements outside, specifically on the front fascia, mirror caps, side blades (which also include “Macan T” script), the rooftop spoiler, and the rear bumper cap, plus glossy black exterior window trim and exhaust pipes, as well as Dark Titanium 20-inch Macan S alloy wheels and the choice of 13 plain, metallic and special colours.

Up until now the “T” designation has never been used outside of Porsche’s 718 and 911 sports cars lines, and due to this the Macan T is the first Porsche with steel suspension components to bear the name, plus the first four-door model to do so. T, which stands for Touring in Porsche-speak, was originally used for the 1968 911 T, but now is a trim level that designates lightweight, affordable performance, particularly emphasizing handling dynamics.

To this end the new Macan T’s suspension is lowered by 15 mm and comes standard with Porsche Active Suspension Management (PASM), although take note that a further 10 mm drop can be achieved by opting for the brand’s adaptive air suspension. Porsche Traction Management (PTM) all-wheel drive is also standard, which is expected, but it receives more rear torque bias in the Macan T in order to improve at-the-limit cornering. Additional standard features include stiffer front anti-roll bars and specific chassis tuning that Porsche says is “the perfect suspension for the vehicle and powertrain.” Additionally, those opting for the Macan T’s available Porsche Torque Vectoring Plus system will find that it’s been further retuned to enhance performance through tight, fast-paced curves.

As part of its 2022 refresh, the base four-cylinder engine received a bump up from 248 horsepower to 261 hp, and 273 lb-ft of torque to 295 lb-ft, which translates into much stronger get-up-and-go. In fact, the model’s zero to 100 km/h sprint time has been reduced by 0.2 seconds, from 6.7 seconds to 6.5 in the new model, while base models upgraded with the Sport Chrono package see their sprint times drop from 6.4 seconds to 6.2. The Macan T comes standard with the Sport Chrono package, so it benefits from quicker acceleration, while its top track speed is limited to 232 km/h.

Along with the Sport Chrono package is a dash-top mounted stopwatch/lap timer, plus a convenient steering wheel-mounted Sport Response button that makes switching between drive modes quick and easy. This can be used to shorten the shift increments of its standard seven-speed dual-clutch automated Porsche’s Doppelkupplung (PDK) transmission, the latter standard across the entire Macan line.

Speaking of alternative Macan models, those wanting more straight-line performance can choose the revised 348-hp 2022 Macan S that hightails it from zero to 100 km/h in only 4.8 seconds, while the latest 434-hp Macan GTS blasts from standstill to the same speed in just 4.5 seconds, which incidentally was the previous Macan Turbo’s sprint time.

Macan T slots in between base Macan and Macan S trims

The Macan GTS costs a cool $85,500, by the way, which is fair value considering its performance and Porsche pedigree, while the Macan S will set owners back a much more affordable $70,600. The new Macan T will fit right in between the S and base model, the latter of which starts at just $58,500, plus it benefits from the four-cylinder engine’s considerably lower running costs when it comes to fuel-efficiency. Currently we only have the base model’s numbers of 12.2 L/100km in the city, 10.2 on the highway and 11.3 combined, but these shouldn’t change in its transition to T trim, whereas the 2022 Macan S is rated at 13.1 in the city, 9.6 on the highway and 11.5 combined, and GTS at 13.5 city, 10.5 highway and 12.2 combined.

Macan T pricing and detailed ordering info will be announced early this spring, but take note that all of the other models mentioned can currently be had with factory leasing and financing rates from zero percent. Check out CarCostCanada’s 2022 Porsche Macan Canada Prices page for more detailed info, plus the ability to price out each Macan trim including options on their configuration tool. CarCostCanada will also keep you apprised of any other manufacturer deals, like rebates, if you become a member, and you’ll always have access to dealer invoice pricing info, which can help you save thousands when negotiating your next new vehicle deal. In fact, CarCostCanada members are saving an average of $1,250 when purchasing the new Macan, impressive considering how tight inventories are these days, so be sure to check out how their system works and definitely download their free app from the Google Play store or Apple Store.