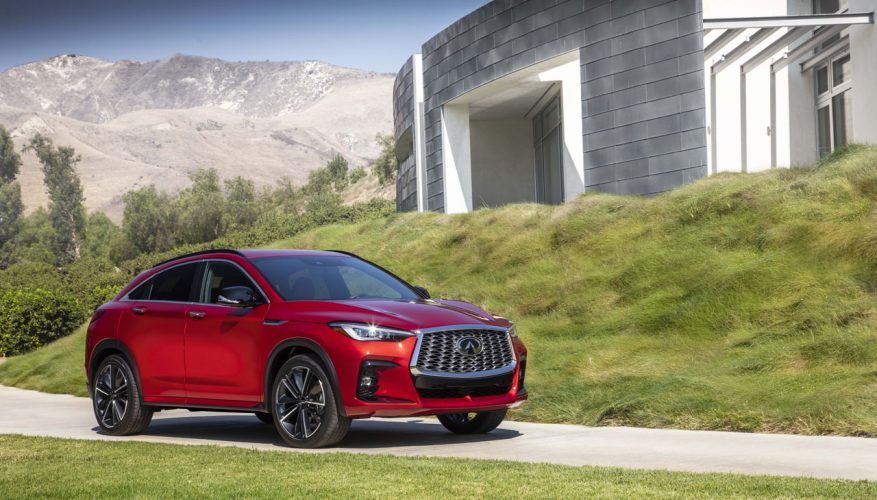 Infiniti could arguably be credited with creating the sporty crossover coupe sector way back in 2002 with the introduction of its mid-size FX35 and FX45. The performance-oriented V6- and V8-powered SUV, which would eventually receive the QX70 nameplate two years after the redesigned second-generation FX appeared in 2011, paved the way for a follow-up, so therefore the Japanese luxury brand will re-enter this surprisingly popular niche market segment with something altogether new based on its bestselling QX50 compact luxury SUV.

The appropriately named QX55 makes perfect sense for those who want something sportier than the more upright, family-oriented Q50, or for that matter one of the brand’s even more utilitarian mid-size or full-size SUVs, yet still need greater functionality than a Q50 sedan or Q60 sports coupe can provide. The idea is to combine coupe-like styling and SUV practicality into one, with the compromise being a bit less rear seat headroom and reduced cargo volume for a more aesthetically pleasing design.

The latter measurement drops 134 litres from QX50 to QX55, resulting in 761 litres in the new crossover coupe compared to 895 in the regular SUV. Of note, dedicated cargo space can be increased by sliding the rear seats forward, but versatility is lessened by only having 60/40-split rear seatbacks, compared to all rivals that feature the more convenient 40/20/40 configuration, so that long items, such as skis, can be placed down the middle.

Those rivals include some well-established contenders, like BMW’s X4 that was the compact SUV segment initiator way back in 2014, followed four years later by Mercedes-Benz’ GLC Coupe that arrived for 2018. Audi’s Q5 Sportback is new for 2021, and now Infiniti becomes the first non-German brand to drive down this charted, albeit less known road.

Some might include Alfa Romeo’s Stelvio, Jaguar’s F-Pace, Range Rover’s Velar, Porsche’s Macan or Tesla’s Model Y in this category due to their sleek shapes and strong performance, but they’re the only compact models offered by their respective brands and provide similar passenger and cargo capacities to more conventional segment rivals, so probably not. We’ll give them honourable mentions just the same, while Genesis’ upcoming GV70 will occupy similar compact luxury SUV territory for the same reasoning.

As far as styling goes, the new QX55 is arguably the best-looking crossover in Infiniti’s lineup, providing a big, bold interpretation of Infiniti’s double-arched grille up front, bookended by a standard set of slender LED headlights that the luxury brand says “mimic the human eye.” Each hover over a gloss-black fog lamp bezel that mimics the appearance of a brake cooling duct, while juxtaposing the grille’s classy character with a more aggressive attitude.

Following the QX55’s muscular flanks and arching roofline rearward, which flow into an abbreviated deck lid, the latter dubbed a “fresh interpretation of the FX silhouette” by Infiniti, results in a tidy back end highlighted by sharply penned “piano key” style taillights infused with 45 separate LEDs for a veritable light show at night. De rigueur matte black cladding trims off the SUV’s lower extremities from the front wheel arches rearward, although it sweeps upwards on the back bumper to outline a body-colour diffuser-style panel filled with a matching set of chromed rectangular tailpipes. It’s an eye-catching design that should find favour from those wanting something a bit more daring from a manufacturer known to be more reliable than its German peers.

Under the sculpted hood is the same variable-compression 2.0-litre turbo-four found in the QX50, in which it makes a generous 268 horsepower and 280 lb-ft of torque. It comes mated to a continuously variable transmission (CVT) with steering wheel-mounted paddle shifters, which while highly efficient and dependable, is never a performance enthusiast’s first pick, so therefore a future road test will be required in order to learn if improvements have been made since the QX50 was reviewed on these pages. All-wheel drive will be standard in Canada, with fuel economy most likely near the same as the QX50’s estimated rating of 10.8 L/100km in the city, 8.3 on the highway and 9.7 combined.

Similar to the powertrain, the QX55’s interior doesn’t deviate from its taller sibling, other than the top-line Sensory trimmed model’s lack of top-tier quilted leather upholstery. Appearing to be going for a sportier cabin design, an optional two-tone Monaco Red and Graphite black motif gets joined by yet more red on the centre stack and lower console, this really highlighting the unique form of this tech-filled cabin divider. The swath of bright colour is offset by dark grey, open-pore wood inlays on the dash and doors as well, these sections butting up against satin-finish aluminum trim that joins yet more nicely finished metal throughout the interior.

Infiniti’s InTouch eight- and seven-inch, upper and lower dual digital display design is once again front and centre, sharply contrasting the majority of premium players that house their screens on separate fixed tablet-like protrusions from the dash top. While more traditional, this option allows for touch capacitive use along with smartphone-style tap, swipe and pinch finger gestures, while separate controls can be found on the steering wheel. The QX55 will come standard with all the expected infotainment functions, including Apple CarPlay, Android Auto, and 4G LTE wi-fi connectivity for up to seven devices.

The new QX55 is certainly up against some serious competition, particularly because its Infiniti brand name doesn’t quite have the same cachet as Audi, BMW or Mercedes-Benz. Still, it offers similar levels of styling, luxury, technology and performance as its three competitors’ entry-level crossover coupes, while the new model’s value proposition should be attractive to those on more of a budget.

Speaking of saving money, CarCostCanada has yet to add a QX55 page to its near complete selection of new Canadian cars, vans, trucks and SUVs (one will soon be published), but take note that Infiniti is currently offering up to $3,000 in additional incentives for 2021 Q50 buyers, and up to $3,500 off of 2020 models, although CarCostCanada members save an average of $5,750 no matter the model year. Learn more about how you can save thousands when purchasing your next vehicle by becoming a CarCostCanada member, and make sure to download the free CarCostCanada app as well, so you can take advantage of the latest manufacturer rebates, factory financing and leasing deals, plus dealer invoice pricing that can make a massive difference when negotiation your best deal.

Additionally, be sure to check out our full 2022 Infiniti QX55 photo gallery above, plus enjoy the following video as well (showing the new QX55 speeding away from an original FX, which would easily be possible if only an FX35).