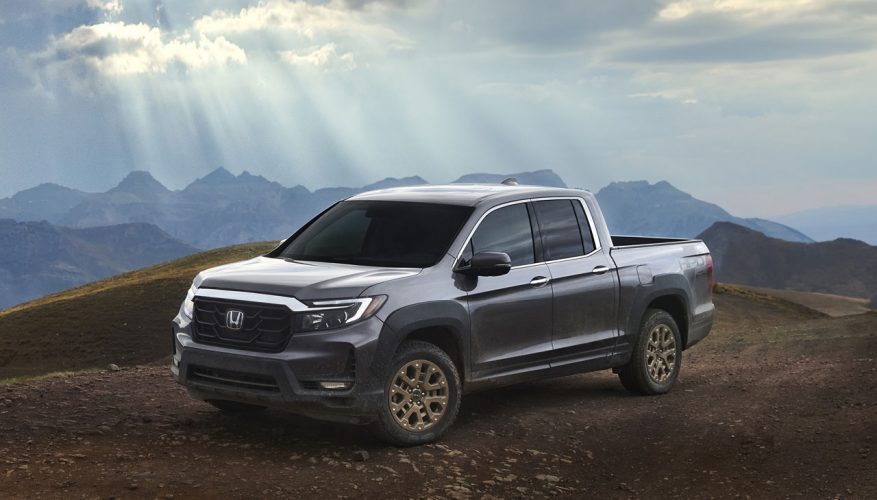 When the second-generation Ridgeline arrived on the scene for the 2017 model year, we lauded its drivability, refinement, and creature comforts, but weren’t exactly wowed by its styling. It looked ok, but lacked a certain visual ruggedness necessary for luring in truck buyers in large numbers. Honda appears to be ready to deal with that problem for 2021, thanks to renewed styling that toughens up the mid-size model’s exterior design.

Gone is the Ridgeline’s smooth, wind-cheating grille and sloping hood, replaced by a much bolder, more upright grille and broader, flatter hood with a centre power bulge. This is combined with a more rugged looking lower front fascia and redesigned front fenders, all combining for a truck that looks as capable as the Ridgeline really is.

Changes to the new Ridgeline’s flanks and rear design are much less pronounced, with the former painting the cab’s rearmost extension a stylish black instead of body colour, and the rear bumper losing any chrome embellishment.

The more visually appealing 2021 Ridgeline will go on sale across Canada tomorrow, January 15, starting at $44,355 plus freight and fees for the Ridgeline Sport with standard AWD, while other trims include the Ridgeline EX-L at $47,355, Ridgeline Touring at $51,555, and Ridgeline Black Edition at $53,055. It will start arriving in Canadian dealerships in the beginning of February.

Take note that CarCostCanada is reporting up to $1,000 in additional incentives for the outgoing 2020 model, which already has a $1,650 lower MSRP, so if you want to save on the old version now’s the time to take action (find out about all of CarCostCanada’s other benefits too, plus download their free app while you’re at it).

Before you do, be aware that the new grille and other styling enhancements aren’t the only changes made to the 2021 model. The new Ridgeline also benefits from new, brighter LED low beam headlamps with reflector beam halogen high beams, while new more aggressive 18-inch wheels wrapped in new more rugged looking tires join a 20-mm wider track in giving the updated truck greater visual breadth.

The Ridgeline’s interior needed little to make it more welcoming, but nevertheless Honda fitted the centre stack with a revised infotainment touchscreen featuring a real volume knob for quick, easy audio adjustment. With a focus more on style than functionality, all 2021 Ridgeline trims get contrast stitching for the seats, while Sport trims get new fabric seat inserts, and Sport, EX-L and Touring trims add new dash, steering wheel and centre console trim accents. Everything else about the cabin remains the same, including its spacious rear passenger compartment with a flat floor and foldaway 60/40-split rear lower seat cushions.

The Ridgeline’s power unit continues into 2021 unchanged too, the 3.5-litre direct-injected V6 producing up to 280 horsepower and 262 lb-ft of torque, while its standard nine-speed automatic transmission makes sure fuel economy remains the truck’s trump card, with all trims claiming 12.8 L/100km in the city, 9.9 on the highway and 11.5 combined.

As mentioned earlier, Honda’s i-VTM4 torque-vectoring all-wheel drive is standard, as is its ability to send up to 70 percent of the engine’s twist to the rear wheels when needed, while continuously apportioning up to 100 percent of that torque between left and right rear wheels depending on slip. The Ridgeline’s standard Intelligent Traction Dynamics System enhances power delivery further by attributing engine torque to the wheel with the most traction, whether overcoming wet, snowy, muddy, or sandy conditions.

The Ridgeline also does well in U.S. collision safety ratings, with strong National Highway Traffic Safety Administration (NHTSA) and Insurance Institute for Highway Safety (IIHS) ratings, achieving a “GOOD” rating in all IIHS collision tests, and a “SUPERIOR” IIHS rating for frontal crash prevention, while it gets a 5-star Overall Vehicle Score in the European NCAP system.

When checking out the photo gallery above you’ll see the Ridgeline hauling Honda dirt bikes and towing one of the Japanese brand’s ATVs, which should be a good indication this truck can do more than merely out-handle its competition on paved roads. Like the outgoing model, the 2021 Ridgeline can manage up to 1,571 lbs (713 kg) on top of its trunk-infused bed, and gets a 5,000 lb (2,267 kg) trailer rating.

On this note, a friendly reminder to remove the spare tire from the trunk before hauling heavy loads that can’t be removed onto highway shoulder lanes, such as bark mulch or building materials, as it will be inaccessible if you get a flat (and flat tires occur more often when a truck is loaded).

Other than this inconvenience, offset by the convenience of having a lockable trunk embedded under the cargo floor in the first place, the new 2021 Honda Ridgeline looks like a winner.