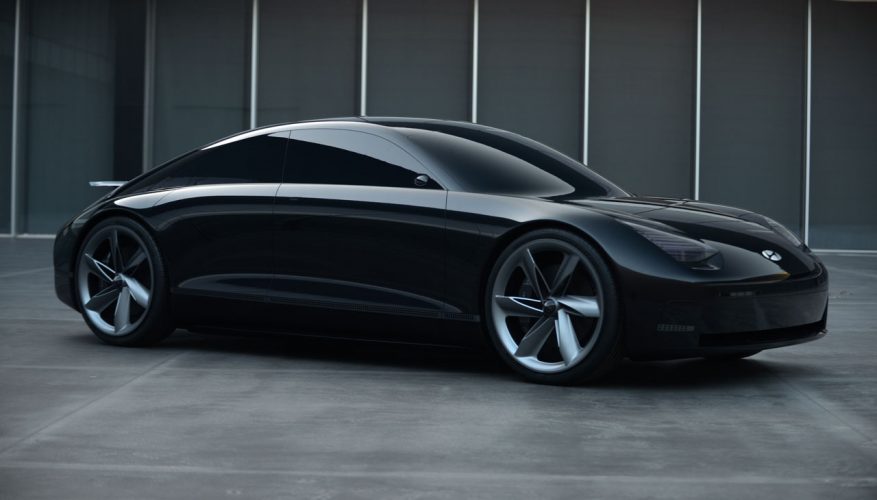 The new autonomously driven Prophecy Concept EV from Hyundai is about as minimalist as four-wheeled conveyances come, that is until inspecting the details. The brand’s upcoming Optimistic Futurism design language has been designed to connect people more fully with their cars, or so said the head of Hyundai’s global design centre SangYup Lee in the vehicle’s press release.

“We have brought to life yet another icon that establishes a new standard for the EV segment as well as pushing Hyundai’s design vision to even broader horizons,” said Lee. “A part of that expansion is what we call Optimistic Futurism, a design concept embodied by ‘Prophecy’. With Optimistic Futurism, our aim is to forge an emotional connection between humans and automobiles.”

Of course, creating emotional ties between consumers and their products should be a key priority of all brands, and to that end Hyundai has a pretty good chance of doing so with the Prophecy. The South Korean company, which sometimes seems to be playing a game of design tug of war between the overly conservative and overtly dramatic, the various generations of its Sonata mid-size sedan making this abundantly clear (seen at CarCostCanada in its stunning new 2020 design, somewhat less emotive 2019 version, even more sedate 2015 variant, and swoopy 2014 design), has pulled off a design with the Prophecy that’s at once minimalist in its retrospective shape and simultaneously a wonder of unique intricacies.

Its curvaceous styling could’ve easily been conjured up by Porsche for its next-generation Panamera or the new Taycan, not that it looks like either, but few brands dare attempt to shape a car with as many rounded edges, let alone a grille-less front end, not dissimilar to Tesla’s Model 3. Then again its seemingly vented rear quarters, which pull eyeballs away from the otherwise large transparent acrylic whale tail-like rear wing, appear to pay homage to Preston Tucker’s ultra-aerodynamic (for its era) post-war 48, although protruding from this otherwise pixelated 3D panel are LEDs for the taillights. Hyundai has done something similar up front, but as part of a more traditional set of headlamp clusters that utilize the same transparent acrylic as the rear spoiler and in the camera monitoring system.

Of course, all of the above aid aerodynamics, which is why others have chosen variations on the Prophecy’s theme, Hyundai even going so far to create propeller-inspired wheels that direct air down each body side.

No exterior or interior dimensions have been released, but it appears to sit in the mid-size sweet spot, while technical specifications aren’t available either, but of course with “EV” in the name it’s obviously 100-percent electric. Hyundai has told us the Prophecy’s battery is located below the passenger compartment, so expect it to ride on a completely new “skateboard” architecture that would allow for multiple body styles to reside on top.

The Prophecy’s cabin is easy to see through its four clamshell doors, its four seating positions separated into deeply sculpted buckets providing what appears to be just enough legroom in back. A unique tartan upholstery design is another nod to Porsche’s 911, 924 and 928 models from 1975 through 1980, blue-green a popular colour combo in the day, but nothing the German performance brand ever did back then achieved the built-in wow factor that Hyundai’s new creation does, and not just because the Koreans use the Scottish pattern for the bolsters as well as the centre inserts.

Even the Prophecy’s massive wraparound digital display that frames the windshield’s base isn’t all that radical these days, although the pop-up driver’s instruments are pretty slick, but even still these can’t steal the thunder from the car’s driving controls. You may have noticed its lack of steering wheel, this seemingly irreplaceable tool having been swapped out for a pair of pivoting joysticks. Why not, especially in a car that’s designed to be capable of full self-driving.

Will we ever see a Prophecy on the road? Unless it’s this single example being transported to the next auto show, when that ever happens (the Geneva auto show it would’ve been unveiled at cancelled due to the novel coronavirus, or COVID-19), this new concept exists to show prospective Hyundai buyers its future styling direction, and to that end it looks like the brand’s design department has things well in hand.