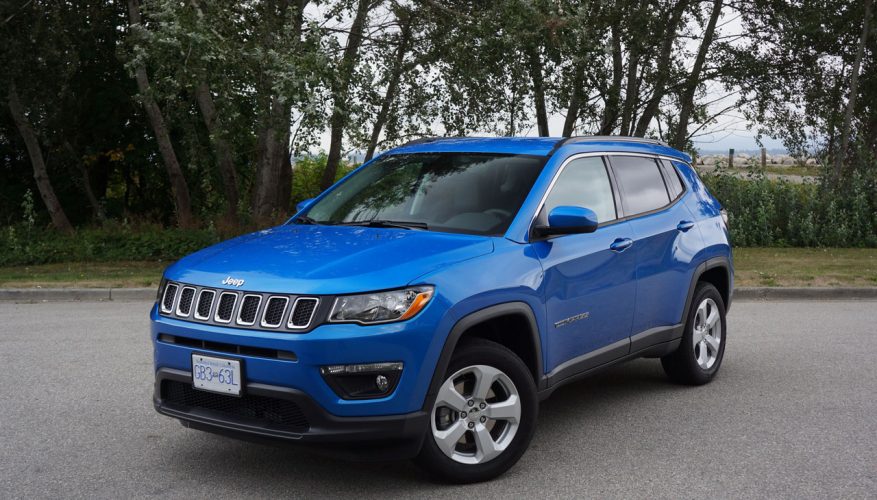 When I first heard Jeep was about to can the Patriot and keep the Compass I was a bit put off. It’s not like I particularly loved the Patriot, but it was a helluvalot more appealing than the first-generation Compass, at least to my eyes, plus it offered some mild capability off-road. Despite my silent petition Jeep followed through on this rumour and the Patriot was discontinued in 2017, but fortunately Jeep gave the Compass a completely new life that same year for the 2018 model, transforming it from a slightly better looking version of the initial ugly duckling, into something really quite fetching.

Believe it or not, the first-gen Compass ran for 10 years, from 2006 to 2016, with only one significant facelift in 2011. That’s when Jeep turned it from a Liberty wannabe to a mini Grand Cherokee, at least from the front, while the totally new second-generation Compass pulls even more cues from the since-updated and much more handsome Grand Cherokee, resulting in a really smart looking compact crossover SUV front to back. On that note I can’t go without mentioning rear end styling similarities to the all-new Volvo XC40, but to be fair to Jeep this shapely domestic came on the scene a full year before the new entry-level Sino-Swede, so maybe it was Jeep that influenced Volvo.

It wouldn’t be the first time Jeep made an impression on a luxury brand. Anyone who thinks the Mercedes-Benz Gelandewagen (G-Class) merely landed on the scene in ‘79 without any homage paid to Jeep’s iconic CJ/Wrangler (plus Land Rover’s Series I/II/III/Defender and Toyota’s Land Cruiser J40/70) is dreaming, and let me tell you that this Compass not only offers premium styling, but does a pretty good job of aping a compact luxury utility as well.

You’d need to step up from this second-rung North example to Trailhawk, Limited or High Altitude trim in order to feel truly pampered, although this just-over-base model is still very nicely finished inside. It gets a soft-touch dash that wraps all the way around the instrument panel and under the infotainment head unit before stretching across each front door upper. The door inserts are made from supple padded leatherette, similar to the armrests that also get nice cream and copper dual-tone contrast stitching to match the leather-wrapped steering wheel rim, shifter boot, and seat upholstery.

Those seats are bolstered in leatherette with attractive hexagonal-patterned black cloth inserts, and are very comfortable thanks to good inherent design as well as four-way powered lumbar support. Yes, four-way lumbar; a feature many premium brands don’t offer until moving up through their options lists.

The Compass switchgear is all high in quality too, with the standard dual-zone automatic HVAC system’s main dials rimmed in chrome and rubber, while Jeep provides a separate climate control interface within the centre touchscreen that lets you swipe up and down to easily set the temperature, not to mention adjust temperatures of the two-way front seat heaters and ultra-hot heatable steering wheel.

The infotainment system does much more, with really diverse entertainment choices from the usual radio selections to HD and satellite radio plus Bluetooth streaming audio, as well as navigation with accurate route guidance and really detailed mapping, Apple CarPlay and Android Auto smartphone integration, a nice big reverse camera with active guidelines, and more.

You can also replace the standard quad-halogen headlamps with a set of bi-xenon HID headlamps featuring LED signatures and LED taillights, add a set of 18-inch alloys on 225/55 all-seasons, upgrade the audio system with Alpine speakers, add a dual-pane panoramic sunroof and powered liftgate, and finally improve convenience and safety with a host of advanced driver assist systems such as adaptive cruise control with stop and go, automatic high beams, forward collision warning with active braking, advanced brake assist, and lane departure warning with lane keep assist, and that’s just with North trim.

No matter the trim the Compass is roomy for what is effectively a subcompact SUV, with plenty of space up front, loads of driver’s seat adjustability, and excellent telescopic steering column reach resulting in an ideal driving position, plus there’s more headroom than you’ll likely ever need. After setting my driver’s seat up for my rather long-legged, short-torso five-foot-eight frame, causing me to power it further rearward than most people my height need to, I still had about six inches ahead of my knees when seated directly behind in the second row, plus four inches over my head, and another four next to my hips and shoulders, while Jeep provides a nice wide armrest at centre. The outboard seats are comfortable with good lower back support, and the previously noted rear seat amenities, which also included good air circulation via vents on the backside of the front console, helped to make for a relaxing atmosphere.

The cargo compartment gets the usual carpeting on the floor and seatbacks, four chromed tie-down hooks, and the usual standard 60/40 split-folding rear seatbacks to expand it from an accommodating 770 litres (27.2 cubic feet) to a generous 1,693 litres (39.8 cu ft). These numbers show this new Compass to be 127 litres (4.5 cu ft) larger than old first-generation version with the seats upright, and 82 litres (2.9 cu ft) smaller when they’re folded flat, a nominal difference likely due to the previous model having more space behind the driver’s side rear wheel well, but usable space is about the same.

Comfortably positioned back up front in the driver’s seat, there are no Eco or Sport modes to get the most mileage or performance from the standard 2.4-litre Tigershark MultiAir four-cylinder engine, or its three drivetrains. The engine makes a healthy 180 horsepower and 175 lb-ft of torque, good for the subcompact SUV class, while fuel economy depends on whether suited up with the base front-wheel drive, six-speed manual gearbox combination (10.4 L/100km city, 7.3 highway and 9.0 combined), front-wheel drive with the six-speed auto (10.6 city, 7.6 highway and 9.3 combined), which also comes with auto stop/start that automatically shuts the engine off when it would otherwise be idling, or the four-wheel drive, nine-speed auto combo (10.8 city, 7.8 highway and 9.5 combined) that comes with idle stop/start too. Only Sport trim offers the manual, with Sport, North and Altitude trims providing the option of front-wheel drive with the six-speed auto, while all trims can be had with the 4WD, nine-speed configuration, which is standard on Upland models and above.

My Compass tester was great fun to drive, much thanks to steering wheel-mounted paddles. It was quick at takeoff, the little turbo-four delivering plenty of torque for a good smack in the backside during takeoff and no shortage of energy to speedily eclipse highway cruising limits. High-speed stability and fast-paced handling are good too, while the Compass’ ride quality is hardly upset by road imperfections. The Compass’ suspension is fully independent, and interestingly it incorporates rear struts in place of this compact SUV segment’s usual trailing arm or multi-link setup in order to provide more travel to improve off-road capability.

And yes, the Compass is fairly decent off-road. Jeep’s Selec-Terrain system is standard, which provides Auto, Snow, Sand and Mud modes, the latter one extremely useful when getting it dirty at a local off-road haunt. Certainly the Trailhawk’s lifted suspension and beefier tires would’ve made it even more confidence inspiring, but I was able to crawl over some reasonably difficult medium-duty terrain, wade through a few big mud puddles, and bring it back in one piece.

The Compass’ Achilles heel is its advanced nine-speed transmission, which while smooth and refined in its higher ratios, plus includes a sporty rev-matching feature, was often plagued with jerky starts from standstill, seemingly caused by a slight hesitation upon pressing the gas pedal that resulted in an uncomfortable slap in the back affect and distinct clunk on takeoff. Worse, this is the only vehicle to ever stall on me when in idle stop/start mode. While waiting at a light with the engine automatically turned off, the light went green, so I took my foot off the brake and, when nothing happened, feathered the throttle in order to get things going. Instead, the engine tried to start up and then died, stalling in Drive. After figuring out what had happened, returning my foot to the brake, shifting the transmission back into Park, pushing the start button, shifting it back into Drive, and then waiting for a very long time (as if the transmission was slipping) before it clunked into gear and started going again, I wasn’t at all amused. After all, there was a line of (fortunately patient) traffic behind me, looking at this poor sod that obviously didn’t know how to drive.

As I’ve since learned, Jeep’s ZF-sourced nine-speed transmission has caused problems for the brand in this Compass and other vehicles (particularly the Cherokee) going back years, and the description of my specific problem doesn’t come close to describing all of the issues that might potentially go wrong. This particular problem still appears to be happening with some customers, as noted by multiple complainants on the U.S. NHTSA website.

It’s such a shame to leave things on a sour note, because I really like this SUV in most every other respect. It looks great, has an impressive interior that’s packed full of features, is priced reasonably well, provides loads of practicality, and is fun to drive (when it’s not stalling and the transmission isn’t clunking). I could recommend it in front-wheel drive trims, but I’d want to test a couple of other examples with the all-wheel drivetrain and nine-speed automatic before recommending anything higher up the food chain.