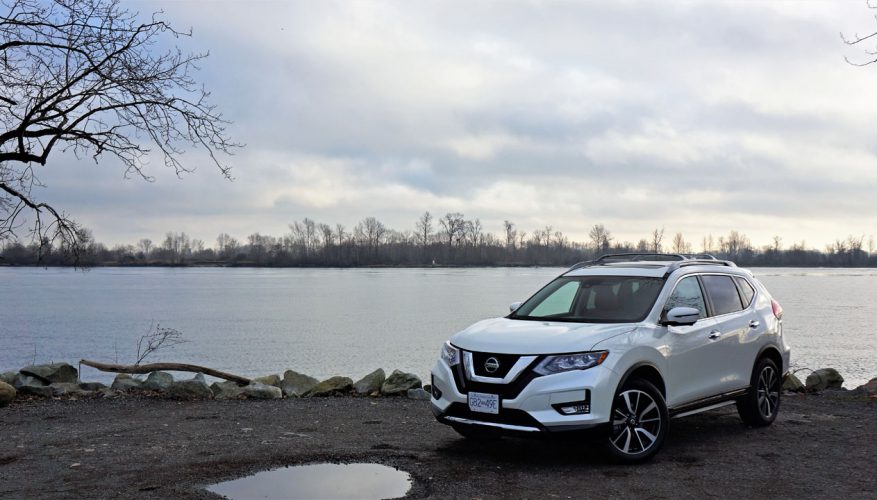 It’s déjà vu all over again, or at least that’s how I felt when picking up my 2019 Nissan Rogue SL Platinum AWD tester. I’d spent a week with an identical model less than a year prior; even down to its top-line trim level and most popular Pearl White paint.

Then I got inside, however, and was reminded of a near identical model I test drove the year prior in lovely Scarlet Ember livery, and therefore also remembered that last year’s SL Platinum wasn’t fully loaded, missing this SUV’s $500 SL Platinum Reserve Interior Package that includes a stylish stitched leatherette dash pad and replaces the regular Charcoal black or Almond beige leather upholstery with special quilted leather in an even richer looking Premium Tan hue, which comes across more like caramel or saddle brown. Either way it looks great, and ideally complements the white exterior paint, although the upgrade package is no longer available with the special metallic red exterior paint, or for that matter Nissan’s beautiful Caspian Blue. A shame.

Not to start this review out on a negative, because there’s very little to fault this popular compact crossover SUV on. As noted, the Rogue is Nissan Canada’s most popular model, and one look should make it easy to understand why. It was refreshed for the 2017 model year with Nissan’s wider, more U-shaped Vmotion 2.0 grille that I happen to like a lot more than the original V, while its then-new quad-beam headlamps with LED daytime running lights, and its updated LED brake lights added premium-level sophistication to the design.

That face-lifted 2017 model included additional styling tweaks on the outside plus updates within, a personal favourite being its flat-bottom steering wheel that still makes a sporty statement in the otherwise elegantly appointed top-line 2019 Rogue SL Platinum Reserve model. So equipped, that steering wheel is leather-wrapped with a heatable rim, a much appreciated mid-winter feature, as are the Quick Comfort heated front seats that come standard across the entire Rogue line, albeit the Platinum’s perforated leather upholstery is exclusive to this model.

There’s actually more to the SL Platinum Reserve Interior’s seat design than quilting and the caramel colour change. The quilting is only used for the centre inserts, with perforated leather added to the inner bolsters and contrast-stitched black leather on top of those bolsters for a little more of a sport look mixed in with the luxury. The seats’ upholstery is complemented by the same Premium Tan on the door armrests, centre armrest, padded knee protectors on each side of the lower centre console, and even the aforementioned dash facing, which incorporates a similarly classy looking stitched leatherette pad ahead of the front passenger.

As you may have guessed, the latest Rogue SL Platinum Reserve doesn’t just look like a premium crossover SUV, but in addition its standard feature set is replete with top-drawer gear that one-ups plenty of luxury brands. For instance, the official name given to this trim level is Rogue SL Platinum with ProPilot Assist, the latter technology standard with all SL Platinum models and really quite impressive. It’s a semi-autonomous “hands-on-wheel” driving system, which means it has the ability to completely drive itself, but due to safety concerns only lets you remove your hands from the steering wheel for about eight seconds at a time—it warns you to put your hands back on the wheel after that. Still, it’ll impress your friends and might be useful to those who find highway driving intimidating, as it helps keep the Rogue centered within its lane and, along with its Lane Departure Warning (LDW) and Intelligent Lane Intervention systems, may even help avoid an accident.

Along with all the usual active and passive safety features, some advanced tech incorporated into upper trims from the base Rogue S include Tire Pressure Monitoring System (TPMS) with a display showing individual tire pressures and an Easy-Fill Tire Alert, Intelligent Forward Collision Warning (FCW), Intelligent Emergency Braking (IEB), plus two features normally relegated to top-line trims, Blind Spot Warning (BSW) with Rear Cross Traffic Alert (RCTA), while Rear Door Alert is an oddly named albeit very welcome feature that actually warns against leaving something or someone in the back seat unattended after turning off the engine, by remembering that you opened a rear door before setting off on your drive. Now that’s smart.

As cool as some of this tech is, especially watching the Rogue drive itself, applying hands to said wheel while on the highway, and then winding through some twisting backroads after tooling through town is my usual course of action. As always the Rogue didn’t disappoint, but let me insert a caveat here, I’ve never set my performance expectations too high. This is an SUV built primarily for comfort rather than all-out speed, and to that end it delivers in spades, with a nice compliant ride, smooth, progressive acceleration, and an easy, controlled demeanor on the open freeway. It can manage curves too, and provides strong braking when needed, but if you’re looking for performance there are sportier SUVs in this class, yet few are smoother than the Rogue, such refinement its specialty.

Behind that V-motion grille is the Nissan’s dependable 2.5-litre four-cylinder engine, which continues to make a totally acceptable if not breathtaking 170 horsepower and 175 lb-ft of torque, while its standard continuously variable transmission (CVT) is one of the reasons behind that just noted smooth factor. It’s also partially responsible for the Rogue’s commendable Transport Canada fuel economy rating that comes in at 9.6 L/100km in the city, 7.5 on the highway and 8.7 combined with its as-tested all-wheel drivetrain, or 9.1 city, 7.1 highway and 8.2 combined when opting for front-wheel drive.

As is mostly the case in this class, all-wheel drive is more about tackling slippery pavement than anything off-road, although traveling to campsites over logging roads or light-duty trails can benefit from AWD, as well as its various electronic all-weather features, such as Vehicle Dynamic Control (VDC) with Traction Control System (TCS). This said others in the class are starting to broaden their appeal, with the latest RAV4 Trail featuring some real 4×4-like go-anywhere technologies, and the Subaru Forester long offering its X-Mode for extracting itself from rougher situations.

Back to earth, or rather asphalt, the Rogue is ideal for slogging through Canadian winters, hitting the slopes, or alternatively heading out on that summer camping vacation. It can tow a small camp trailer or lightweight boat weighing up to 500 kilos (1,100 lbs), plus it can carry plenty of gear in back, up to 1,112 litres (39.3 cubic feet) in the dedicated cargo area and 1,982 litres (70.0 cubic feet) when its 60/40-split rear seatbacks are folded flat. That rear bench is made more passenger and cargo friendly via a centre pass-through that doubles as a centre armrest with cupholders, which allows longer items like skis to be stuffed down the middle while rear passengers enjoy the benefit of the window seats, although take note they might be grumbling on the way back from the ski hill due to a surprising lack of available rear seat heaters.

I won’t tire you by scrolling through lists of everything that gets pulled up to SL Platinum trim from the other two grades, but some highlights from both include remote engine start, proximity-sensing access with pushbutton ignition, auto on/off headlights, fog lamps, LED turn signals within the side mirror caps, roof rails, the aforementioned six-way powered driver’s seat with power lumbar, a retractable cargo cover and more with the $29,098 SV, plus variable intermittent wipers, overhead LED map lights and sunglasses storage, a colour multi-information display, a 7.0-inch centre touchscreen, NissanConnect featuring Apple CarPlay and Android Auto, SiriusXM Traffic, hands-free text messaging assistant, Bluetooth, mood lighting, and more with the $26,798 base Rogue S. By the way, all pricing was sourced from CarCostCanada, where all the trims, packages and individual features are itemized, plus otherwise hard to find rebate info and dealer invoice pricing is provided.

For the most part our 2019 Rogue SL Platinum Reserve was well equipped, especially when it came to advanced driver assistance systems, plus it provided more than enough performance, a smooth, quiet ride, great fuel economy, and a fairly luxurious and comfortable cabin, while it was extremely accommodating for driver, passengers and cargo. I like the way it looks, especially as my tester was kitted out, which, along with all of the above, is likely why it’s such a strong seller, and also why it’s easy to recommend.