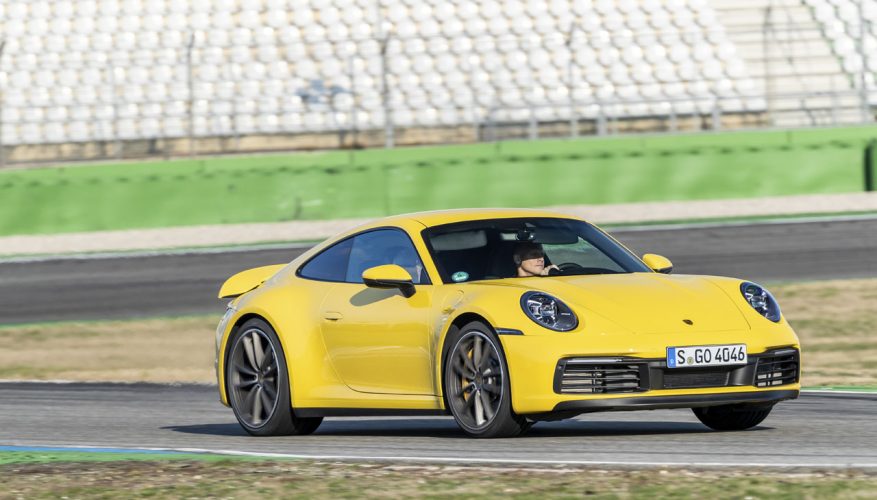 Who isn’t excited to see the new 2020 Porsche 911 Carrera on the road, let alone experience one first hand? While the latest sports car of sports cars might look to some like a mild makeover of a classic design, it’s a radical departure to those who live and breathe Porsche.

Most applaud its fresh new styling, although some have criticized its backside when its attractively tapered deck lid transforms into a rather unorthodox rear wing, but no matter how much you like or dislike the car’s design, the method behind Porsche’s madness is hard to argue against.

Less noticeable than the protruding rear wing are a set of active shutters that hide within the front corner grilles, which open above 70 km/h to minimize aerodynamic drag, while at 90 km/h the just noted rear spoiler gets raised into its most fuel efficient Eco position to once again reduce air resistance, although the aero system’s purpose changes from eco stewardship to maximum speed and grip at 170 km/h, when the front shutters open and the rear spoiler moves farther upward into its Performance position.

What’s more, as part of this Performance position the PASM (Porsche Active Suspension Management) sport chassis automatically drops down by 10 millimetres in order to improve its aero efficiency further, this sole feature adding four seconds per lap to the 911’s Nürburgring performance.

The 911’s adaptive aero also adjusts for new Wet mode, plus the active rear spoiler will literally spring into action when emergency braking is needed by automatically canting farther upward into its “Air Brake” mode, adding downward pressure over the rear wheels for greater braking grip.

How does it work? Like the previous 911, the new model’s sculpted body panels provide precise paths for oncoming air to flow overtop, underneath and around the entire car so as to minimize drag and maximize downforce, a balancing act that’s always challenging to perfect, but the new 911’s adaptive aerodynamics take it a step further by letting that air vent into the front corner intakes, pass through each radiator, and then flow around the front wheels like an air curtain in order to reduce turbulence.

This airflow continues along the 911’s doors before moving up and over the rear fenders into the engine vents mounted below the rear window, which feeds the 3.0-litre, twin-turbocharged horizontally opposed six-cylinder engine’s new air-to-air intercoolers, after which it gets directed down and out rear vents at each side of the back bumper.

For a more visual insight, make sure to watch the video provided by Porsche below, and don’t forget to check out the photo gallery above, where we’ve included some close up shots of the rear wing as well as some illustrations of frontal and rear airflow.