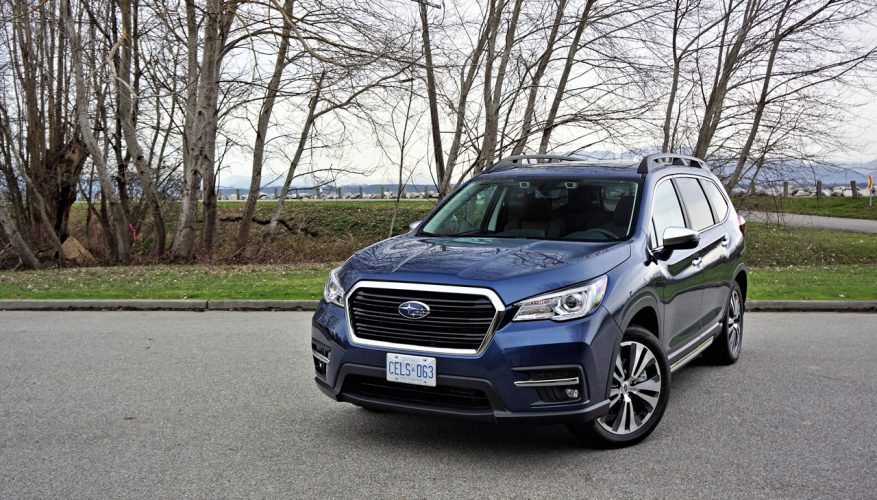 We’ve got something mega in our garage this week, or at least the all-new 2019 Ascent is big for Subaru.

Having arrived here over the summer, the North American-exclusive, three-row, mid-size crossover SUV is configured for eight occupants in standard trim and seven with optional second-row captain’s chairs, the latter setup being how Subaru’s communications team outfitted our tester.

In case you weren’t aware, Subaru has been down the mid-size crossover SUV road before, and I’m not talking about the Outback that not only continues to outsell all tall wagon competitors, but is the best-selling of its kind in history. The model I’m referring to was the 2005 to 2014 Tribeca, which was nicely finished and very competent from a performance standpoint, yet suffered from frontal styling that wasn’t accepted by the masses and a third row that was cramped at best, whereas the new Ascent pulls design cues from Subaru’s highly successful current Forester and Outback, albeit with a larger grille and a longer, taller profile, while it’s anything but short on size.

To put this into perspective, the new Ascent is 48 mm (1.9 inches) shorter than the mid-size three-row SUV category’s best-selling Ford Explorer, albeit with a 24-mm (0.9-inch) longer wheelbase, while some might also be surprised to find out the new Subaru is 42 mm (1.6 inches) taller than the big blue-oval utility. The only Explorer measurements to exceed the Ascent relate to width, which show Ford’s SUV a considerable 119 mm (4.7 inches) wider with 66 / 71 mm (2.6 / 2.8 inches) more front / rear track respectively. This said the Explorer is one of the mid-size segment’s largest SUVs.

By the way, that was only a partial list of the Ascent’s three-row mid-size crossover SUV challengers, the full list (from best-selling to least during the first three quarters of 2018) including the Explorer, Sorento, Highlander, Atlas, Pilot, Durango, Pathfinder, Chevrolet Traverse, Santa Fe XL, Dodge Journey, GMC Acadia, Mazda CX-9, and Ford Flex.

These figures compare well against key rivals, with Ascent passenger volume even exceeding the Explorer’s and its standard eight-occupant seating configuration a rarity in the class, while the big Subaru’s maximum cargo capacity is amongst the segment’s most accommodating too. Also important, rear passenger access is made easier due to rear doors that open to 75 degrees.

Being a Subaru SUV the Ascent includes standard full-time Symmetrical AWD, which has proven to be one of the more capable available. Its initial advantage starts with more evenly balanced weight distribution thanks to a longitudinally-mounted engine and transmission, its competitors chassis architectures derived from FWD models housing transversely-mounted motors, while Subaru’s horizontally-opposed flat “boxer” engine allows for a lower centre of gravity.

Furthermore, Symmetrical AWD applies more torque to the wheels with the most grip, which is not only designed to enhance traction when taking off but to improve overall control at speed, so in theory the Ascent should be plenty capable no matter the road or trail surface it’s traveling over, while its standard X-mode off-road system, complete with hill descent control, and its generous 220 millimetres (8.66 inches) of ground clearance for overcoming obstacles, snow banks, etcetera, should make easy work of the rough stuff. We’ll let you know just how capable the Ascent is in our upcoming road test review, and of course give you a full report on its on-pavement driving dynamics too.

Power comes from a new turbocharged 2.4-litre four-cylinder engine, which as noted is once again a horizontally opposed design. It makes a healthy 260 horsepower and 277 lb-ft of torque, the latter maximized between 2,000 and 4,800 rpm. Subaru will likely use this engine as a replacement for its aging 3.6-litre H-6 in top-line Outback trims too, being that the new four-cylinder produces 4 more horsepower and 30 additional lb-ft of torque than the six.

Of course, at 11.6 L/100km city and 9.0 highway for the new 2.4-litre four when used for in the Ascent, compared to 12.0 and 8.7 respectively for the larger displacement H-6 in the Outback, the smaller engine would be much more efficient in the Outback as well. Of note, both four and six cylinder engines use variations of Subaru’s High-torque Lineartronic CVT (Continuously Variable Transmission), considered to be one of the more efficient types of transmissions available and ideal for mid-size crossover SUV applications thanks to smooth, linear power delivery.

With the Ascent, Subaru adds a standard set of steering wheel paddle shifters to improve driver engagement, along with an eight-speed manual mode featuring sportier driving characteristics and standard Active Torque Vectoring, first introduced on the WRX and WRX STI performance models, so expect us to report something positive about its driving dynamics when we deliver our full review.

Likewise, expect some insight on the Japanese brand’s car-like ride and handling claim that comes from the Ascent’s use of the new Subaru Global Platform (SGP), which combines rigid yet lightweight unibody construction with a fully independent MacPherson strut front and double-wishbone rear suspension system, enhanced further by a stabilizer bar mounted directly to the body at the rear and electric rack and pinion steering up front. This all rolls on 18-inch silver five-spoke alloys on 245/60 all-seasons with the Ascent’s two lower trims and 20-inch machine-finished high-gloss split-spoke rims on 245/50 rubber for the two upper trims, my tester benefiting from the latter.

All 2019 Subaru Ascent pricing was sourced from CarCostCanada, where you can also find detailed pricing on trims, packages and standalone options for every other new model sold in Canada, plus otherwise hard to get rebate information and dealer invoice pricing that could save you thousands.

Our review will specifically focus on the Ascent Premier model we’re testing this week, and of course be more biased and experiential, covering our personal views on styling, interior fit, finish and materials quality, its features and how well they work, the SUV’s overall livability compared to others it competes against, how it drives on and off the road, plus more. So make sure to come back for our no holds barred 2019 Subaru Ascent Premier road test review…