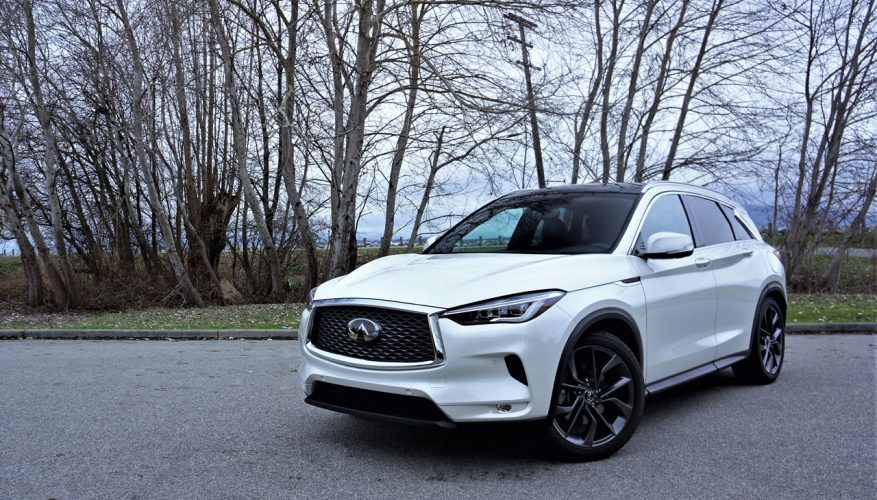 Considering how important the compact luxury SUV segment is within the entire auto sector, what took you so long Infiniti?

Of course, unlike Cadillac that’s just starting to offer its XT4 compact SUV now (Alfa Romeo even beat them to the mark with their Stelvio), the QX50 has long been part of Infiniti’s lineup, its previous EX35 nameplate reaching all the way back to 2007 when it arrived as a 2008 model. It was rebadged QX50 in 2013 as part of Infiniti’s Q (car) and QX (SUV) renaming scheme, and received an updated grille and lower fascia for 2015, but this means the FM platform-based crossover soldiered on mostly unchanged for 11 years before the new second-generation 2019 QX50 started rolling out of its Aguascalientes, Mexico production plant a little more than a year ago.

The new QX50 couldn’t be any more different than the outgoing model, from the previous SUV’s rear-wheel drive biased architecture to a totally new front-wheel drive based layout, although take note that all-wheel drive is standard here in Canada. Manufacturers have been moving away from rear-drive platforms due to interior packaging restrictions, something Audi and Acura have known for more than a decade and likely one reason why their compact SUVs continually outsell all opposition.

No doubt Infiniti would love to have similar success, but last year the QX50 was just 12th out of 14 compact luxury SUV entrants, and the latter two were totally new models only available for part of the year. So far 2018 is looking up thanks to this redesign, with sales having surpassed all of 2017 after just nine months, while it’s also passed right on by the Lincoln MKC, Jaguar F-Pace and Land Rover Discovery Sport, almost catching up to the Buick Envision as it’s climbed to ninth overall. It’s entirely possible we’ll see the QX50 in eighth place before the year is out, but now that it’s been in our garage for the better part of a week we think it should be finding even more success than that.

First of all the 2019 QX50 is one great looking SUV. Its front end is especially attractive, positioning Infiniti’s always stylish double-arch grille below a long, elegantly sculpted hood, and flanked by a stunning set of LED headlamps over a clean, sporty lower fascia. Organically shaped panels flow rearward down each side, passing by a nicely detailed chrome engine vent garnish on the upper front fenders, a metal brightwork adorned greenhouse finalizing with Infiniti’s trademark kinked rear quarter windows, and around the back where a particularly appealing rear end design features nicely shaped LED taillights, while a variety of 19- to 20-inch alloy wheels round out the design depending on trim.

The QX50 is available in five trims for 2019, including base Luxe that starts at $44,490, Essential for $48,990, ProActive for $52,990, as-tested Sensory for $56,490, and finally top-line Autograph trim for $57,990. For full pricing of 2019 QX50 trims, packages, and standalone options, plus money saving manufacturer rebate info and otherwise hard to get dealer invoice pricing that could help you save even more, make sure to visit CarCostCanada.

Moving up to Essential trim adds a number of items you might want on your must-have list such as rain-sensing wipers, front and rear parking sensors, reverse tilting side mirrors, Infiniti’s 360-surround Around View parking monitor with moving object detection, navigation with detailed mapping, tri-zone automatic climate control with rear controls, leather upholstery, a powered tilt and telescopic steering column, plus memory for that steering wheel as well as for the front seats and side mirrors.

Autograph trim moves up the luxury while offering something even more individually bespoke looking, thanks to special blue ultrasuede accents replacing the black found in the Sensory model, plus white used for much of the instrument panel, centre console sides, door inserts and seats, the centre inserts of the latter featuring diamond-quilted semi-aniline leather, plus blue piping between the white leather and blue ultrasuede.

On a more practical note, the new QX50 is quieter than the outgoing model thanks to active engine mounts plus acoustic windshield and side window glass, while it’s also much roomier, especially when for rear passengers that now enjoy considerably more leg and headroom. In fact, Infiniti claims its rear seat space is greater than the best-selling Audi Q5 and BMW’s X3, while those back seats now slide fore and aft for more cargo space or better legroom respectively, the former growing by a substantive 368 litres to 895 behind the 60/40 split-folding rear seats, even when they’re pushed all the way backward, while sliding the rear bench as far forward as possible adds another 153 litres of gear toting capacity for a total volume of 1,048 litres when both rows are occupied. Lay the second-row seatbacks flat and cargo space expands to 1,822 litres.

In fact, WardsAuto just added the QX50’s new VC-Turbo to its 2019 model year 10 Best Engines list, which is nothing new for Infiniti that’s long had one of its V6 mills honoured likewise, the latest being the Q50/Q60’s 3.0-litre twin-turbo VR V6, with previous generation 3.7- and 3.5-litre engines awarded as well. The 2.0-litre four-cylinder VC-Turbo is the world’s first production variable compression ratio engine, a technology that took Infiniti’s engineering team four years to develop. It features special connecting rods between its pistons and crankshaft that vary the compression of the fuel and air mixture, less for increasing power output when needed and more during lower loads like cruising and coasting for improving fuel efficiency.

The result equals 268 horsepower and 280 lb-ft of torque while fuel economy is closer to a 2.0-litre diesel four than anything gasoline-powered with similar performance. Combined with a new shift-by-wire continuously variable transmission (CVT) featuring manual shift mode, steering wheel paddles, Downshift Rev Matching, and dual transmission fluid coolers, Infiniti claims the new QX50 is 30-percent more efficient than the outgoing model, which was five-cycle rated at 13.7 L/100km city, 9.8 highway and 11.9 combined compared to 10.0 city, 7.8 highway and 9.0 combined for the new powertrain. Even with today’s fuel prices dropping along with the price of oil, every little bit counts when also factoring in our fragile economy that’s following that downward trajectory plus our currency’s never-ending devaluation through central bank managed inflation and other budget-busting price hikes.

How does it all work in the real world? I’ll tell all in my upcoming road test review, plus offer my driving dynamics critique, comment on interior quality, fit, finish and features, etcetera. Make sure to come back for the full review soon, and while you’re waiting take the opportunity to enjoy all the photos in the comprehensive gallery above…