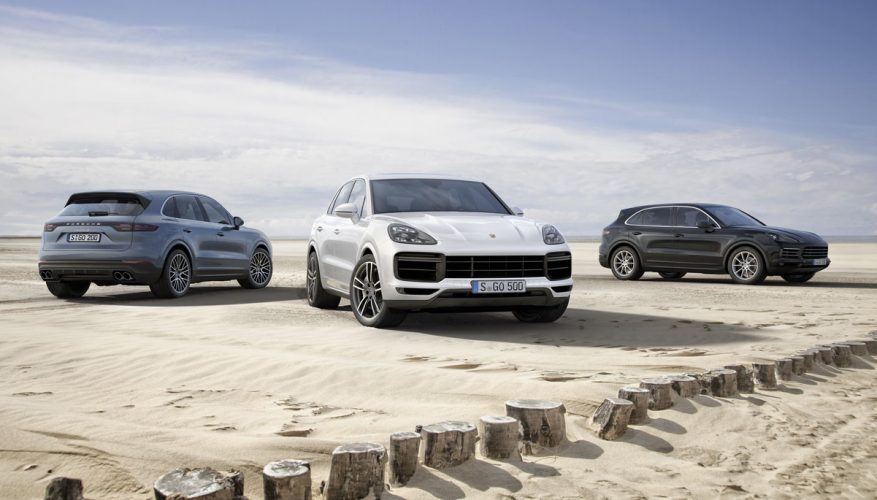 While the majority of car enthusiasts will immediately conjure thoughts of the legendary 911 sportscar when Porsche enters the conversation, crossover SUVs are the German premium brand’s biggest sellers. Such is the case with most automakers in today’s sport utility crazed market, and the Porsche Cayenne gets credit for being in on the early stages of this relatively new automotive phenomenon.

The Cayenne was first introduced in 2002, and quickly became Porsche’s most popular model. Now that mantle falls on the smaller, more affordable Macan, with the two having made up more than 70 percent of the brand’s best-ever Canadian sales last year. Still, the Cayenne is key to continued profits due to its higher cost of entry and much pricier high-end model lineup.

What’s more, Porsche sales are on an even stronger course in 2018 than the previous record year, up more than 40 percent over the first nine months, and now with a completely redesigned third-generation Cayenne, 2019 should be a banner year if our shaky economy holds up.

That wheelbase length remains identical from old to new at 2,895 mm (114.0 in), yet the ability to slide the rear seats fore and aft by about six inches allows for more rear legroom, while the really big interior gains show up behind the back seats where 100 litres (3.5 cubic feet) of cargo space has been added for a new total of 770 litres (27.2 cu ft), which is almost a 15-percent improvement over the outgoing model. Additionally, when the standard 40/20/40-split reclining rear seatbacks are lowered they form a nearly flat loading floor, improving the Cayenne’s practicality even more, while expanding its load carrying capacity to 1,710 litres (60.4 cu ft).

Surprisingly, despite the new model’s increased size it’s now 55 to 65 kilograms (121.2 to 143.3 lbs) lighter, depending on trim and configuration, thanks to a body structure made from roughly 50 percent aluminum (including the front wings, doors, side panels, roof and rear liftgate) and 50 percent high-strength steel, plus other mass-reducing components such as a lithium-ion polymer (LiPo) starter battery that saves 10 kilos (22 lbs) on its own.

This also results in better weight distribution, now about 55/45 percent front/rear in base configuration, so together with an increase of about 20-percent in overall torsional rigidity due to the tauter mixed-metal construction method, which according to Porsche includes more than 6,800 MIG (metal inert gas) and laser weld points, 630 “float drill screws”, and 170 metres (557 feet) of bonding agent for each Cayenne produced at the brand’s Bratislava, Slovakia assembly plant, improvements have been made to straight-line performance, handling and fuel-efficiency.

To that end the mid-size crossover SUV is pulling yet more cues from Porsche’s legendary 911 sports car, particularly by providing staggered narrower-to-wider front-to-rear tire sizes on all trims, as well as new optional Rear Axle Steering, the latter feature helping to reduce the Cayenne’s turning radius at low speeds for easier manoeuvrability in tight spaces like parking garages.

Also improving handling, albeit at higher speeds, the new Cayenne’s front suspension gets upgraded from the old double wishbone design to a multi-link setup like the rear, which promises to enhance steering response while maintaining better tire contact with the road surface below.

Continuing on the theme of relentless grip, the Stuttgart brand also includes its Porsche Traction Management (PTM) active all-wheel drive system as standard equipment, which comes together with an electronically variable, map-controlled multi-plate clutch, an automatic brake differential (ABD) and anti-slip regulation (ASR), while options include a new three-chamber Adaptive Air Suspension with alternative ride heights that are preset to 28 mm lower than normal or 56 mm taller than normal, plus improved Porsche Dynamic Chassis Control (PDCC) electronic roll stabilization, which now benefits from the Cayenne’s new 48-volt electrical system that allows for faster-reacting electrical components compared to the old model’s hydraulic system. All are now made to work more effectively via standard Porsche 4D Chassis Control, resulting in the most capable Cayenne yet. Also important, the new Cayenne can still tow up to 3,500 kilograms (7,700 lbs) of trailer weight.

The new third-generation Cayenne is now available in base Cayenne trim for $75,500 plus freight and fees, while other trims include the $92,600 Cayenne S, $91,700 Cayenne E-Hybrid, and $139,700 Cayenne Turbo, with a Cayenne GTS and other variations no doubt on the way.

For 2019, the base model’s V6 engine loses 600 cubic centimetres on its way from 3.6 to 3.0 litres of displacement, yet is now turbocharged for 35 more horsepower and 37 additional lb-ft of torque resulting in a new maximum of 335 horsepower and 332 lb-ft, the latter arriving 1,000-plus rpm sooner at 1,840 rpm. It’s good for a zero to 100km/h sprint time of just 6.2 seconds, or 5.9 seconds with the Sport Chrono Package, and is now capable of a 245 km/h top track speed, which incidentally is a massive performance gain over the previous base Cayenne model that could only manage the same feat in 7.6 seconds, whereas its top speed was just 230 km/h.

The upgraded Cayenne S includes a 2.9-litre twin-turbocharged V6 that makes 434 horsepower and 406 lb-ft of torque for a significantly quicker 5.2-second sprint from standstill to 100km/h, or 4.9 with the Sport Chrono package, plus a new top speed of 265 km/h.

The new E-Hybrid raises the game for electrified Cayennes by combining the base 3.0-litre V6 with a plug-in hybrid drivetrain featuring a 14 kWh lithium-ion battery with on-board charger, resulting in a shocking new total of 455 net horsepower and 516 lb-ft of torque, and a zero to 100km/h time of 5.0 seconds with its standard Sport Chrono Package, plus a top speed of 253 km/h.

Improving performance further, the Cayenne will offer the choice of three driving modes including Comfort, Sport and Sport Plus, as well as an Individual mode that lets each driver configure their own personal setup.

Improving performance further is a new world-first optional high-performance braking technology dubbed Porsche Surface Coated Brakes (PSCB). The cast-iron discs are coated with 70 micrometers of tungsten carbide, which, when bedded in cause a mirror-like finish to the surface of each rotor. Porsche promises stronger performance over steel brakes, with reduced wear and therefore a longer life. In fact, Porsche claims a 35-percent reduction in brake wear when upgrading to PSCB, while brake dust is reduced by up to 50 percent. Also, they’re available for less than half the price of the optional Porsche Ceramic Composite Brake (PCCB) package.

Styling plays an important role in any new model’s redesign, but the Cayenne’s reshaped body panels also aid performance due to an improved coefficient of drag of 0.35. Most will more likely be drawn to its Macan-inspired front fascia that, as always, looks meanest in Turbo guise. This is where its familial resemblance to the all-new 2020 911 is most obvious too, its wide, squared-off, blackened grille opening much larger and more dramatic than the air intakes found on previous generations, while the new Cayenne’s narrow, body-width single-unit LED taillight cluster shares much with the new 911 and Macan as well.

Other muscular details include aggressive hood creases and deeper Coke bottle-like sculpting at each side, while the roofline tapers downward in 911 coupe-like fashion as it nears the rear hatch, this now possible due to a much more design-flexible Volkswagen group MLB platform architecture that no longer forces the Cayenne to share its side doors with the Touareg.

Inside, the new Cayenne receives improvements in design, materials quality, and refinement, but most will likely notice its new electronic interfaces first and foremost. The primary gauge cluster features dual 7.0-inch TFT colour displays flanking a classic analogue tachometer at centre, while just to the right is the same 12.3-inch Porsche Communication Management (PCM) touchscreen infotainment system first used in the second-generation Panamera. Resolution quality, depth of colour and contrast, plus operating system speed is all improved, as is overall ease of use and the amount of features as well as their functionality, with some highlights including a rearview camera with ParkAssist front and rear parking sensors, Apple CarPlay smartphone connectivity, an Online Navigation Module, wireless internet, Bluetooth with streaming audio, 10-speaker 150-watt audio, satellite radio, and Porsche Car Connect that adds Carfinder, Remote Vehicle Status, Remote Services, and the Porsche Vehicle Tracking System (PVTS).

The 2019 Cayenne is currently available at Porsche retailers across Canada, but before you head down to your local Porsche dealership make sure to check out our massive photo gallery above and watch all the videos below: