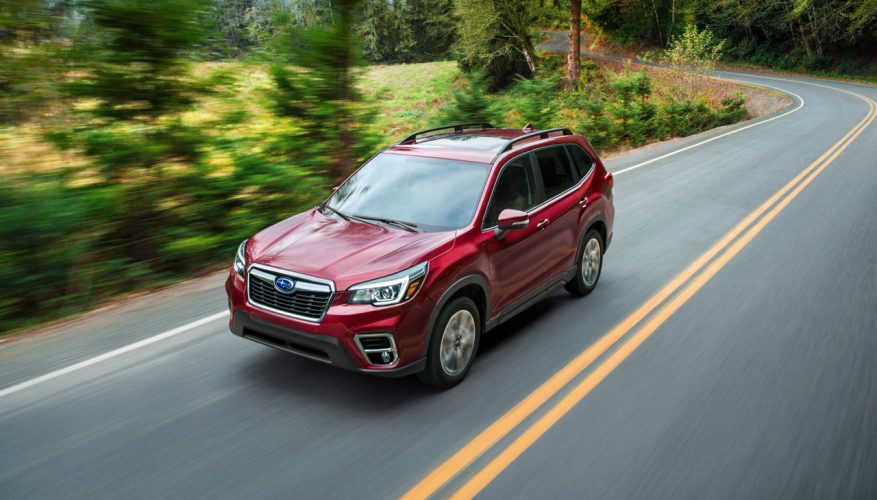 The completely redesigned 2019 Forester, now in its fifth-generation, is just arriving at Subaru dealers nationwide, with a new price of $27,995.

In case you were wondering that’s $2,000 pricier than last year’s base Forester, but it now comes standard with a host of features that should make the bump in MSRP well worth it.

First on the list is a set of stylishly safer LED headlamps, a technology that previously required a move up to Limited trim in order to partake, and one that’s still optional with most of its rivals including the totally redesigned 2019 RAV4 and recently redesigned Honda CR-V—the Mazda CX-5 already comes standard with LED headlights and refreshed 2019 Jeep Cherokee now does as well.

The Forester’s new LED headlamps also feature automatic on/off so you won’t always have to remember to turn them on and off manually, this standard feature part of last year’s Convenience upgrade, while new standard automatic climate control gets pulled up from 2018’s Touring trim.

Additionally, a new electromechanical parking brake replaces the old handbrake, freeing up space between the front seats and modernizing the driving experience, while new auto vehicle hold replaces the old hill holder system that previously only came with the manual transmission that’s now been discontinued. In its place, Subaru’s Lineartronic continuously variable automatic transmission (CVT) is now standard across the line, which means that Subaru’s impressive X-Mode off-road system with Hill Descent Control, and SI-Drive drive mode selector are now standard too.

Along with that CVT and Subaru’s much lauded Symmetrical full-time all-wheel drive system that remains standard, the 2019 Forester gets a new direct-injection enhanced 2.5-litre four-cylinder boxer engine that’s good for 182 horsepower and 176 lb-ft of torque, which is a 12-horsepower and 2-lb-ft advantage over last year’s identically sized base engine. The drivetrain now includes an auto start/stop system that automatically shuts off the engine when it would otherwise be idling, which helps to reduce emissions while improving fuel economy, the latter resulting in a 0.2 L/100km savings despite the increase in performance, from 9.2 L/100km city, 7.4 highway and 8.4 combined to 9.0, 7.2 and 8.2 respectively.

The big change for 2019 isn’t what comes with the Forester, but rather what’s no longer on offer being that Subaru has discontinued the SUV’s optional 2.0-litre turbocharged engine upgrade that previously put out 250 horsepower and 258 lb-ft of torque and still managed a relatively thrifty 10.2 L/100km city, 8.6 highway and 9.5 combined. Granted, few vehicles in this class offer such a potent optional engine, but nevertheless it was an important differentiator in a market segment that’s rife with competition.

Regarding infotainment, the standard infotainment touchscreen is now 0.3 inches larger in diameter at 6.5 inches, and now features standard Apple CarPlay and Android Auto smartphone compatibility that wasn’t even optional before.

Above the base 2.5i, features become even more generous in second-rung Convenience trim, while the 2019 Forester can also be had in Touring, new Sport, Limited and new top-line Premier trims.

EyeSight comes standard with all other trim levels, including the $32,995 Touring model that gets everything already mentioned as well as automatic high beam assist, a large power-sliding glass sunroof with a sunshade, and a powered tailgate with memory function.

Above this, Sport, Limited and Premier trims get a new two-mode X-Mode off-road system that’s capable of even greater go-anywhere prowess thanks to separate settings for snow and dirt, as well as deep snow and mud, while larger 316 mm front rotors add better braking power over the standard 294 mm discs.

Additionally, these three trims include steering responsive headlights and Subaru’s Side/Rear Vehicle Detection (SRVD) system as standard equipment, improving safety, plus a leather shift knob and a new 8.0-inch touchscreen adds an inch to the diameter of last year’s top-line infotainment interface, while once again including Apple CarPlay and Android Auto where there wasn’t such smartphone connectivity last year. These upper trims also include dual rear USB ports for a new total of four, plus A/C ducts on the backside of the centre console, and reclining rear seats.

The new $34,995 Sport is the visual standout of the 2019 Forester lineup thanks to a unique gloss black grille, special front corner grilles, a larger rear spoiler, a blackened out trim strip that runs across the rear liftgate before striking through the taillights, a unique rear under-guard, plus bold orange trim on its front fascia, roof rail posts, side sills and rear bumper, the latter wrapping up and over the exhaust to highlight a chromed tipped tailpipe, while a bright orange “SPORT” badge gets added to the liftgate. The Sport also gets exclusive dark metallic 18-inch alloys with subtle orange accents, while LED daytime running lights, vertically stacked LED fog lamps and LED turn signals integrated within the mirror caps add to its upmarket appeal.

Of note, all pricing was verified at CarCostCanada.com, where you can also find detailed trim and feature pricing, dealer invoice pricing that let’s you get the best deal possible when negotiating for your new Forester, and rebate information on any discounts that might be available to you.

All of the new 2019 Forester’s features come within a compact SUV that’s been thoroughly redesigned around the new Subaru Global Platform (SGP), which has resulted in greater refinement, capability and dynamic performance, plus considerably more interior space.

A press release about the new 2019 Forester promises “maneuverability that’s synonymous with the popular Subaru,” but we’ll need to properly road test it in order to relay any improvements to its driving dynamics.

Until then, make sure to check out our photo gallery of the 2019 Subaru Forester above.