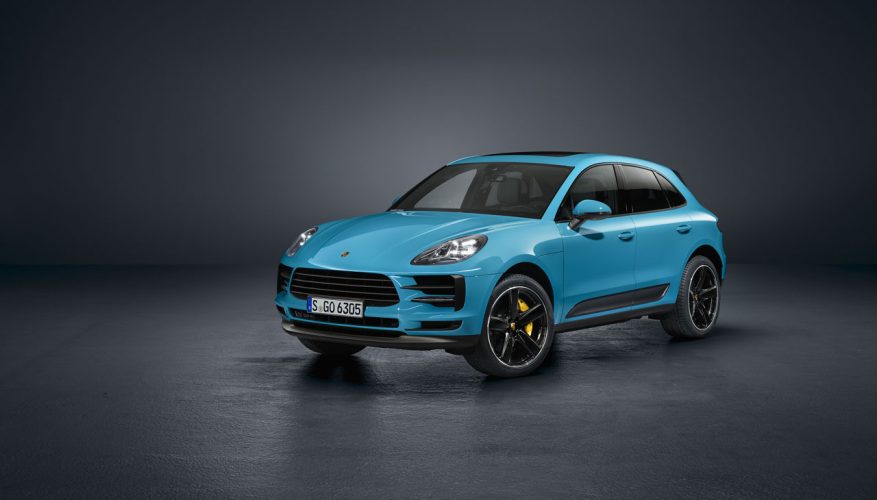 Porsche just revealed the 2019 Macan at a special world premiere event in Shanghai, China, allowing the many fans of the current model to breathe a sigh of relief that their favourite SUV isn’t changing too much.

First off, with the purpose of reflecting the DNA of the brand’s iconic 911 sports car and the 918 Spyder, the front and rear designs have been enhanced to appear wider, giving the Macan a sportier, more rooted to the road appeal. Specifically, the grille includes more pronounced horizontal slats, while the ducts to each side get squarer outer edges that taper outward as they drop down, with a thicker, more visible vertical trim piece finishing off their corners, and narrower LED fog lamps positioned on the slats instead of above or below depending on the model, as was done previously. What’s more, the lower fascia gets more horizontal lines to broaden its look, while previously optional LED headlamps with trademark Porsche four-point character lights are now standard.

Walk around to the rear of the 2019 Macan and you’ll see the most significant change, the taillights having morphed from two individual units into one single three-dimensional strip of LED elements, similar to the recently redesigned Cayenne. Like the headlamps, the larger wraparound corner portions of the new mono-taillight also incorporate four-point character LEDs, while the rest of the liftback, bumper, and lower fascia appear to be carryover. No matter the angle, the end result is an attractively modernized 2019 Macan, while owners can further personalize its appearance with various trim levels, myriad wheel and tire combinations, plus new Dolomite Silver Metallic, Mamba Green Metallic, Miami Blue, or Crayon exterior colours.

As for the cabin, the big changes are digital as is often the case these days. It begins with a new 11.0-inch full-HD Porsche Communication Management (PCM) touchscreen replacing the 7.0-inch unit in the outgoing model. The visual effect is stunning, with much sharper, clearer resolution, and enhanced graphics to complement the look. Likewise, the system’s operating system is faster, which will no doubt improve the speed of new standard intelligent voice control and the now standard navigation system’s mapping adjustments, plus other functions, while it’s more intuitively designed for easier use, this thanks in part to predefined tiles that allow customization.

Additionally, Porsche has now made its Connect Plus module standard, which means that every new Macan is fully networked for real-time traffic information. A key element of this system is “Here Cloud”, which utilizes swarm-based traffic data to find you the quickest route to your destination. What’s more, the Macan’s new Offroad Precision App makes it possible to record and analyze off-road driving experiences.

The larger, wider screen design necessitated additional modifications to the centre stack, so therefore Porsche moved the air vents from their previous positions at each side of the touchscreen, to a new location just below the display where a lidded bin was before. Additionally the audio/HVAC control panel, which slots between the two, is now wider and narrower, maintaining Porsche’s new horizontal design theme.

Options in mind, the 2019 Macan can now be had with a GT sports steering wheel sourced from the 911, while adding the Sports Chrono Package includes a Sport Response Button on the right-side spoke.

Of course, comfort options will improve as well, with an ionizer plus a heatable windscreen available, while Porsche has also added its suite of advanced driver assist systems that include adaptive cruise control with Traffic Jam Assist, this allowing semi-autonomous driving amid congested, slow-moving traffic at speeds up to 60 km/h, with the ability to automatically steer, accelerate and brake.

Porsche hasn’t confirmed the powertrain lineup for the North American markets, but it’s expected the base turbocharged 2.0-litre four-cylinder will receive more output than its current 252 horsepower. As for the model’s V6 engine lineup, the Macan S will likely get a new single-turbo 3.0-litre unit making about 350 horsepower, while the Macan Turbo will be fitted with a new twin-turbo 2.9-litre V6 expected to push power up into the high 400 range. The Turbo should once again be available with a Performance Package upgrade, which currently adds 40 horsepower, while the sporty GTS model will no doubt remain, splitting the difference between S and Turbo trims. Lastly, the current seven-speed automated dual-clutch PDK transmission will remain standard.

The 2019 Macan shown in Shanghai is specific to the Chinese market, so make sure to stay tuned for Canadian market information about trims, features, options, etcetera as the redesigned model prepares for launch later this year.

Until then, make sure to check out a few videos about the 2019 Porsche Macan below: