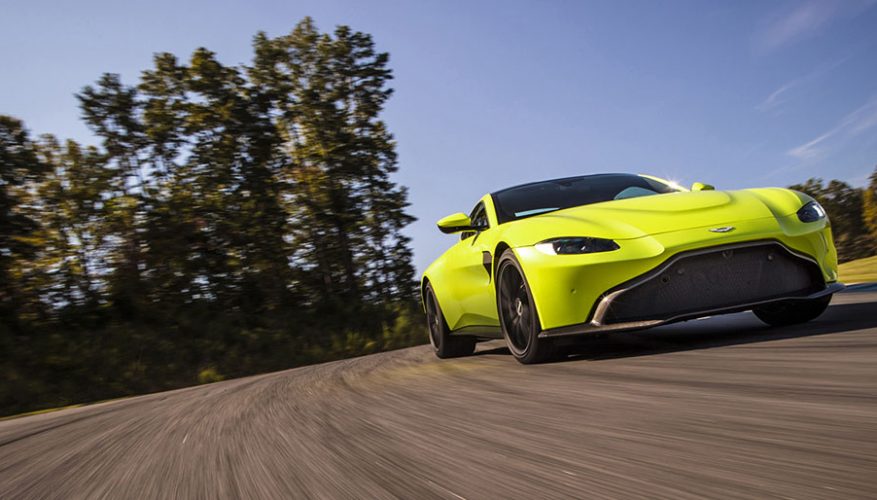 The age-old question “Porsche 911 Turbo or Aston Martin Vantage?” has taken on even greater relevance this year, due to the arrival of the all-new 2019 Vantage.

Making the argument from Gaydon, England even more appealing, the revolutionary new Brit is $11,705 less expensive than the continually evolutionary German, at $172,495 compared to $184,200 (2018 model year pricing).

If you think that’s impressive, consider the 2019 Vantage is a shocking $50,940 more affordable than the previous generation, that being the $223,435 2017 iteration that only came to Canada in 565-horsepower V12-powered trim.

Then again, only a year prior the base 2016 V8 Vantage was priced at a mere $109,400, just above the 370-horsepower Porsche 911’s starting price, but before we stop celebrating the just-noted $50k savings and begin to lambaste the UK powers that be for upping the new 2019 model’s price by $63,095, consider its 4.7-litre V8 only made 420 horsepower and 346 lb-ft of torque compared to the new 2019 model’s 4.0-litre twin-turbo V8 that puts out 503 ponies and 505 lb-ft of twist, and then factor in that it’s a completely redesigned car from the ground up, making the outgoing model look and feel like the modern-day classic it truly was.

After all, the Vantage dates back to 2005, and during that near 14-year period it had only seen minor updates. Such is common amongst smaller industry players in the ultra-luxury sector, with similarly positioned cars such as Bentley’s Continental GT dating all the way back to 2003, despite a second-generation in 2011 that looked very much like the original.

That Continental is totally new for 2019 too, and beautiful in its own right, but we can safely say the new Vantage is a far more radical design departure from its predecessor than Bentley’s upcoming Conti is from its forebear. The new AMV 8 was heavily influenced by the sensational DB10 prototype best known for its “star car” appearance in the 2015 James Bond film Spectre, although close inspection shows a great deal of refinement from concept to reality.

The result is a major deviation from the classic Aston Martin grille design, or at least the placement thereof. To be clear, the general shape of the grille remains the same, this easier to see with Vantage models featuring the inner outline of their grille painted in a coat of bright, colourful Lime Essense, but with cars that alternatively leave this section shaded in a darker hue the lower portion of the grille seems to completely disappear into the road surface below. Certainly Aston will allow customers to play with this optical illusion via the myriad paint colours available, which should provide some wonderful results. In the end, enlarging and lowering the classic AM grille has created an entirely new, much more modern look for a brand that was probably relying too much on past glories before, while keeping all-important heritage fully intact.

The flush LED headlamp clusters look small in comparison to that grille, while the always long and elegant Aston hood appears even more extended thanks to the need to reach further downward to meet the grille. Likewise, the front fenders snuggly hug a large set of alloys, leaving a mere sliver of bonded aluminum bodywork above before bending inward to incorporate subtle functional side gill wheel well vents. These bleed rearward into the door skins that hover over wide sill extensions, the latter visually pulled around the car from the front splitter.

Those thinking the design departure is radical when watching a new Vantage approach may realize they hadn’t seen the half of it upon witnessing its hind end round the corner, the model’s single curving car-width taillight an impressive display of LED creativity in action. The rear lamp fluidly flows with the uniquely shaped Kamm-like tail design, raised up in the middle like sports car racers of the past, while the working rear diffuser under the bumper cap looks as if it could’ve been pulled directly from a World Endurance Championship (WEC) Vantage GTE racecar.

Like with the new DB11 V8, the new hand built 4.0-litre twin-turbocharged eight-cylinder stuffed under the Vantage hood hails from Mercedes-AMG, although Aston tunes it for their unique feel and sound. Standstill to 100km/h takes a mere 3.6 seconds, this aided by a 1,530-kilogram curb weight. Aston’s engineering team positioned the new engine as far forward and as low as the chassis design allowed, which resulted in ideal 50/50 weight distribution.

That balance was aided by the new Vantage’ rear-mounted, eight-speed ZF automatic transmission, while the carbon-fibre driveshaft that spins in an alloy torque tube benefits all performance criteria. The automatic is standard, which means no manual gearbox is available for the time being, but rumour has it a seven-speed DIY transmission will become the base gearbox in the near future.

Of course, Aston provides the Vantage with driver selectable modes including Sport, Sport Plus and Track, while the new electronically controlled differential is a Gaydon first, this working in conjunction with the braking system to enhance high speed handling via torque vectoring.

Being that the Vantage is the sportiest Aston in the lineup, its speed-sensitive electric power steering features a tighter lock-to-lock ratio than the larger DB11, while it’s also tweaked for more aggression off-centre. Added to this is a 2,704-mm wheelbase, the new Vantage 100-mm shorter than the DB11 and therefore more reactive to turn-in through tight, fast-paced corners.

Sharing components with its larger sibling would only make sense, and to that end 30 percent of the aluminum Vantage chassis comes from the DB11. This of course means that 70 percent of the Vantage chassis is completely unique, this portion including the rear frame that’s now solidly mounted to increase lateral rigidity. The stiffer design results in 2.2 degrees of roll per cornering G-force, which compares to 3.0 degrees with the DB11. Additionally, the newest version of Aston’s Skyhook adaptive suspension provides progressively firmer damping characteristics in its various drive modes, while that 30-percent figure mentioned a moment ago relates to the front suspension components pulled from the DB11.

As you might expect, the new Vantage interior is now fully immersed in the 21st century, so therefore along with the usual Aston Martin handmade detailing of carbon-fibre, aluminum, leather and suede-like Alcantara trim and upholstery finishings, it incorporates the latest high-resolution digital displays ahead of the driver and atop the centre stack. The latter is an 8.0-inch touchscreen, which, like in the DB11, is sourced from Daimler’s parts bin, along with its knurled metal rotating wheel controller and palm rest.

Speaking of knurled metal, Aston has kept its trio of rotating metal knobs on the centre stack, albeit now the centre one is part of the HVAC system, while a bevy of metal trimmed rocker switches fills the open spaces in between while rows of buttons line each side of the aforementioned infotainment controller on the lower console. Additionally, the ignition and gear selector buttons have been repositioned from a horizontal row high on the centre stack to an inverted “V” formation below, where the stack bends into the lower console, while shifts continue to be executed by large, metal paddles fixed to the steering column.

The steering wheel is an appropriately sporty flat-bottomed, leather-wrapped design that features just enough switchgear to appear modern yet not enough to look cluttered. It frames a fully configurable TFT gauge cluster, just like the DB11, which is an important step that once again locks Aston into the new century, yet traditionalists will miss the glorious mechanical/analogue dials that have long been part of the AM mystique.

Comfort is reportedly large on ultra-luxury buyers’ wish lists, even in the more performance-oriented classes, so therefore the new Vantage passenger compartment is improved ergonomically with more headroom and legroom, plus some additional side-to-side spaciousness.

As you might expect, the new Vantage is well equipped with luxury and convenience features too, but take note you’ll still need to pay extra for heatable seats, parking assist, blindspot monitoring, adaptive cruise control, etcetera. Four option packages include Sport, Exterior Black, Tech, and Comfort, with each of these allowing for ample personalization as well.

The 2019 Aston Martin Vantage is available now, but those wanting the convertible Volante version will need to wait until 2019.

Before delving into another story here on TheCarMagazine, make sure to browse through the largest photo gallery we’ve ever put together on any car by clicking on the big photo at the top of this page, and after that check out some videos of the new 2019 Aston Martin Vantage below: