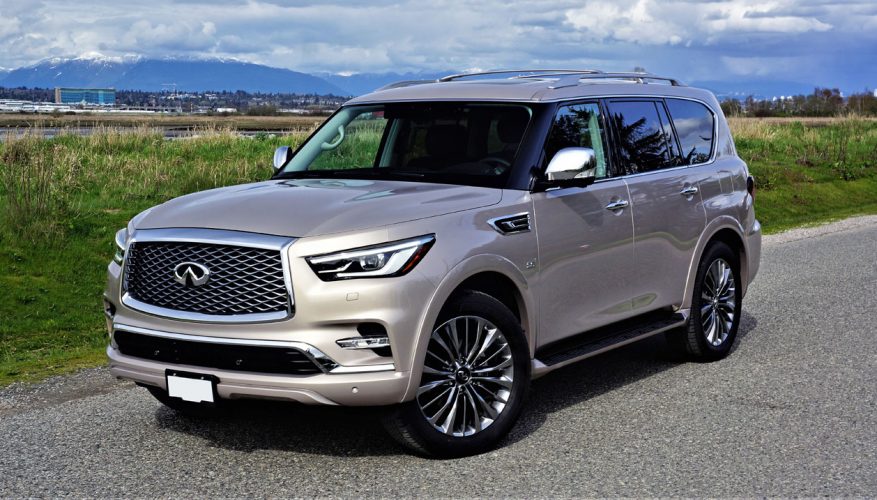 I’ve got a challenge for you. Take a 2018 Infiniti QX80 for a drive and then tell me why it’s not worth $20k more than the $77,350 they’re asking. My guess? You’ll soon be comparing it to full-size SUV rivals from Land Rover, Lexus, and even Mercedes-Benz.

To put its price into perspective, I went onto CarCostCanada.com to size up competitive MSRPs and found out you can get into a well-equipped, impressively finished base model of the handsomely refreshed 2018 Infiniti QX80 for $32,250 less than the 2018 Lexus LX 570, $35,650 less than the Land Rover Range Rover, and $51,550 less than the base Mercedes-Benz G 550. What’s more, the QX80 is $9,190 more affordable than the 2018 Cadillac Escalade and costs $10,300 less than the new 2018 Lincoln Navigator, which should have all of us questioning whether Infiniti priced its full-size SUV too low.

To the ridiculously wealthy such pricing discrepancies won’t make one bit of difference, but value matters to smart luxury SUV shoppers trying to maximize the most from their hard-earned income. To that end the QX80 won’t disappoint, starting with a thorough mid-cycle update for 2018 that includes a redesigned grille, front fascia, hood, fenders, fender vents, and rear bumper, while its LED headlamps, LED taillights, LED fog lamps, and side indicators have been dramatically revised as well. Lastly, Infiniti rounded out the updated exterior design with new 20- and 22-inch alloy wheels, while new exterior colours include Moonstone White, Mineral Black and my tester’s Champagne Quartz, which works really well with all the new details.

Climbing inside reveals some updates to the cabin as well, including a standard contrast-stitched wrapped upper instrument panel and a new shift knob, plus a new stitched and leather-wrapped steering wheel hub/horn pad and diamond-patterned quilting for the upgraded semi-aniline leather door trim and seat inserts when opting for the Technology Package. My test model also had some beautiful high-gloss Espresso Burl hardwood trim around the steering wheel, across the dash and door panels, and down the centre stack and lower console, plus equally tasteful metal accents in key areas. The result is a cabin that looks and feels really rich, matched by high-quality materials like premium soft-touch synthetics on key surfaces including the entire door panels from top to bottom (not so with some competitors), good attention to detail, tight fitment of panels and switchgear, some of the latter finished in beautiful knurled metal, and an overall sense of solidity.

Even when factoring in the extra money spent on the Technology Package, the 2018 Infiniti QX80’s increased $85,500 list price rings in lower than all of the aforementioned competitors’ base prices, while a new no-cost optional interior colour treatment includes Saddle Brown with Charcoal Burl Trim, plus the QX80’s Wheat motif has been updated from low contrast to high contrast. Likewise, the Graphite grey interior gets updates too.

Those standard seats are covered in leather upholstery, albeit not quite as soft and supple as the semi-aniline hides found in my tester, plus they’re heated and climate-controlled for all-weather comfort up front, while my tester’s optional second-row captain’s chairs also came heated, and feature a tip-up easy entry system for the third row that’s simple to operate, plus the 60/40-split third row seats are power-folding and reclining.

A powered rear liftgate is included too, as is a stainless steel rear bumper protector, an integrated Class IV tow hitch with a covered seven-pin wiring harness, tire pressure monitoring, Hill Start Assist, Trailer Sway Control, all expected active and passive safety systems, plus more. Lastly, an eight-passenger QX80 can be had for the same price.

My only complaints include a gauge cluster and an infotainment display that are a bit behind the curve. Okay I’m being generous, as the primary instruments clearly don’t measure up to the expected full colour, TFT, digital wonderment provided by most rivals. By so saying I’m not pronouncing it unfit for business. Its electroluminescent dials are actually quite lovely, while their bright background lighting can be seen in most any lighting condition. The monochromatic trip computer at centre, however, might be the oldest of its type in existence, especially when compared to the high-resolution colour TFT display in your average Honda Civic, but such issues will be taken care of in due time as seen in some of Infiniti’s more recently redesigned models. You just need to be made aware of them now, as throwback electronics can make any new vehicle seem pretty old.

In contrast the infotainment display is much better, and while not top of its class it certainly works well. The touchscreen isn’t all shiny and high-contrast as is en vogue these days, but its matte finish is nevertheless fairly high in resolution and it’s replete with a bevy of useful functions, with a split-screen of backup and overhead surround cameras, bright, clear and accurate navigation mapping, climate and audio controls, which again can be monitored by a split screen for multitasking, rear entertainment controls, driving info like an Eco Drive Report, a nice graph showing average fuel economy (at 16.6 L/100km, ugh! — the actual Transport Canada numbers are 12.2 city, 19.0 highway and 15.1 combined), one for individual tire pressure, a Performance Meter, and so on, while the various menus are filled with nice big digital buttons, some colourful and others a medium blue. I’m not a fan of Android Auto so couldn’t care less that it’s not included, but iPhone owners might wish for Apple CarPlay, which is a much better interface.

As for roominess, few people will actually need this much space. Front headroom is NBA-level tall, while you should have ample side-to-side movement as well. The driver’s seat was superbly comfortable and fully adjustable too, which when combined with the powered steering column made for an ideal fit, aiding comfort and control.

Likewise, the rear quarters are ultimately roomy and extremely well finished. Rear passengers will appreciate roof vents that extend right back to the third row, while there’s also a separate climate control interface on the backside of the front console with heated seat buttons for the second row, plus other plug-ins for the rear entertainment system, the monitors of which get mounted to the backside to the front headrests.

This seven-passenger model features a large centre console between the two second-row captain’s chairs, with its top finished in a nice hardwood veneer, this just ahead of a leather armrest covering a deep storage bin below. You can also access a secondary storage bin from a front hatch, plus two small cupholders are kept hidden below a nice wooden lid up top as well. This said the construction of the console’s base feels kind of cheap, in that it’s basically formed from a massive hard plastic shell that I found a bit disappointing for this class and price range.

On the positive, the third row is easy to access thanks to second-row seats that pop up and out of the way automatically, providing a wide walkthrough. The rearmost seats are large enough for adults too, even three across, while Infiniti provides multiple side cupholders next to rocker switches for reclining the rear seatbacks.

The cargo area is fairly large at 470 litres behind the third-row, and comes complete with a lidded floor providing some hidden storage below. The third row seats power down, albeit ever so slowly, providing up to 1,405 litres of available cargo space, and then power back up again. You need to walk around to the side doors to lay the second-row seats flat, but when you do the QX80 provides a massive 2,694 litres of load area, but with a sloped floor at centre. Also, that second-row centre console gets in the way if you have plans of hauling 4×8 sheets of building material, as it protrudes upward in the middle, so if you’re a do-it-yourselfer I’d recommend going for the eight-seater that fits a regular bench seat into the second row.

Speaking of hauling, the QX80’s standard 5.6-litre V8, good for 400 horsepower and 413 lb-ft of torque and mated to a quick-shifting seven-speed automatic transmission that powers all four wheels via Infiniti All-Mode 4WD with Snow and Tow Modes, can manage up to 8,500 lbs (3,855 kg), which is a sizeable trailer whether suited up for camping or boating.

Unfortunately I didn’t have time for either, but enjoyed the QX80’s power off the line, when passing on the open highway, and likewise appreciated the big SUV’s surprising agility through fast-paced, tight corners. It really feels like a much smaller utility when pushed hard, yet all the while it provides a truly comfortable ride thanks to plenty of suspension travel and good overall compliance.

If off-roading is your thing, take note the QX80 has at least as much 4×4 heritage as its aforementioned rivals, thanks to sharing underpinnings with Nissan’s Armada, which in turn is a rebadged Nissan Patrol, a rugged, go-anywhere SUV nameplate that’s become legendary throughout the world since it arrived on the scene in 1951. That means it’s as experienced and well respected in global off-road circles as Land Rover’s Defender, Toyota’s Land Cruiser and others, the latter forming the basis for the Lexus LX, while Mercedes’ impressive G-Class, or Gelandewagen, only dates back to 1979.

All have decades-long ties to militaries worldwide, not to mention relief organizations, policing, businesses requiring wilderness travel, etcetera, and that on- and off-road prowess can immediately be felt by driver and passengers. The QX80 is a solid, well-built vehicle first and foremost, and an impressively finished luxury SUV after that, which is all the more reason to be amazed at its highly competitive pricing.

It’s no wonder QX80 sales have experienced a major upswing lately, with this updated 2018 model having its strongest results ever in March, 2018, with 147 units sold and a year-over-year gain of 113.0 percent. The QX80 showed strength through all three months of this year’s first quarter too, with sales growth up a solid 66.4 percent, while year-over-year deliveries were still up by a significant 53.1 percent at the halfway point of the year.

Clearly, Canadians have responded well to the 2018 Infiniti QX80’s stylish new design, numerous interior refinements, continued strong performance, and particularly good value. I recommend you take up the challenge and enjoy some quality time behind the wheel.