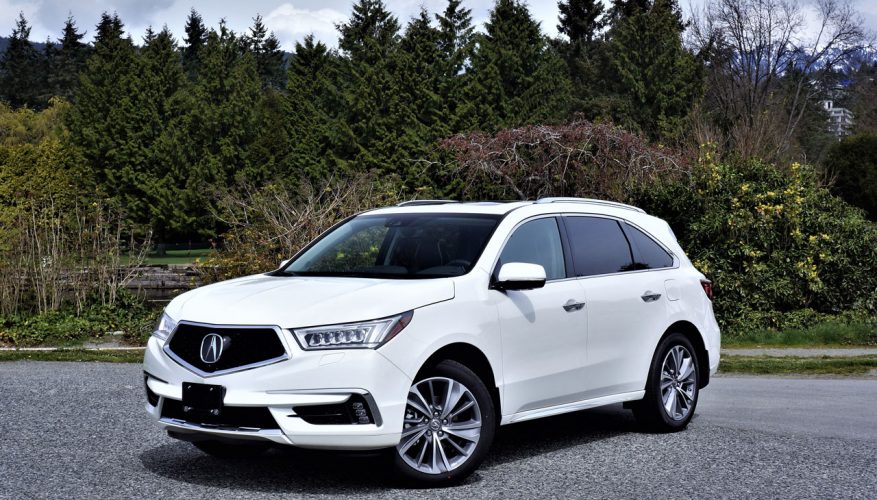 Acura is in an enviable position with respect to SUVs. Its compact RDX has managed to maintain first or second place in popularity since it arrived on the scene in 2009, and its MDX has been the top-selling dedicated three-row model in its mid-size luxury class since 2005. How have they done it? Value.

When I say value, I’m not just talking price. In fact, according to CarCostCanada.com, Canada’s best resource for new vehicle pricing, invoice pricing, rebate information and more, the MDX is not the least expensive three-row SUV in its segment, that attribute (if being cheapest is even considered appealing amongst premium buyers) achieved by the $48,000 Buick Enclave, which is followed closely by the $48,195 Infiniti QX60. The MDX sits third in three-row, mid-size, premium-branded affordability, its 2018 pricing starting at $54,090 plus freight and fees. So why did 20 percent fewer Canadians choose a QX60 and 40 percent less opt for the even cheaper Enclave?

Value is never solely about price, especially in the luxury sector. Overall build quality and refinement are often more important, as well as mechanical sophistication and performance, digital interfaces and other convenience features, advanced driver assistance and safety features, practicality and functionality (these last points particularly true amongst sport utilities), plus reliability, styling and brand cachet that impact residual/resale values. The MDX gets high marks for most of the above, and therefore gets rewarded with consistently strong sales.

Acura addressed styling last year, when a mid-cycle update transformed the frontal design with its new trademark “Diamond Pentagon” grille. The MDX was already ahead of its peers with respect to lighting, its advanced “Jewel-Eye” LED headlamps and LED taillights standard across the line, but many of the SUV’s other design details were enhanced as part of the redo as well.

The refreshed MDX’ interior remained mostly carryover, but for 2018 Acura has added some user-friendlier tech. Specifically, the standard 7.0-inch capacitive touchscreen now includes Apple CarPlay and Android Auto smartphone integration, a bonus for iPhone users due to Apple’s much better interface, plus useful to Android phone owners that can make it work.

To be clear, while I like Android-based phones and have owned many from Samsung, Sony, Asus and Huawei, I’m not a fan of Android Auto. It normally hooks up quickly enough, but its capability is limited and graphic interface dismal. My problem in this case came down to the MDX infotainment system’s inability to recognize that my phone was connected to the correct USB (the one with the smartphone graphic), so there was no Android Auto for me. This could have something to do with the 2016 Huawei GR5 I was using, but it’s a relatively common phone in my parts (up until recently providers were giving it away for free with a two-year contract) and therefore shouldn’t be a problem, plus it hasn’t posed a problem when connecting to other brands’ infotainment systems.

As for Acura’s other 2018 MDX promise, which includes more logically organized functions and an operating system that’s 30-percent faster when responding to inputs, I can attest to both. It’s certainly a better laid out interface than the previous one, but that’s not saying a lot. Unfortunately it remains one of my least favourite infotainment systems to use, and that’s despite being noticeably quicker as well. Somehow Acura has created a system that uses twice as many displays to perform half as many functions, or at least that’s how it seems when trying to perform various tasks. My advice? Acura should study the latest iPad and Samsung tablets, and then do their best to mimic their various functions, such as pinch or swipe capability, without infringing on copyright laws. That’s what Tesla, Volvo, and others have done, and consumers have responded well, while pundits, like me, have given them multiple awards. Acura won’t win any awards for this infotainment system, even with the upgrades.

It’s a shame because the rest of the interior is superb. My tester was finished in top of the line Elite trim, which meant its Black Limba or Olive Ash Burl wood inlays, found across the instrument panel, door panels and lower console bin lid, were real, its perforated Milano leather seat upholstery featured contrast stitching and accent piping, and its feature set was upgraded to include a really useful surround view parking camera, a great sounding 546-watt ELS Studio audio upgrade with Dolby Pro Logic II, 12 speakers and a sub plus more, rear DVD entertainment with an “Ultrawide” 16.2-inch display, a remote, two wireless headphones, and an HDMI input jack, four USB charge points, a 10-way powered front passenger seat, ventilated front cushions, and that’s just on the inside.

I should also point out the Milano leather upholstery was pulled up from mid-range Tech trim, as were the auto-leveling headlamps, auto-dimming power-folding side mirrors, rear door proximity keyless access, a 115-volt household-style AC power outlet, and a set of heatable rear outboard seats.

When you combine other standard items that aren’t included in upper trims, like 18-inch alloy wheels, the base 432-watt eight-speaker audio system, a slightly lower grade of leather upholstery (but genuine leather nonetheless), a less adjustable eight-way powered front passenger’s seat, etcetera, with the comprehensive list above, it’s easy to appreciate how much bang you get for just $53k, while the near top-line Elite shown here starts at $65,360.

To put this price in perspective, that’s less than where the BMW X5 and Mercedes-Benz GLE start out, once again driving home the MDX value proposition. What’s more, the MDX comes standard with a direct-injected 3.5-litre V6 that’s good for 290 horsepower and 267 lb-ft of torque, a sophisticated nine-speed automatic transmission with standard steering wheel paddles, and Acura’s much-respected torque-vectoring Super-Handling All-Wheel Drive (SH-AWD), which was recently upgraded to include a twin-clutch rear differential that directs torque between front and rear wheels, as well as side to side, for faster, smoother cornering and ultimately better traction. When combined with its amplitude reactive dampers and Agile Handling Assist brake torque-vectoring technology, SH-AWD helps the MDX’ rigid body structure and nicely sorted front strut and multi-link rear suspension to manage fast-paced curves well, while providing a comfortable, compliant ride.

Making matters better still, Acura includes something it calls an Integrated Dynamic System (IDS), which includes a Sport mode that quickens throttle response, allows for higher engine revs between shifts, adds steering weight, and sends more torque to the outside rear wheels amid corners to improve turn-in, while it also enhances engine sound. Of course I employed Sport mode often, although I also made sure to leave it in Comfort mode when traveling at regular speeds, especially when managing rough patches of tarmac.

Along with its impressive ride and handling, the MDX remains wonderfully quiet, even when the outside world seems loud and chaotic, and when driven modestly the big SUV proves quite efficient with a claimed combined city/highway fuel economy rating of 10.7 L/100km when fitted with the Elite’s auto start/stop system, or 11.0 L/100km without. It should also be noted the top-line MDX Sport Hybrid receives an even more agreeable 9.0 L/100km combined city/highway rating, while boosting output to 321 net horsepower and 289 lb-ft of torque—something to consider if you want a best-of-both-worlds alternative.

In other good news, after multiple weeklong MDX test drives I’m finally fully acclimatized to its unorthodox gear selector, which is basically a row of buttons plus a single pull-tab-like reverse switch, culminating at the just-noted IDS button. It remains unnecessarily complicated, and could potentially turn off as many uninitiated prospects as it turns on tech geeks, but suffice to say it works well enough once you get used to it, and it looks pretty cool.

That it doesn’t do anything to minimize space usage which would otherwise be taken up by a shift lever, and arguably adds to the level of visual clutter a driver needs to deal with are separate issues altogether. At least it provides some sense of occasion to a cabin that could also benefit from a modernized primary gauge cluster, the latter having yet to be upgraded to a fully configurable digital TFT display, plus, of course, the as yet imperfect dual-display infotainment system chastised earlier.

Other than these few quibbles, the 2018 Acura MDX is a fine SUV deserving of its ardent following. Its inherently well engineered mechanicals provide stronger than average performance, a high level of refinement, reasonably good fuel economy and dependable reliability, while its solid construction makes it feel bulletproof, its superb standard safety set adds to its confidence-inspiring demeanor, and its comfortable and accommodating interior makes it easy to live with no matter the size of occupants or load. Now all you need to decide on is which MDX trim level and colour you want.