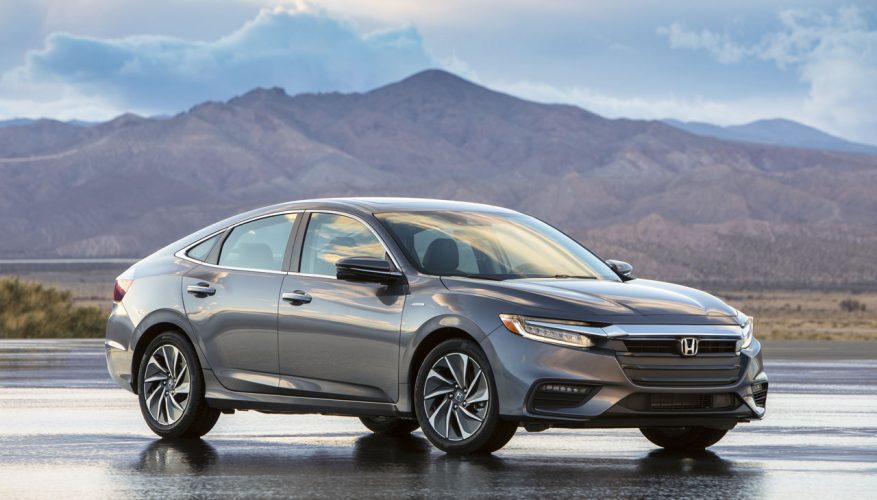 Considering that Honda was one of the first automakers to arrive on the market with a modern-day hybrid, all the way back in 1999 with the first-generation Insight, it’s had spotty success in its quest to electrify the world’s highways and byways.

The original Insight actually beat the Toyota Prius to North American markets, but Honda’s unusual choice of equipping that early model with just two seats meant that it didn’t meet the needs of most buyers. Its lack of an automatic transmission during the first year didn’t help matters either, both shortcomings allowing the four-door CVT-equipped Prius that arrived here the following year to steal the hybrid show. The rest, as they say, is history.

On that note I won’t go into too much detail about Honda’s unenviable HEV past, all of which was covered in my otherwise positive Accord Hybrid review last year, but despite its hit and (mostly) miss two-decade electrification strategy we’ve all got to give the Japanese brand big points for courage.

Such steely nerve is especially true of its recent decision to once again dust off the aforementioned Insight nameplate for the upcoming 2019 model. After all, Honda’s Insight not only failed from a commercial standpoint from 1999 to 2006, but also suffered a second unceremonious death after a short-lived attempt at resurrection from 2009 through 2014. Still, the upcoming 2019 Insight looks like a winner.

“The Honda Insight shows consumers that the efficiency of a hybrid car doesn’t mean sacrificing style, refinement or performance,” said Jean Marc Leclerc, Senior Vice President of Honda Canada Inc. “The Insight is another symbol of a new era in the evolution of Honda electrified vehicles, where customers can have everything they want with no compromises.”

The Insight doesn’t stray too far away from the new 2018 Accord when it comes to styling, but it shares some design elements with the compact Civic as well, while it’s also sized much closer to Canada’s best-selling car. In fact, the new Insight shares its platform architecture with the current 10th-generation Civic, not to mention many of that car’s hard points like the entire roof section, so all of Honda’s HEV fans who are still patiently waiting for an update of the previous-generation Civic Hybrid can now rejoice—this is it.

In a press release that came out as part of its Vancouver launch, Honda called the new Insight a “premium compact sedan,” and while the term premium is normally reserved for luxury branded models like Acura’s ILX, such could just as easily be said for the current Civic in top-line Touring trim. Still, Honda promises “premium cabin appointments” such as “a soft-touch instrument panel with real stitching, ergonomically sculpted seats,” and more.

Honda also touts a number of premium-level Insight engineering enhancements such as better ride quality, a quieter cabin, and, of course, gains in efficiency.

Aiding overall lightness, the Insight’s Advance Compatibility Engineering (ACE) body structure gets an exclusive aluminum hood, while extra sound insulation in the engine bay, behind the front firewall, inside the fenders, and under the front and rear floor improves noise, vibration and harshness levels.

Like the Civic, the new Insight benefits from a fully-independent suspension system with Macpherson struts up front and a multi-link design in the rear, improving ride quality and control during performance driving or accidence avoidance, while the top-tier Insight Touring will benefit from liquid-sealing compliance bushings front and back to further refine the ride.

Unlike the Civic, the new Insight will adapt regenerative braking to a mechanical (friction) electro-servo braking system, harnessing some of the kinetic energy that would otherwise be lost, and repurposing it to the ancillary electrical system.

Honda says the Insight mostly operates like a regular series hybrid, which means that its gasoline-powered ICE connects to the generator motor to produce electricity that’s not only directly used to energize the electric propulsion motor, but also stored in the battery pack, after which such stored energy can be used as needed to assist the ICE for powering the wheels. Additionally, the Insight is capable of driving on 100-percent electric power for short distances at slow speeds.

While nothing said so far is particularly new or unique, the Insight also features steering wheel-mounted paddle shifter-style deceleration selectors that let you choose among three levels of regenerative braking performance, depending on driving conditions, while the new model also gets three selectable driving modes, including normal hybrid mode that defaults upon startup, plus “ECON” and “SPORT” modes that require the press of a console-mounted button. There’s also an available “EV” mode button that lets you to drive about 1.5 km (1 mile) at low speeds under electric-only power. This wide variety of settings allows the ability to personalize a driver’s experience to maximize efficiency or performance.

On that note, Honda promises the Insight will deliver the “best power-to-weight ratio in its class,” this partially due to its aforementioned lightweight body structure.

Interestingly, while some competitors place a transmission between the ICE/electric propulsion motor and the drive wheels in order to regulate speed, Honda’s two-motor hybrid system doesn’t require one, but instead the drive axles are powered directly from the electric propulsion motor. At higher speeds the engine and drive axles are connected by a lock-up clutch, which Honda says is most efficient during highway and freeway operation. Also notable, Honda incorporates its unique pushbutton gear selector for getting underway.

Of course, Transport Canada hasn’t provided any official fuel economy estimates yet, and neither has the U.S. EPA, but Toyota’s U.S. division is claiming mileage of “up to 55 mpg” in the city and “50 mpg or better” combined, which when converted to metric equals 4.3 L/100km city and 4.7 or better combined. As expected these are similar fuel economy numbers to official 2018 Prius ratings, so the new Insight is in good company.

While the new Insight appears long, lean and sleek like a four-door coupe, Honda says the rear seating area is generous with “best-in-class rear legroom of 949 mm” thanks in part to a considerable 2,700-mm (106.3-inch) wheelbase, which incidentally is identical to its Civic Sedan donor platform. Likewise its wide track should result in good side-to-side roominess, just like the Civic, making the new Insight comfortably and easy to live with.

On this note, Honda places the Insight’s lithium-ion hybrid battery pack below the rear seats, which still allows for standard 60/40 split-folding rear seatbacks to increase its passenger/cargo flexibility, while trunk space behind those rear seats measures the same sizeable 427 litres (15.1 cubic feet) as the conventionally powered Civic Sedan.

As would make sense, the new Insight is being manufactured next to the Civic, as well as the CR-V, at American Honda’s assembly plant in Greensburg, Indiana, which will no doubt please President Donald J. Trump. Improving its chance of U.S. success yet further, its hybrid battery unit is made in the automaker’s Marysville Auto Plant in Ohio, while the ICE gets produced in Honda’s Anna, Ohio engine plant, which also builds the engine for the Ohio-made 2018 Accord Hybrid.

The new 2019 Insight will arrive at Canadian retailers this summer, at which point it will become the most affordable HEV amongst Honda’s three-strong electrified lineup that currently includes the $39,900 mid-size 2018 Clarity Plug-in Hybrid and more recently launched $33,090 2018 Accord Hybrid. Expect pricing to start below the Accord Hybrid.