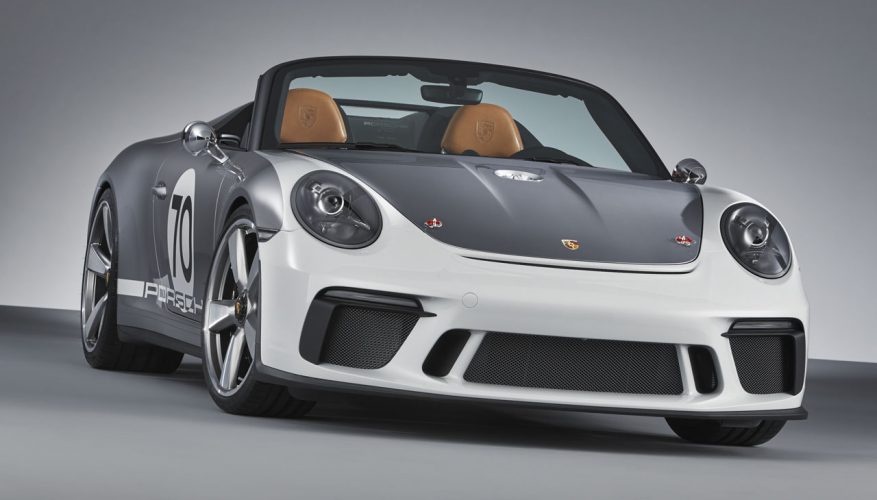 Porsche is now a septuagenarian, with Ferry Porsche, the well-schooled son of the already acclaimed engineer, peoples’ car creator and past Volkswagen Chairman Ferdinand Porsche, having put the brand’s first car on the road in 1948.

It all started with the original Porsche 356 ‘No. 1’ Roadster, which received its operating permit 70 years ago on June 8. Speed ahead seven decades and we now have the stunning 911 Speedster Concept that was created to commemorate the momentous occasion.

The 356 was highly advanced for its time, yet by today’s standards it’s as pure as sports cars get. The 911 Speedster Concept is a modern interpretation of that same undefiled spirit, created to provide a purely visceral driving experience, even eschewing a convertible top for a lightweight tonneau cover.

The paintwork and everything else came care of the Porsche Motorsport Centre, which is more notably responsible for the 911 GT2 RS, and more recently the GT3 RS. Good company for this 911 Speedster Concept to be rubbing shoulders with, and wouldn’t it be wonderful if Porsche decided to give us a series-production version of this new roadster.

Porsche says the “decision on whether to move ahead will be made in the coming months,” with any result of such choice not materializing until 2019. No doubt it’ll be worth the wait.

Like production 911 Speedsters that came before, the first modern interpretation arriving in 1988 and the most recent example based on the 997 from 2010, the 2018 version gets a set of abbreviated A-pillars set on more of a rearward incline than the current production model, resulting in a shorter more sweptback windscreen frame. The side windows are correspondingly shorter as well, the combination giving the Speedster a “stockier profile with a very low fly line,” says Porsche.

Of course, this is not only reminiscent of both 1988 and 2010 911 Speedster homage models, but more so the original 356 1500 Speedster. That model actually came along in late 1954, after U.S. importer Max Hoffman advised the powers that be in Stuttgart that a lower-cost, decontented open-top model could become a sales success in the American market.

While that original 1955 model had a fabric tonneau cover snapped onto its back, the new 2018 version receives a special one-off carbon fibre ‘double bubble’ cover in similitude of the 1988 and 2010 cars’ designs. The new version covers the area behind the front row where the rear jump seats normally reside, and also masks the rollover protection structure that was never part of the 1988 or 1955 model, while a glossy black backing wraps overtop the front portion of the cover to create a shortened Targa-like look. Just behind, the set of contrasting black slats straddling the buttresses are in fact aerodynamic elements, while a Plexiglas wind deflector is set in the middle, highlighted by an engraved ‘70 years of Porsche’ plaque.

Just in case a downpour threatens to ruin the prototype’s beautiful cognac coloured Aniline leather hides, the Porsche Motorsport Centre team has provided a lightweight tonneau cover that, when attached via eight Tenax fasteners, can protect the 911 Speedster Concept’s cabin from inclement weather, but only when parked. When on the road you’d better keep moving.

The interior in mind, Porsche has kept the true spirit of the 911 Speedster intact by removing weighty features like the navigation, radio and air conditioning systems. Even the steering wheel is purely minimalist thanks to the elimination of ancillary switchgear, while the full bucket sport seats are framed in lightweight carbon.

If you’re wondering what the Porsche Motorsport Centre used for a donor car, look no further than the brand’s 911 Carrera 4 Cabriolet, although the concept’s hood, rear cover and aerodynamic components are made from carbon fibre reinforced composite.

Some stylistic links to Porsche’s motorsport past include headlamp lenses imprinted with “X” markings to denote tape that was often used to preemptively prevent broken glass from littering the racetrack and puncturing tires, while the 911 Speedster Concept also features a 1950s-style gas cap placed in the middle of the hood for quick refueling directly above the tank. Additionally, the side mirrors pay homage to the classic Talbot design that was popular when the 356 was created, while the milled, gold-plated “Speedster” lettering on the thick B-pillars and rear engine cover direct their tribute to the original ‘50s-era 356 Speedster.

Of course, everything is cutting-edge modern under the 911 Speedster Concept’s retrospective skin, its chassis actually pulled from the new 911 GT3, while the low-slung drop-top rides on a set of 21-inch Fuchs alloys featuring “contrasting high gloss polished clover-leaf details,” says Porsche, plus centre locks.

The flat six hidden under the handcrafted rear bodywork spins to 9,000 rpm on its way to making 500 horsepower, while a set of custom titanium tailpipes are put in charge of freeing exhaust gases. And as would only be appropriate, the Porsche Motorsport Centre team made sure a six-speed manual transmission took care of shifting duties.

We’ll soon know if Porsche plans to remove the word “Concept” from the 911 Speedster’s moniker, and thereby provide its legions of sports car fans with a modern-day production version of the storied nameplate. Until then we’ll just have to cross our collective fingers and hope for the best.