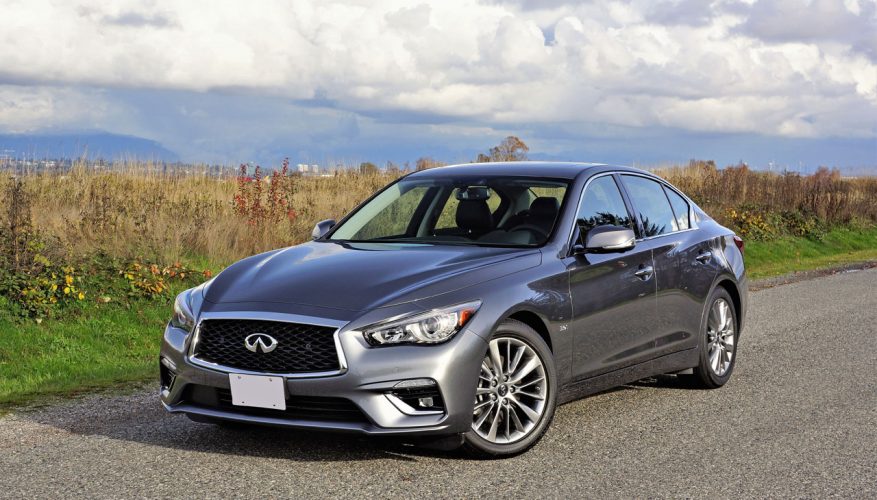 Infiniti gave its popular Q50 sport-luxury sedan a mid-cycle makeover for 2018, and while the refresh wasn’t overdue it was certainly welcome.

Without the need to totally recreate Q50 styling that most would agree was already attractive, the design team was freed to mildly tweak details. The changes include a slightly reworked version of the brand’s trademark double-arch grille that now offers more texture to its wavy mesh-patterned insert, plus muscled up character lines that now follow the upper outside corners of that grille across each side of the hood. Additionally, Infiniti revised the LED headlamps with a more animalistic eye-like design, and reworked the LED taillights at the polar end.

While all these updates help modernize the Q50’s look, the new model’s most noticeable changes were saved for its lower front and rear fascias, which now more clearly depict the trim line, or rather “grade structure” being offered.

On that note the 2018 Q50 is now available in Luxe, Signature Edition, Sport and Red Sport 400 grades. The latter two trims will be familiar to Infiniti faithful, although Luxe and Signature Edition are entirely new. Let’s be first to thank Infiniti for not using Limited or Platinum in the Q50 naming scheme, two of the most overused trim levels in the industry, after which we should give them a collective nod of approval for more visually separating each trim line to benefit those paying more to move up into a higher-end model.

To this end, Signature Edition and Sport grades offer performance-oriented exterior styling, while yet sportier visual upgrades join the model’s most potent 400-horsepower engine in Red Sport 400 trim. Items specific to the three upper grades include a more sharply creased front bumper and wider, lower air intakes, the corner vents edged in glossy black, while the rear bumper gets a bolder black diffuser embedded at centre, with a circular stainless steel exhaust tip at each corner. The Red Sport 400 gets a bit sportier still, with some glossy dark paint and body-colour two-tone detailing on the rear fascia, while the side mirror caps also feature a gloss black treatment, plus it includes a unique set of 19-inch alloys.

While all this is interesting and covered in depth as part of my previous 2018 Q50 Red Sport 400 road test, the model I most recently spent a week with is the more elegantly penned 2018 Q50 3.0t Luxe, which is essentially the Canadian-spec base trim upgraded with the more formidable 3.0-litre twin-turbo V6. This means, instead of the 2.0t turbocharged four-cylinder engine’s 2.0-litre displacement, 208 horsepower, and 258 lb-ft of torque, my tester’s mill produced 300 horsepower and 295 lb-ft of torque for much more pleasing response from takeoff, during highway passing manoeuvres, and everywhere else, plus improved quietness with less vibration for a greater sense of refinement, and lastly a wonderful engine and exhaust note.

It appears I’m not the only one voicing praises to this new mill, as the Nissan/Infiniti VR family of 3.0-litre twin-turbo V6 engines is following in the automaker’s former VQ V6 engine’s footsteps by once again becoming a 2017 Ward’s 10 Best Engines winner.

Like the 2.0t, the 3.0t engine comes mated to Infiniti’s in-house seven-speed automatic transmission and all-wheel drive, the latter system often praised by yours truly and other journos for its rear-biased nature and tenacious grip in both dry and inclement weather, while the Infiniti autobox (also used in Nissan’s 370Z) is a highly advanced bit of cog swapping kit that comes complete with dual transmission fluid coolers, Adaptive Shift Control (ASC) boasting an adaptive learning algorithm that senses a driver’s style and automatically adjusts shifting accordingly (upgraded with navigation-synchronized capability in upper trims), as well as a manual shift mode that helps you drive and sound like a pro thanks to Downshift Rev Matching (DRM).

It all sounds like race-spec equipment, but in the 3.0t Luxe these components are used to deliver creamy smooth, linear power from all over the boosted engine’s rev range, making it easy to manage in any situation. No doubt this is why Infiniti chooses not to offer steering wheel paddle shifters with this particular car, instead only including them with Sport and Red Sport 400 grades. This is a shame as the 3.0t’s formidable power and the car’s overall sporty nature deserve such hands-on engagement, but I made do with the lower console-mounted DIY shift lever when wanting to extract the most from the powertrain.

That’s when the Q50’s updated Rack Electronic Power Steering shows its advantages. This more sophisticated steering system, standard with the V6, is an upgrade over the 2.0t’s vehicle speed-sensitive hydraulic electronic rack-and-pinion power steering setup, in that it adds steering effort when the Q50’s yaw rate changes, and then adjusts to increase assistance when the wheels straighten. This isn’t the top-line Q50 drive-by-wire Direct Adaptive Steering system and doesn’t include the two Sport models’ fast-ratio setup either, but it nevertheless combined sporty responsiveness with wonderfully smooth control at high speeds, while it was ultra-easy to drive around town or within confined parking garages.

You can make adjustments through the lower console-mounted Drive Mode Selector, which modulates steering, suspension and drivetrain settings via Standard (default), Snow, Eco, Sport and Personal modes. All of this works wonderfully with the fully independent standard suspension, an aluminum-intensive design that combines front double-wishbones with a rear multi-link setup, along with Dual Flow Path shocks and stabilizer bars at both ends.

While performance is important in this class, fuel economy is becoming more of an issue due to rising pump prices. To this end Infiniti should be lauded for developing such a powerful engine that makes such a small environmental footprint, the as-tested Q50 3.0t AWD good for a claimed 12.4 L/100km city, 8.7 highway and 10.8 combined. Of course, the 2.0t AWD is thriftier still at just 10.7 city, 8.6 highway and 9.7 combined, and the as yet unmentioned Q50 Hybrid AWD better yet at 9.1, 7.7 and 8.5 respectively, but that’s a different story for another time.

Any talk about the Q50 interior I tested will shed light on changes made to the Hybrid, mind you, not to mention other grades within the range, starting with the redesigned steering wheel that looks and feels sportier than the outgoing version. It’s ideally shaped with well-placed, more defined thumb spats, plus its inner baseball-style stitching provides better grip. It also seems as if it’s finished in a higher grade of leather, while its spokes are thinner for a more sophisticated look, and the switchgear attached impresses as well. The shift knob is new too, with a more ergonomic design, nicer leatherwork, double stitching, and higher end detailing that even includes an Infiniti logo on top, although none of this will be new if you’d spent time in last year’s all-new Q60 sport coupe.

It only makes sense that changes made to the Q60 would find their way to a car that has always shared much of the Q50’s underpinnings and cabin detailing, and being that the two-door coupe thoroughly impressed us during our multiple tests you should be able to guess that the rest of our 2018 Q50 3.0t AWD Luxe tester’s cabin didn’t disappoint either. For instance, the four-door model gets double-stitched padded leatherette on the instrument panel, while this luxury-oriented grade features gorgeous maple hardwood inlays that look and feel more naturally genuine than previous attempts.

Additionally, my tester’s beautifully finished leather upholstered seats were some of the best ever installed in a Q50, likely due to Infiniti’s new “spinal support” design that ideally cupped the backside while comfortably supporting the upper legs. Their standard eight-way power-adjustability made it easy to get comfortable too, while the optional powered steering column and proximity-sensing key-controlled memory settings automatically reselected my ideal driving position on startup.

Moving up from the 2.0t to the 3.0t Luxe not only provides more power under the hood but also a handful of additional features such as remote engine start, Infiniti InTouch navigation that proved easy to operate and totally accurate, the Infiniti InTouch Services suite of digital alerts and remote services, voice recognition for audio, SMS text and vehicle info, power-adjustable lumbar support for the driver, and 60/40 split-folding rear seatbacks with a centre pass-through (which are optional on the base car).

My tester also came with the $3,800 ProACTIVE package that adds an auto-leveling Adaptive Front Lighting System (AFS) that “bends” the headlights to improve night visibility around corners, High Beam Assist (HBA), Intelligent Cruise Control (ICC) with Full Speed Range, Distance Control Assist (DCA), Lane Departure Warning (LDW), Lane Departure Prevention (LDP) with Active Lane Control, Blind Spot Intervention (BSI), and Infiniti’s Eco Pedal. The only other option was $650 Asgard Grey paint, which when combined with everything else pushed the base Q50 2.0t AWD price of $39,995 before freight and fees up to $52,920, which is still an excellent value when compared to competitors with similar features. And by the way, I found all of my pricing info for the 2018 Q50 and its competitors on CarCostCanada.com, a great resource for car pricing and so much more.

I noted a number of improvements to the Q50 interior earlier, but neglected to mention that along with the stitched leather-like dash-top and instrument panel, Infiniti also finished the lower console sides in the same luxurious treatment, protecting inside knees as part of the process. They didn’t go so far as to add soft-touch synthetic to the mostly unseen lower instrument panel under the knees, which almost never comes in contact with anything and therefore is rarely upgraded, or for that matter the lower door panels that are done better by some D-segment competitors, but the glove box lid was given a dose of the good stuff for a nice upscale feel.

Possibly more important in this category are digital interfaces, and to this end I think Infiniti has an advantage over some of its closest rivals due to dual tablet-style centre stack infotainment touchscreens. A number of Q50 competitors are still held back by only offering old-school lower console-mounted rotating knobs, buttons, or touchpads. Infiniti still includes a beautiful knurled metal dial with a few surrounding buttons for those who’d rather get their info this way, but let’s face it, our world has become a lot more comfortable applying finger gestures directly to touchscreens, so kudos to Infiniti for being ahead of the curve in this all-important area and delivering an impressive interface as well.

Both vertically stacked Q50 displays are touch-capacitive, which allows easy use of multiple functions simultaneously, such as the top screen for navigation mapping and the bottom for audio control. Infiniti’s appropriately named InTouch system also lets driver and front passenger customize the car’s inner environment by storing detailed personal information for multiple drivers, such as memory seating and mirror positions, identifiable via individual proximity-sensing I-keys.

If I could fault the Q50 interior I’d have to point to the mostly analogue primary instrument package that, despite having a large, highly functional colour multi-information display at centre, doesn’t provide the wow factor of Audi’s optional Digital Cockpit or a number of other fully configurable TFT gauge clusters. It’s certainly bright, colourful and attractively laid out, while providing superb legibility day or night, but buyers in this class want the best and brightest, literally, so Infiniti will want to address this issue with something more cutting edge soon.

One small negative after a lengthy list of positives is a fair way to end this 2018 Infiniti Q50 review, but we should also take into consideration that anyone buying a near-base competitor won’t be enjoying a fully configurable TFT gauge cluster either. Such fanciful features are relegated to top-tier trims across the industry, and despite my tester’s bevy of standard features, impressive finishing and strong performance, this 3.0t Luxe trim is more or less base. For these reasons and more, I recommend you experience this car firsthand.