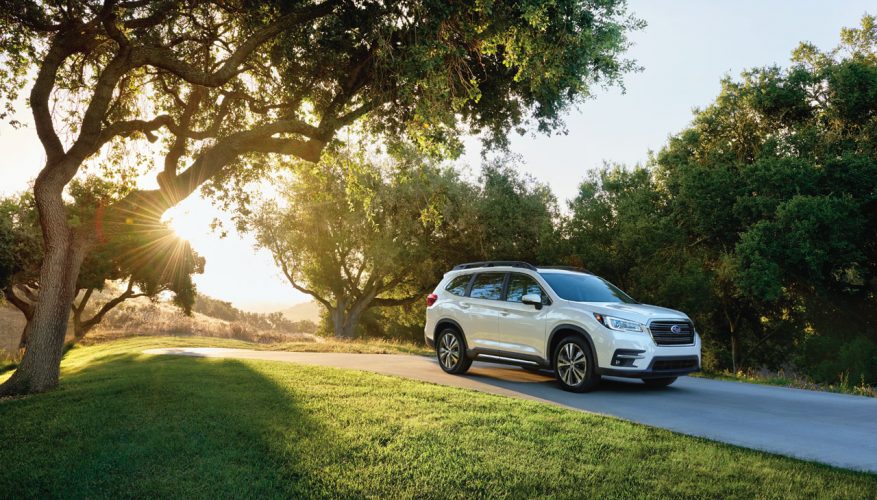 The all-new 2019 Ascent is the biggest thing to ever hit a Subaru dealership, and it will arrive this summer for just $35,995 plus freight and fees.

Subaru has taken a very different approach with the new Ascent when compared to its previous attempt at pulling in mid-size SUV buyers. The Tribeca (2005–2014), while nicely finished and very competent from a performance standpoint, suffered from controversial styling and rather cramped rear quarters, whereas the Ascent pulls its design from the Japanese brand’s very successful current Forester and Outback playbook, albeit with a bolder, larger grille and longer, taller profile, while it’s anything but short on size.

To put this into perspective, the new Ascent is 48 mm (1.9 inches) shorter than the best-selling Explorer, albeit with a 24-mm (0.9-inch) longer wheelbase, while some might also be surprised to find out that the new Subaru is 42 mm (1.6 inches) taller than the sizeable Ford. The only Explorer measurements to exceed the Ascent relate to width, which show the blue-oval SUV a considerable 119 mm (4.7 inches) wider with 66 / 71 mm (2.6 / 2.8 inches) more front / rear track respectively. This said the Explorer is one of the mid-size segment’s largest SUVs.

Of more importance to most mid-size SUV shoppers will be passenger volume and cargo space, which measure 4,347 litres (153.5 cubic feet) for the former and 2,449 litres (86.5 cubic feet) for the latter in the Ascent, when both rear rows are laid flat. These figures compare well against key rivals, with Ascent passenger volume even exceeding the massive Explorer’s and its standard eight-occupant seating configuration a rarity in the class, while the big Subaru’s maximum cargo capacity is amongst the segment’s most accommodating too. Rear passenger access should be easy as well, thanks to rear doors that open to 75 degrees.

Being a Subaru SUV the Ascent includes standard all-wheel drive, which proponents will argue is one of the most capable systems available. The engineering behind Subaru’s full-time Symmetrical AWD starts with its overall chassis layout, which ideally distributes weight thanks in part to the even balance and low profile of the longitudinally mounted, horizontally opposed flat “boxer” engine. When combined with the full-time nature of Subaru’s AWD system, plus more torque being applied to the wheels with the most grip, which not only enhances traction but improves control, the Ascent should be plenty capable no matter the road or trail surface, while its standard X-mode off-road system, complete with hill descent control, joins a generous 220 millimetres (8.66 inches) of ground clearance for a confidence-inspiring lift over obstacles, snow banks and more.

Power comes from a new turbocharged 2.4-litre four-cylinder engine, which is once again a horizontally opposed design. The powerplant makes a robust 260 horsepower and 277 lb-ft of torque, the latter maximized between 2,000 and 4,800 rpm, all of which should answer why Subaru chose not to utilize the 3.6-litre H-6 used in top-line Outback trims. In fact, the new four-cylinder produces 4 more horsepower and 30 additional lb-ft of torque than the six, so we should probably expect this new four to replace the upgraded engine in that Outback and soon find it in other Subaru models as well.

Of course, the new 2.4-litre four should be more efficient than the larger displacement H-6 too, but not because of its transmission. Both make use of Subaru’s High-torque Lineartronic CVT (Continuously Variable Transmission), considered to be one of the more efficient types of transmissions available and ideal for mid-size crossover SUV applications thanks to smooth, linear power delivery.

Subaru will also add a standard set of steering wheel paddle shifters to improve driver engagement, along with an eight-speed Manual Mode featuring sportier driving characteristics and standard Active Torque Vectoring, first introduced on the WRX and WRX STI performance models, so expect the Ascent to be enjoyable to drive despite its large mid-size dimensions.

Additionally, the Ascent promises car-like ride and handling due to the use of the new Subaru Global Platform (SGP), which combines rigid yet lightweight unibody construction with a fully independent MacPherson strut front and double-wishbone rear suspension system, enhanced further by a stabilizer bar mounted directly to the body at the rear and electric rack and pinion steering up front. Lastly, 18- or 20-inch alloy wheels get added depending on trim.

Limited trim, available for $46,495 in the eight-passenger layout and $46,995 in the seven-passenger configuration, adds the larger 20-inch alloys, steering-responsive LED headlights with high beam assist, a heatable steering wheel, and a 6.3-inch colour multifunction display that shows the time, temperature and dynamic features such as an inclinometer, while a navigation system with detailed mapping is included within the infotainment display, and additional Limited features include a 14-speaker Harmon/Kardon audio system, a four-way power-adjustable front passenger seat, leather upholstery, heated second-row outboard seats, integrated rear door sunshades, third-row USB ports, and more.

“It’s no secret that SUVs are extremely popular these days, but we wanted to offer more than just another option — we wanted to offer a class-leading vehicle that delivers what Canadian customers are looking for,” said Yasushi Enami, chairman, president and CEO of Subaru Canada, Inc. (SCI). “We believe the 2019 Ascent delivers that and more, and we’re very excited to bring this North American-exclusive model to market.”

The 2019 Subaru Ascent, produced in North America at Subaru of Indiana Automotive, Inc., will arrive at your local Subaru dealer this summer.