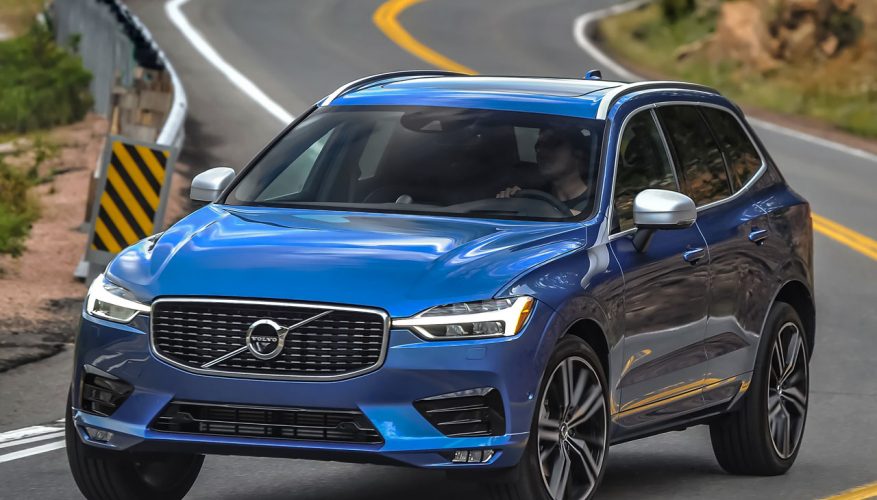 Volvo has become the darling of the North American Utility of the Year award program in recent years, having just won last year with its then new XC90 mid-size SUV, but now it’s the redesigned 2018 XC60 compact SUV’s turn to be honoured with the prestigious title.

Like the previous winner, the sharp looking 2nd-generation XC60 represents a completely fresh approach for Volvo and a much more competitive entry within the compact luxury SUV segment.

“The Volvo XC60 raises the bar for safety and driver assistance systems in compact utility vehicles, and does it in a package that exudes Scandinavian design,” said Mark Phelan, president of the North American Car of the Year Awards organization.

It’s true, Volvo is one of few models in the compact luxury SUV segment to include autonomous emergency braking and lane keeping assist as standard equipment, while additional standard safety gear include full LED headlamps, a backup camera with dynamic guidelines, a driver’s knee airbag, and more. On top of these advanced features, the new 2018 XC60 can be upfitted with automatic high beams, adaptive cruise control, blindspot monitoring with rear cross-traffic alert, road sign recognition, and new Pilot Assist, which is Volvo’s highly advanced semi-autonomous driver assistance system that manages steering, acceleration, and braking on well-marked roads up to 130 km/h (80 mph).

Like in previous years, the 2018 North American Utility of the Year was chosen by a jury of 60 professional automotive journalists from the US and Canada who provide content for independent print newspapers and magazines, TV and radio stations, plus websites. The results of their findings were presented at the North American International Auto Show in Detroit earlier this month. The award, which also includes a Car and Truck of the Year, honours “excellence in innovation, design, safety features, performance, technology, driver satisfaction and value,” stated a press release.

“We are so proud the XC60 has won this prestigious award,” said Anders Gustafsson, President and CEO of Volvo Cars USA. “It is a very tough competition and we thank all the judges for recognizing the great style, technology, and engineering in the XC60. All car shoppers should take a test drive to see for themselves how great it really is.”

It appears a lot of Canadian consumers have done just that since the new 2018 XC60 was introduced in August last year. Prior to that XC60 annual deliveries had been hovering between 1,500 to 1,700 unit sales for years, but despite only being on the market for five months the new redesign helped push XC60 sales up to 2,315 deliveries for 2017. More specifically, year-over-year XC60 sales were up 41 percent in August, 140 percent in September, 290 percent in October, 264 percent in November, and 251 percent in December. The importance of this growth can’t be underestimated, as the XC60 represented 30 percent of the Swedish brand’s worldwide sales before the redesigned version arrived, so therefore the new model’s uptick in popularity will be a boon to the Volvo brand overall.

This won’t stop us from guessing that the smaller, lighter XC60 T8 eAWD will be slightly thriftier on fuel than larger, heavier mid-size XC90 T8 eAWD, an SUV already rated at 10.1 L/100km city, 8.8 highway and 9.5 combined. This said, when factoring in regular charging an owner could potentially drive the XC90 T8 eAWD every day without ever needing to fill the gas tank, although its official Le/100km (gasoline litres equivalent per 100 kilometres) rating is more conservatively estimated at 4.7 combined city/highway. A slightly better rating should be achievable with the new XC60 T8 eAWD.

While the new 2018 XC60’s powertrain lineup might be reason enough to earn it North American Utility of the Year status, its many other attributes combine for a truly special compact SUV. Its styling, which combines key design cues from its larger XC90 sibling as well as other recently redesigned Volvo models, also has some completely new elements of its own, while its uniquely rich interior design and execution raises the bar in the compact luxury SUV segment.

Its 965 millimetres (38 inches) of rear legroom is best in class as well, while its 731 litres (25.8 cubic feet) of cargo capacity behind its 60/40-split rear seatbacks and 1,792 litres (63.3 cubic feet) of maximum luggage space make it one of the easiest to live with in its segment. Additionally, the XC60 comes standard with a convenient rear centre pass-through that lets rear passengers enjoy the more comfortable outboard seats while longer cargo, such as skis, get stowed down the middle.