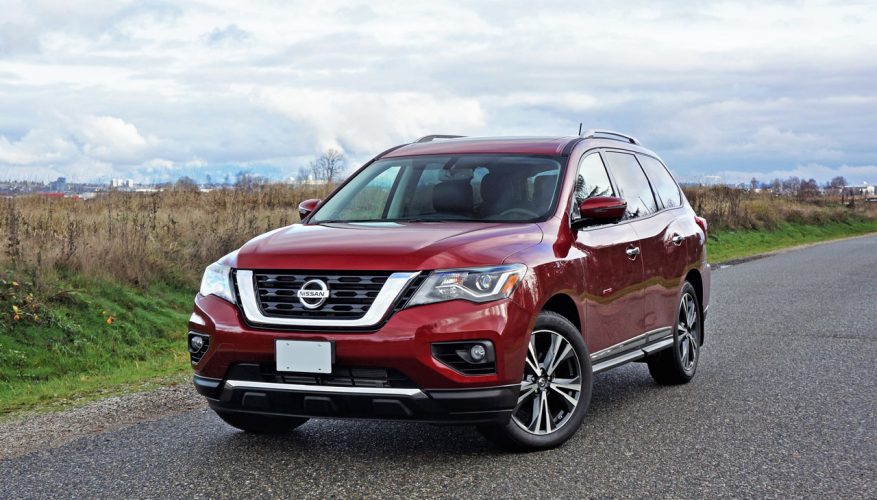 By: Trevor Hofmann
Nissan gave its mid-size seven-passenger Pathfinder a mid-cycle update last year, giving it more of a traditional SUV design, increasing power and sharpening up its driving dynamics to good effect. The result has been positive, with 1.7 percent more Canadians choosing it over a competitor in calendar year 2017 than during 2016.

Other three-row competitors that grew their 2017 sales include the best-selling Ford Explorer that went from 15,275 units to 17,333 for a 13.5 percent gain despite no changes until year end, the Kia Sorento that grew from 15,466 units to 15,990 for 3.4 percent growth despite having no notable updates, the Honda Pilot that continued to deliver fewer units than the Pathfinder at 8,905 in 2017 compared to 7,279 in 2016 yet nevertheless achieved 22.3 percent growth without any changes, the Dodge Durango that edged up from 6,266 to 6,505 units for a 3.8 percent improvement after merely adding a low-volume high-end performance trim, the GMC Acadia that passed its Chevrolet Traverse cousin thanks to a complete redesign that improved its lot from 3,939 units to 5,380 for 36.6 percent growth, the Traverse that waited until late last year to change for 2018 and therefore only improved its standing slightly from 4,486 to 4,710 units for a 5.0 percent gain, the all-new Volkswagen Atlas that went from zero to 4,534 deliveries for 100 percent growth, and finally the mostly unchanged Mazda CX-9 that catapulted from 2,444 units in 2016 to 3,943 in 2017 for a 63.3 percent increase. In other words, only 1.7 percent growth after a significant mid-cycle update isn’t exactly celebratory for the Pathfinder. At least it didn’t lose ground like it has in the U.S., over three consecutive years no less.

Still, the Pathfinder checks off a lot of mid-size SUV boxes for today’s active family. For starters it’s big on safety, especially this 2018 model that adds standard forward collision warning with autonomous emergency braking to a bevy of active and passive safety features that were already part of the basic package, whereas blindspot monitoring with rear cross-traffic alert is standard in the second of four trims. Also standard across the line, a new rear seat alert reminds of any forgotten valuables in back when leaving the vehicle, this especially important for children and pets.

Other 2018 Pathfinder news includes a new Midnight Edition package that builds on third-rung SL Premium trim and therefore sits just below the Platinum model being covered in this review. Other than commenting on its mostly black trim including the side mirror caps, window surrounds and rear rooftop spoiler, plus its glossy black 20-inch alloys and reasonable $1,000 cost that’s all I’ll be saying here, although now that I’ve touched on trim levels I should cover available 2018 trims, which continue forward with the $32,998 base S, the $39,698 SV Tech, the aforementioned $45,198 SL Premium, and top-tier $48,998 Platinum.

Same as last year, all 2018 Pathfinders come standard with Nissan’s well-proven 3.5-litre V6, which was bumped from 260 to 284 horsepower and 240 to 259 lb-ft of torque for the 2017 model year, yet nevertheless manages the best fuel economy amongst six-cylinder competitors at 11.6 L/100km city, 8.5 highway and 10.2 combined in standard front-wheel drive trim, 12.1 city, 8.9 highway and 10.7 combined with AWD, plus 12.4 city, 9.2 highway and 11.0 combined in as-tested Platinum AWD guise. This stingy efficiency may have something to do with its standard continuously variable transmission (CVT), an extremely efficient design that provides ultra-smooth operation and reasonably realistic stepped “gear” ratios for a more natural automatic feel.

The Pathfinder doesn’t include paddle shifters or even a manual mode, which is fine by me as this is the type of transmission that’s best left to its own devices, an “L” for low gear selection the only alternative next to the usual “PRND” selections, although take note that a rotating selector branded “i-4×4” to denote Nissan’s Intelligent 4WD system lets you choose between 2WD, AUTO, and LOCK, the latter for getting out of deep snow, mud, sand, or other types of slippery situations. This said the current Pathfinder is no longer a true off-road capable SUV, the model having left its rugged 4×4 persona in the past for model year 2013 when the current generation took on a more refined, roomier, more family- and fuel-friendly unibody car-based crossover SUV design.

This means today’s Pathfinder is more capable of comfortable city and highway cruising, not to mention more stable in fast-paced corners, especially since its update last year, its fully independent suspension now slightly firmer, albeit still plenty compliant for a smooth, quiet ride. And this despite its sizeable 20-inch alloys wrapped in 235/55 Bridgestone Dueler H/P Sport rubber, these standard with Platinum AWD trim. All other trims get 18-inch alloys encircled by 235/65 all-seasons, which as tested previously do their job nicely, but the 20s provide better stickum in the corners for very little tradeoff in ride quality, although be prepared to pay a bit more for replacements when the time comes.

My tester was finished in beautiful Scarlet Ember paint, a $300 upgrade, pushing the final total up to $49,298 before freight and fees. While this certainly enters lower end premium territory, with an equivalent luxury-branded model, such as Infiniti’s own QX60, priced into the $60k arena, plus similarly equipped European models tens of thousands higher, it’s by no means inexpensive. Of course, for the extra coin you’d be getting a much more refined interior with higher grade materials including greater use of soft-touch synthetics, real woods and metals, fabric-wrapped roof pillars, and more features, especially advanced driver assistance systems that are missing from this Pathfinder, such as auto high beams, lane departure alert and mitigation, semi-autonomous self-parking, etcetera. The Pathfinder doesn’t even measure up to many of its mainstream market peers when it comes to these features, not even offering front parking sensors, while its materials quality, especially with respect to switchgear, is a bit below par.

It’s large and accommodating, though, and as noted the EZ Flex second-row seats make it one of the easiest to get kids in and out of. What’s more, second-row roominess and comfort is impressive, while I was even able to sit in the very back without feeling claustrophobic. I slid the second-row as far rearward as possible and was still able to squeeze in without issue, which is pretty good considering my five-foot-eight height and small-to-medium build, but pull the middle row farther forward and there’s plenty of space left over for someone larger to move around easily.

As for cargo capacity, the Pathfinder offers up more rear load space than many of its rivals at 453 litres (16.0 cubic feet), while if you drop the rearmost 50/50-split seatbacks down you’ll have 1,201 litres (42.4 cubic feet) available along with a relatively flat load floor. Better yet, lowering the 60/40-split second-row results in 2,260 litres (79.8 cubic feet) of maximum gear-toting capability, making the Pathfinder ideal for the most active of lifestyles.

In the end, the 2018 Pathfinder remains one of the better mid-size three-row family haulers in the Canadian market, with attractive styling, great all-round functionality, good straight-line performance, decent handling, impressive fuel economy, and more top-tier features than most will need. Still, for those wanting a premium experience from a volume brand this Platinum model falls a bit short when it comes to features and finishing, which might be why its sales uptick wasn’t as strong as others in the class last year.
©(Copyright Canadian Auto Press)
Car Shopping Tools