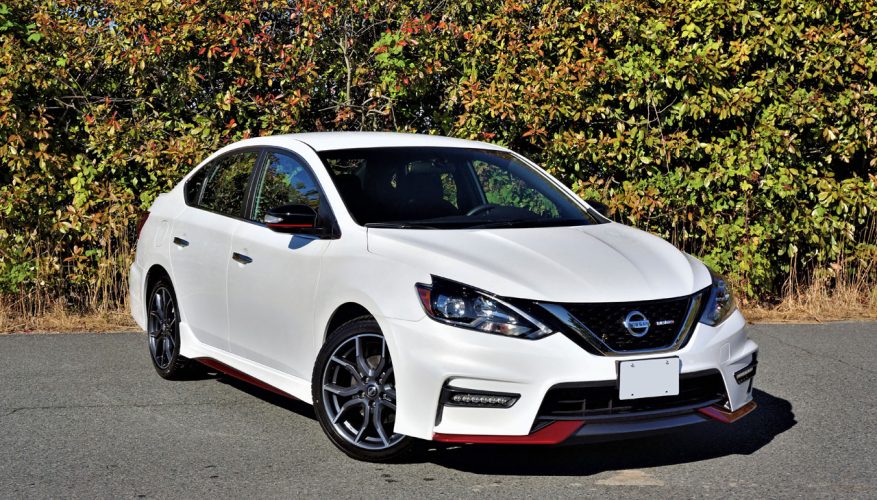 By: Trevor Hofmann
Nissan surprised me with a much more enjoyable Sentra SR Turbo last year, and then they went a step further by bringing out the Nismo.

Compared to the SR Turbo, this Nismo is a boy racer’s dream, but I must admit it’s a bit too youth-oriented for my almost 55 year-old mindset. I appreciated the subtleness of the metallic grey-painted SR, and that said wouldn’t have minded a full white version, but the Aspen White pearl and wine-red colour scheme of this Nismo, plus all of the aero body cladding, pushed it a bit too over the top for me, especially when grafted onto a design that’s not inherently sporty.

Some features that seem somewhat out of place on a sport model include the broad chrome grille surround, chromed side window trim, chromed door handles, and chromed trunk applique. Normally sport trims coat these pieces in body-colour, black or at least really dark chrome. I’m not saying Nissan was wrong to include all the metal brightwork, because there is no right and wrong when it comes to style, but it’s uncharacteristic of a sport model.

On that note, Nissan upgrades the Nismo with a more aggressively tuned sport suspension featuring increased spring and damper rates that I really felt through the corners. I already loved the SR Turbo, so as you can imagine the Nismo was that much more engaging. Like that SR Turbo, the highly intelligent powers that be at Nissan’s press relations department left the standard six-speed manual in place so as to provide ultimate control through those corners and off the line (a CVT with manual-mode is optional), which certainly made the most of the 188 horsepower and 177 lb-ft of torque on tap. Yes, that’s identical output from the same engine as the SR Turbo, a 1.6-litre turbo-four that loves to rev all day long.

It feels strong off the line and sounds fabulous as it winds up to and slightly beyond its 6,400 rpm redline, while grip through the corners was plentiful for lots of fast-paced fun. It understeers slightly, as can be expected from a front-drive car, but it was never unwieldy even when pushed hard, while the suspension responded well to dips and bumps that regularly unsettle lesser compacts. The Nismo isn’t overly harsh either, but rather Nissan has found a nice balance between performance and comfort, which is actually true for its approach to the entire car.

The Sentra Nismo’s cabin is very appealing, because the red and black colour combination and some of the detailing is particularly well done. Most noticeable are the microsuede Nismo seats with superb side bolstering and extreme comfort. They’re finished with solid microsuede centres and perforated bolsters, the latter and headrests featuring red backing showing through the perforations as well as red stitching. There’s more red stitching on the microsuede and leather-wrapped steering wheel to match that on the leather-wrapped shifter knob and boot, while the steering wheel also gets a unique red leather stripe at its top-centre position, matching the red ring around the special Nismo tachometer, the bright red ignition button, and red metallic trim on the otherwise carbon-style centre stack and lower console surface treatment. There’s more carbon-like surfacing on the doors, as well as red stitching on the door armrests. Are you following the theme here?

The interior is finished quite well, with a soft touch dash top that wraps right down to the halfway point of the instrument panel ahead of the front passenger. It doesn’t do the same around the primary instruments in front of the driver, but that’s not the norm in the class anyway. Out of the norm are hard plastic door uppers, this also the case for every other interior surface other than the wonderfully plush door inserts and armrests that are finished in the same microsuede as the seats, excepting the centre armrest that’s done out in padded leatherette. It’s a bit of a mishmash of textures and materials, but it works well.

Switchgear is mostly good, although this compact segment has seriously improved as of late, with the Sentra appearing as if it’s fallen behind. Nissan did a fairly good job of upgrading the primary instruments that feature a large multi-information display at centre, with mostly blue and silver-grey colouring, but rather than a full MID it’s more of a trip computer with some rudimentary system information.

More detailed info can be found within the infotainment touchscreen, but this is looking somewhat dated too, with analogue switchgear down each side as well as a CD player and SD card reader up top. That’s a lot of kit, but the display is not as graphically stimulating as most in this class, nor as large, high in resolution or rich in contrast. The upgraded Bose audio system is excellent, mind you, and the navigation routing was very accurate.

Another surprise was that Nissan swapped out last year’s rudimentary manual HVAC interface for a dual-zone automatic climate control system. There’s a bin just below for a smartphone, plus a 12-volt socket right beside that if you want to charge up the old fashioned way, but plugging your phone into the USB port makes you stretch the cord all the way to the centre console bin under the armrest next to an aux plug. Normally USBs and aux plugs are in the front part of the console for easier access, but as you’re probably appreciating the Sentra is hardly the latest design on the compact block.

I should mention that two-way heatable seat controls are on the lower console as well, while an overhead console includes a felt-lined sunglasses holder, although as usual it with Nissan incorporates such a large nosepiece that sunglasses flop around when inside. I do like the LED reading lights, however, which are certainly a step up over this segment’s usual incandescent lamps. That said my tester’s faults included a sloppy fitting vent on the right side dash top. I tried pushing it back in place, but it wouldn’t stay so it’s probably broken inside. This type of defect is very unusual in any class of car, this being one of the only vehicles I’ve tested this year (of hundreds) with this type of a problem.

The Sentra’s forte is interior spaciousness, especially in back where there was almost a clear foot of knee room behind the driver’s seat after setting it up for my five-foot-eight frame. Headroom was also generous for the class, with about three inches above my noggin, while I had about four inches beside my left shoulder and a couple of inches next to my outer hip. Strangely, Nissan doesn’t include a flip-down centre armrest in back, while almost as unusual for a top line model, there weren’t any heated rear outboard seats, or for that matter separate rear air vents or overhead reading lights.

The back seats are nevertheless are very comfortable, with excellent lower back support, and the rear door panels featured the same soft suede-like material on their padded inserts and armrests. Likewise, the backsides of the front seats were finished in that same rich microsuede, while red stitching was used for the door armrests and seats, although they didn’t get the same perforated inserts with red backing as those up front.

On the positive, the Sentra’s trunk is extremely large at 428 litres (15.1 cubic feet), with an especially low floor that allows tall cargo to be housed within. The rear seatbacks fold 60/40 from pull-tabs on the tops of each seatback, although when folded don’t offer a completely flat load floor due to the low cargo floor. It’s a good trade-off because there’s so much more room than average in there.

Along with the upgraded drivetrain, the SR Turbo adds LED low-beam projector headlights with LED accents, LED fog lights, LED turn signals in the mirror housings, larger 11.7-inch front rotors and rear disc brakes, lower side sill extensions, a rear spoiler, a diffuser style sport rear bumper cap, a chromed exhaust finisher, an auto-dimming rearview mirror, illuminated vanity mirrors, a powered moonroof and more, while the Nismo includes all items already mentioned as well as a 0.8-inch larger 5.8-inch infotainment touchscreen, NissanConnect with voice recognition, navigation and mobile apps, SiriusXM Traffic and Travel Link, and eight-speaker Bose premium audio including two subs, although it deleted the SR Turbo’s auto-dimming rearview mirror, sunroof and rear centre armrest, while also removing the autonomous emergency braking and illuminated vanity mirrors from the SV and not allowing the blindspot warning and rear cross-traffic alert that’s optional with the SR Turbo. Unlike the SV there are no options either, other than the $1,300 CVT and my tester’s Aspen White pearl paint that adds $395-base colours include Super Black and Gun Metallic.

Yes, it’s odd to exclude features from top-line models, but Nissan obviously wants this to be a sport-focused sedan and keep its price within reason too, which at $26,198 plus freight and fees is only $3,900 more than the SR Turbo. This said the SR Turbo is already a great performing compact sedan that should also be considered by those looking for a little more zest in their daily drive, which like the Nismo won’t eat a hole in their fuel budget thanks to a 9.5 L/100km city, 7.6 highway and 8.7 combined rating with the manual, or 9.4, 7.8 and 8.7 respectively with the CVT.