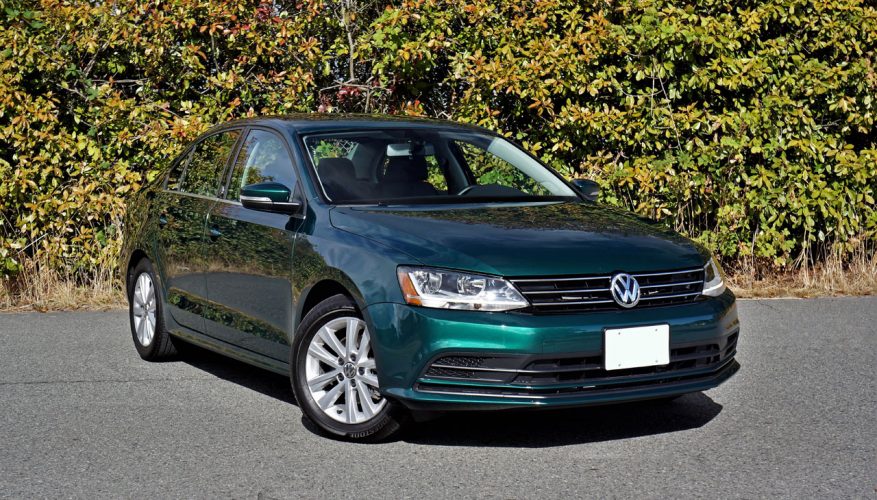 By: Trevor Hofmann
Having grown up in the sixties and seventies it’s difficult not to like Volkswagen’s retrospective editions, and while looking in the proverbial rearview mirror normally has us focusing on VW’s Beetle line of compacts, in this case I’m talking about the four-door compact Jetta. Specifically the 2017 Wolfsburg Edition, in Bottle Green with a black, grey and orange interior.

The Bottle Green paint, which is new for 2017, is probably the design element that’s most respectful of the past, as this rather normal looking three-box four-door can only be considered retro due to being mostly unchanged for so long, but peek through its windows and you’ll start to understand more of what I’m talking about.

Orange is often used to pull memories toward the late ’60s and ’70s, currently by watch brands like Omega with its absolutely gorgeous 2014 Speedmaster Mark II reissue (a near exact homage to its 1969 namesake), Rolex with its uncharacteristically playful Milgauss (in this case the white and orange dial), many of Heuer’s Monacos, and any number of Doxa Sub divers that first used the colour to face its watches after learning it worked best under water. Of course, this practice isn’t exclusive to watchmakers, but accessories producers, clothiers, furniture builders, and carmakers alike.

With respect to the Jetta Wolfsburg Edition, orange is exclusive to the seat upholstery, which, exterior paintwork aside, is the only bit of retrospective design on this model. Four vertical stripes of orange thread separate a black stripe down the centre of each seat into five black lines, while grey fabric inserts sit between woven black cloth bolsters, these receiving yet more orange stitching. The look is fabulous, especially if you’re a fan of most anything orange like me. Of course, it’s all the better when combined with the rest of the Jetta’s high-quality interior.

On that note, all Jetta models get a full soft-touch dash top and door uppers, plus nice satin-silver detailing throughout. Being a Volkswagen, such trim is executed tastefully, as is the piano black lacquered surfacing on the steering wheel and centre stack. The former item is Volkswagen’s specialty, this car featuring a nice sporty leather-wrapped rim and wonderfully thin spokes filled with high-quality switchgear.

I wish I could say something positive about the rather drab monochromatic trip computer within the Jetta’s gauge cluster (orange it’s not, or any other colour for that matter), but the centre stack-mounted infotainment interface is one of the best in the industry, if not the largest at 6.3 inches. Along with standard Apple CarPlay and Android Auto, Volkswagen adds MirrorLink smartphone connectivity as well as proximity-sensing digital buttons that pop up when your hand approaches the screen. Navigation isn’t part of the package, but a good backup camera with dynamic guidelines is, plus plenty of other functions, while just below is a nicely organized dual-zone auto climate control panel with additional controls for three-way heatable front seats that are always appreciated this time of year.

Those seats are inherently comfortable, with good lower back and lateral support, the former made even better via manual lumbar adjustment, while the steering column provided lots of rake and telescopic reach for setting up an ergonomically ideal driving position to enhance control and safety.

The rear seating area is comfortable and spacious too, while the Jetta offers one of the largest trunks in the compact segment at 438 litres (15.5 cubic feet), expanded upon via 60/40 split-folding rear seatbacks as well as a centre pass-through for loading long items down the middle.

All loaded up and ready to go, the little Jetta’s 1.4-litre turbocharged and direct-injected four-cylinder moves family and friends along with surprising energy, complemented by a well-sorted six-speed automatic gearbox with manual mode. When I say gearbox, I don’t mean VW’s much-lauded quick-shifting DSG automated dual-clutch transmission, or thankfully a CVT (continuously variable transmission) like so many others in this class provide, but a compromise I’d much rather live with from a performance perspective.

This said the Jetta’s conventional automatic isn’t quite as fuel-efficient as some of it peers, but it’s hard to knock its claimed 8.5 L/100km city, 6.2 highway and 7.4 combined rating, especially when factoring in how much fun it is to drive. You can pay less for an even more engaging five-speed manual that’s thriftier yet at 8.3 city, 5.9 highway and 7.2 combined, while the little engine just noted makes 150 horsepower and 184 lb-ft of torque from a mere 1,400 rpm, which is a lot for so little displacement.

Take off from a stoplight and it’ll leave laggards behind instantly, while unashamed merges onto the highway are not only easy to accomplish, but doing so can be smile inducing if a tight banked curve is part of the process. Like all Volkswagens, the Jetta’s performance-tuned fully independent suspension provides just that right amount of athleticism while still maintaining good ride comfort, the result of which can make even the most loathsome commutes entertaining if allowed occasional space and a decent enough location to stretch its legs.

By the way, those 16-inch Estrade alloys on Bridgestone Ecopia all-seasons are exclusive to this Wolfsburg Edition, while other features not yet mentioned include LED daytime running lights, turn signals integrated within the side mirrors housings, a rear spoiler, proximity keyless access with pushbutton ignition, rain-sensing wipers, a powered driver’s seat, Bluetooth with audio streaming, powered USB connectivity, a large powered sunroof, blindspot monitoring, a driver fatigue detection system, all the expected active and passive safety features, plus more for $23,795 plus freight and fees with manual or $25,195 as tested with with auto.

The only option with the Wolfsburg Edition is a $355 engine block heater that for some reason includes a set of front fog lights as part of the package. Of course lesser and ritzier trims are available too, the base Jetta starting at just $16,395, while additional no-cost metallic colours for this Wolfsburg Edition include Dark Bronze, Platinum Grey, Ruby Red, Silk Blue, and White Silver. A sole pearlescent colour is available too, Deep Black Pearl, and believe it or not doesn’t cost a penny more, whereas equally free solid colours include Pure White and Tornado Red.

As of January 9, 2018 there’s still no mention of the 2018 Jetta on Volkswagen Canada’s retail site and nothing in the media site we journalists use to source our info either, which is why it’s still ok to be covering this 2017 that remains available new from dealers. Whenever the 2018 Jetta arrives, however, don’t expect many changes. Instead, an entirely new 2019 Jetta will be introduced at the North American International Auto Show in Detroit on January 17, and if early artist’s renditions are anything to go by it’ll be a head-turner. Until then, the current model recently won honours amongst Kelly Blue Book’s 10 Coolest Cars of 2017, and took AutoPacific’s 2017 Ideal Vehicle Award. Not bad for a car that’s moving into its final year.

If you want a compact sedan that’s entertaining to drive and finished nicely inside, the Volkswagen Jetta should suit you well, while if you happen to be a sucker for most things orange like yours truly, this Wolfsburg Edition is ideal.
©(Copyright Canadian Auto Press)
Car Shopping Tools