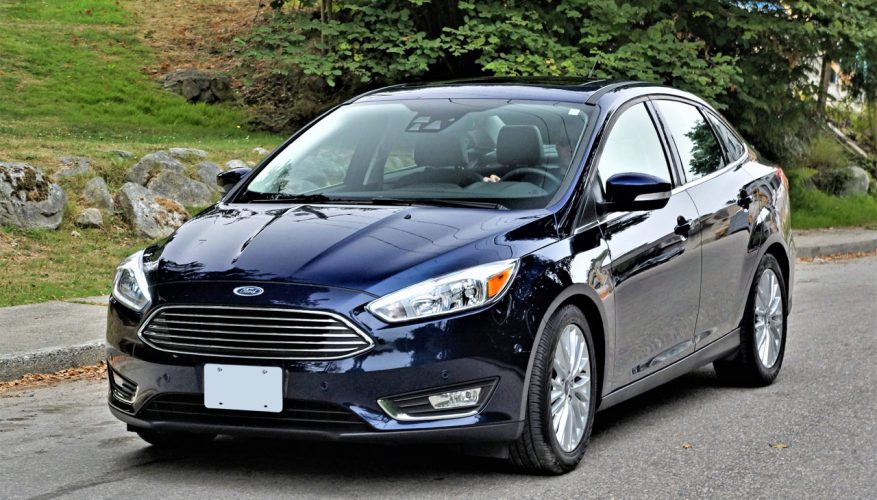 By: Trevor Hofmann
When a car nears the end of its lifecycle two good things can happen, one being discounted pricing and the other improved reliability.

The Focus certainly qualifies for the first, with Ford offering plenty of rebates and its dealers providing healthy discounts for anyone wanting a 2017 model, especially now that 2018 models are arriving. As for the second issue, the Focus continues to struggle in third-party dependability studies, with Consumer Reports saying “it’s plagued by poor reliability and, at low speeds, a jerky transmission,” and J.D. Power and Associates giving it just two out of five for powertrain mechanical quality and powertrain design, plus the same low score for body and interior mechanical quality. Yikes!

Fortunately the Focus gets mostly good customer reviews, but even reasonable customer satisfaction hasn’t been enough to keep it selling well in recent years. Let’s face it, you need to update a car every once in a while, especially when the market segment you’re competing in is so incredibly competitive. Only five years ago the Focus found 27,936 Canadian buyers, which wasn’t close to the 2012’s compact class leading Honda Civic’s 64,962 sales, but respectable. Focus sales fell to just 16,627 units last year while Civic kept steady at 64,552 deliveries, although over the first 11 months of 2017 the Focus has dropped to just 11,306 units while Civic moves into record territory with 66,935 sales.

And if you think this is just a Civic phenomenon and that strong compact SUV sales are the major cause of the Focus’ problems, Kia’s Forte has made such strong gains this year that it’s already at 15,605 units and thereby moves up two notches to overtake Focus sales, whereas the Subaru Impreza’s 14,350 YTD sales also moves it up two positions and the Nissan Sentra’s 13,296 sales as of November’s close, despite being slower than last year, allows it to bypass the Focus too. VW’s Golf also made significant gains this year with 23,137 units so far, while Hyundai’s Elantra and VW’s Jetta have lost ground.

Most consumers want the newest product in a given sector, and that’s not the Focus. It’s only received one minor mid-cycle upgrade since the current third-generation was introduced in early 2011. That’s nearly seven years without any significant updates, and frankly the car was starting to look dated a couple of years ago. I personally prefer the pre-facelift design that had its own unique character, rather than the current Aston Martin wannabe façade that’s akin to mounting a Rolls-Royce grille on a VW bug. At least my brother liked it.

My partner Karen and I drove a few relaxed highway hours to his place in wine country, a much-needed weekend getaway that provided a good opportunity to stretch the Focus’ legs and keep my budget intact thanks to its miserly fuel economy, the Sedan Titanium good for a claimed five-cycle rating of 9.2 L/100km city, 6.6 highway and 8.0 combined. My bro just recently purchased a new Honda Civic in top-line Touring trim, and despite owning what most consider the best car in the compact class, was quite impressed with this Focus Sedan Titanium’s outward styling and inner design.

The truth of the matter is, the Focus was extremely advanced when it arrived on the scene all those years ago, and therefore is still one of the better cars in its class for perceived quality and electronics interfaces. Perceived quality is an industry term for touchy-feely refinement, i.e. soft touch premium plastics, switchgear that’s substantive feeling and well damped, door, floor, ceiling and bulkhead insulation that keeps wind, road and engine noise to a minimum, and other difficult to quantify attributes. The Focus does a very good job of these, while the 4.2-inch multi-information display between the sporty dual-dial motorcycle-style primary instruments is extremely high in resolution, rich with colour and contrast, plus full of information. Likewise for the large infotainment system atop the centre stack, which is still one of the best in the industry.

I probably shouldn’t use the word still, because Sync 3 only came out a couple of years ago and merely arrived in the Focus for the 2016 model year. It’s one of the best in the industry offering a large 8.0-inch high-resolution touchscreen display, truly artful graphics design, tablet-style pinch and swipe capability, Apple CarPlay and Android Auto smartphone connectivity, extremely easy Bluetooth setup, excellent available navigation mapping and accuracy, available voice recognition that works, a superb standard backup camera with dynamic guidelines, and so much more. Titanium trim’s dual-zone auto climate control makes the car nicer to live with year round, while the 10-speaker Sony audio system provides great sound quality, which was much appreciated on our road trip.

Adaptive cruise control would’ve been at least as enjoyable during the six hours of highway driving if available, mind you, although my tester’s auto high beams, which come as part of the $750 Technology Package, made a difference during the evening return trip. That upgrade also includes blindspot monitoring, lane departure warning, and rear cross-traffic alert, but so far no autonomous driver assistance systems have been added, such as forward collision warning with emergency braking, lane keeping assist, and the list goes on, although my tester did include $400 semi-autonomous parallel parking.

Due to these shortcomings you won’t see the Focus on the IIHS Top Safety Pick + list or even amongst those without the +, but it does score well for safety with best-possible IIHS “Good” scores for moderate front overlap, side, roof strength, plus head restraint and seat crash tests, a second-best “Acceptable” score for the driver in the small front overlap crash test, and another Acceptable rating for LATCH (child seat fastener) ease of use. It achieved these same ratings in 2016 and the mostly unchanged 2018 model gets the same result, while all but the LATCH rating remains identical from 2015 all the way back to 2012. Likewise for the NHTSA, which gives its best five-star safety rating to both the Focus Sedan and Hatchback.

Titanium is the ritziest Focus model available in the Sedan lineup, with additional trims including the $17,578 base S, $20,298 SE, and $24,088 SEL, the top-line Titanium priced at $26,908. I’ve mentioned a couple of upgrades already, with additional features added to my tester including an $800 navigation system and a $100 block heater.

While I could complain about a lack of cooled front seats or heated rear outboard seats, no driver’s memory or any number of other items that are not available with this fully loaded Focus Sedan Titanium, Ford has the majority of key features covered, while I can add driver’s seat comfort to the list. Let’s remember that along with a week in mixed city/highway driving I took this car on two three-hour stints with just two breaks between each, one for gas and the other for food (ok, I admit we enjoyed one last winery 30 minutes out of town). Not only was the Titanium’s driver seat superb, but its leather is very high in quality for this class. The Focus is set up well ergonomically too, with plenty of seat and steering wheel adjustability.

The rear seats are also comfortable and quite sizeable for someone under six-foot-two or so. I had lots of legroom, with about five or six inches in front of my knees when the driver’s seat was set to my five-foot-eight frame, plus plenty of space for my feet and more than enough side-to-side room, as well as about three inches above my head.

On the road, the Focus Sedan Titanium’s one-size-fits-all 2.0-liter four-cylinder provides strong performance for the class thanks to 160 horsepower and 146 lb-ft of torque, which made for good off-the-line acceleration with Sport mode engaged and decent highway passing power. The Focus is impressive through corners too, thanks to a fully independent suspension consisting of MacPherson struts up front and a Control Blade setup with a stabilizer bar in back, plus Torque Vectoring Control that automatically applies braking to the front inside wheel so that more power goes to the more adherent outside wheel. While agile the Focus’ ride quality is good for the class, the car comfortable and relatively quiet too.

Addressing complaints about the “jerky” transmission, that’s really not the main gearbox issue for me. I like that the Focus’ six-speed PowerShift automatic is more advanced than most peers, its dual-clutch automated design normally only found in top performance models of pricey premium brands, but for the most part it was smooth enough through town and even better on the highway. Unlike so many other transmissions it’s ultra quick to downshift when more power or increased engine braking is needed, which is a real bonus when it comes to performance, but possibly a flaw with respect to fuel economy.

This day and age, with what seem like ever-rising fuel costs, a sporty powertrain isn’t necessarily seen as a positive. While traveling down the highway at 120 km/h with cruise control engaged, the Focus would constantly downshift into the 4,000 to 5,000 rpm range in order to maintain the cruise control, which isn’t a completely unusual scenario albeit quite bothersome to manually upshift if you’re trying to save fuel. That it also downshifted sporadically around town when cruise control wasn’t a factor was more of a problem, again causing more manual intervention than should be needed.

Of course, if the Focus housed a continuously variable transmission (CVT) like so many of its peers I’d now be complaining about lethargic performance and mushy “gear” changes, so I should just be happy with the crisp cog swapping and excellent straight-line performance that ensued, instead of grumbling about a gearbox with a mind of its own.

But is the Focus the right car for you? As noted earlier, more and more Canadian buyers are voting no with their wallets, but before you relegate this “well proven” car to the past, consider that poor sales can translate into great deals. Right now Ford is advertising a base price of $13,898 plus freight and fees, which is ridiculously low for such a well engineered compact. They’ve got this 2017 Focus Sedan Titanium model on sale for $23,408, which is pretty good value as well. Getting the latest and greatest doesn’t normally result in the best value proposition, so you may want to spend a little time in a Focus before writing it off.
©(Copyright Canadian Auto Press)
Car Shopping Tools