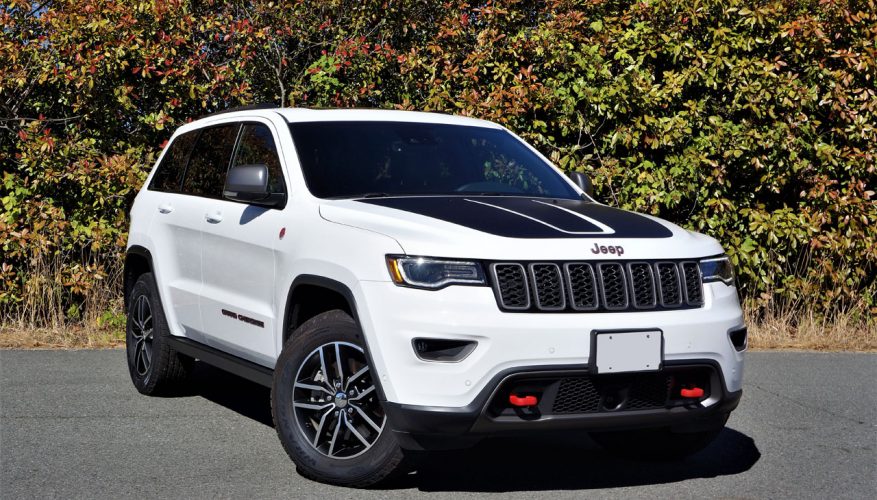 By: Trevor Hofmann
Some things make perfect sense, and adding the sporty Trailhawk package to the flagship Grand Cherokee is one of those things.

The Trailhawk follows the latest SUV trend of blackening most everything that was previously chrome, plus it goes one step beyond by almost completely covering the hood with a matte black decal. Other unique details include black “GRAND CHEROKEE” block lettering overtop a red shadowing effect on each front door, plus two red tow hooks set into the black mesh and dark grey centre fascia vent, red “Trail Rated” badges on each front fender, unique machine-finished twinned five-spoke 18-inch alloys with matte black painted pockets, a tiny portion of each detailed out with a little red WWII Willys silhouette, as well as matte grey taillight trim, the same matte grey used for the red shadowed “Jeep” logos front and rear, and finally a big red winged Trailhawk badge (that kind of reminds me of the original Ford Thunderbird emblem) on the bottom-right corner of the rear liftgate. The black decaled look pulls distant memories of the original Cherokee Chief from the 1974–1983 SJ era.

Any semblance to that classic Cherokee is quickly forgotten once inside, with only the Jeep badge on the steering wheel hub in common. The Trailhawk is no entry-level trim, as seen by its plush surroundings and upscale features. At $52,995 it sits square in the middle of non-SRT models, with the $39,695 Laredo and $47,995 Limited below, plus the $56,845 Overland and $61,845 Summit above. Yes, the Grand Cherokee nudges up against the mid-size premium SUV segment, the just noted SRT starting at $67,695, but unlike some wannabe luxury utes this Jeep delivers in every respect.

The Trailhawk combines the Grand Cherokee’s usual near-premium quality with a sportier interior design, including a unique heatable multifunction leather-wrapped steering wheel with the red Trailhawk wings at the base of its bottom two spokes, beautiful dark grey woodgrain inlays across the instrument and door panels, plus black sport seats with leather bolsters and perforated suede centres, complete with red “TRAILHAWK” embroidery. Red stitching spices up the seats, steering wheel, shifter boot and armrest, accentuating the Trailhawk’s sporty nature.

The Grand Cherokee has long been unique amongst mainstream volume-branded models, with the 1993–1998 first-generation ZJ model attracting a very wealthy clientele that often had a premium-branded car or two in the driveway as well, the phenomenon continuing with the 1999–2004 second-gen WJ, but after Germany’s Daimler (Mercedes-Benz) took over in 1998 and results of their cooperation appeared in the 2005–2010 third-generation WK model, a cheap, hard plastic interior caused Grand Cherokee prospects to fall fast. I was on that very press launch and didn’t make many friends amongst the product development team when I quietly took a few in a new model and placed it next to the outgoing one before asking them why the new one was constructed of such poor quality, substandard plastics. I reminded them of the well heeled demographic they bragged about moments before during a morning press briefing, and how those buyers would likely shun the new model, and sure enough customer complaints followed. I’ve since learned to keep my mouth shut-even if you’re right and you don’t blurt your comments out in front of other journalists, the powers that be don’t want to hear “constructive criticism”. As it was, Daimler never fully understood the importance of Jeep’s place in the near-luxury market nor the brand’s very real premium cachet, and for this reason and many others sold off its majority stake in its U.S. brands less than a decade later. Fortunately for Jeep fans, Fiat gets it.

Yes, ironic that the iconic American brand, most noted for evolving from the U.S. WWII effort in Europe in which it aided the defeat of loosely allied adversaries Germany and Italy, would eventually be owned by companies based in these very countries, but the world spins in mysterious ways and such history, while important to remember in hopes to never repeat it, is probably best left in the past when it comes to brands and businesses. The truth be told, Fiat has been a good steward, with Jeep thriving under its leadership. Some might say it would be difficult for any sport utility to lose ground in today’s SUV-crazed market, despite Mitsubishi defying the trend, but even utility makers need to properly update their models every decade or so.

The current fourth-gen WK2 version arrived in 2011 and is still with us in heavily modified form today, the model delivering the most premium-like experience in Jeep’s long and storied history. Even this sport-oriented Trailhawk is finished to a higher level than most SUVs in its class, with very high-quality soft-touch synthetic covering the dash top and upper half of the instrument panel, this blending nicely into pliable door uppers front to rear. Jeep missed its chance to apply cloth-covered roof pillars, this made more apparent thanks to light issued by the $1,425 optional dual-pane panoramic sunroof overhead, but those who can look over this premium faux pas should be quite content in the latest Grand Cherokee. The satin-finish metallic detailing throughout the cabin is as nice as the tastefully applied chrome bits, while the various switchgear is excellent, especially the knobs and scrolling wheels that are both chromed and edged in a nice grippy rubber.

While inside I’d better go over the Trailhawk’s digital interfaces, which remain some of the best in the biz from a user-friendliness standpoint and pretty impressive as far as graphics, brightness, depth of colour and contrast go. Starting with the 7.0-inch multi-information display (MID) ahead of the driver, at first glance it appears like a fully digital gauge cluster yet further inspection shows analogue dials to each side with a big rectangular colour TFT display at centre. Jeep cleverly provides digitally rounded inner edges of its tachometer and twinned fuel/temp meters, these filled with scrolling MID prompts on the left and PRND selector info to the right, with the speed taken care of via a digital readout at the top centre position. There’s a lot more to the system, which measures up to all but fully configurable gauge clusters when it comes to electronic advancement.

The Trailhawk’s centre stack is topped off by a much larger and more functional touchscreen at 8.4 inches diagonally, filled with separate interfaces for the audio, media, climate, heated seat, phone and app systems, all simple, straight-forward and easy to use. Even the $700 optional navigation system’s routing is a piece of cake and very accurate, while the standard backup camera provided active guidelines and good clarity. Jeep provides quick-access switchgear for the audio and dual-zone auto climate control systems just below, plus a row of ancillary buttons for various features underneath. Keep looking downward and a covered door can be opened to reveal a media interface with an aux port, powered USB input, SD card reader, and 12-volt charger.

There’s no shortage of interior room front and back, plus the front seats are wonderfully comfortable with great lateral support and hooked up to three-way heat and forced ventilation. The rear seats are supportive too, especially at the lower back, while a centre armrest flips down to increase comfort and outboard seat heaters improve matters more in the cold of winter. I like the way Jeep integrates the optional rear audio/visual controls within the sides of the seats too, each interface including full RCA plugs and an HDMI 2 port. A screen flips up from behind each seatback and a remote control and wireless headphones can be found in the back pockets of the front seats, the $2,150 rear entertainment upgrade also including a Blu-Ray DVD changer.

This being a five-person SUV cargo space is good at 1,028 litres (36.3 cubic feet) litres behind the back row and 1,934 litres (68.3 cubic feet) when the 60/40-split seatbacks are laid flat, plus the front passenger seat can be folded forward as well for really long items. The cargo area is beautifully finished as well, with quality carpeting on the load floor, up each sidewall and on the seatbacks, two metal protector plates on the liftgate sill and four metal protectors along the floor, chromed tie-down hooks at each corner, a chromed rim around the subwoofer grille, two grocery bag hooks, a 12-volt charger, a removable storage bin, a pop-out LED flashlight, etcetera, while a full-size spare gets surrounded by handy storage bins below. The negative was a retractable cargo cover that wasn’t easy to remove.

Open up the hood at the other end and you’ll see Jeep’s big 5.7-litre Hemi V8, a $2,400 option that looks almost as good as it drives. While most Grand Cherokee buyers make due with the already excellent 295 horsepower 3.6-litre Pentastar V6, the V8 rumbles so wonderfully at idle and makes such a brilliantly raspy note under full throttle I almost didn’t mind paying the extra cost at the pump, the latter auditory sensation enhanced further by a throaty dual exhaust system. And yes, it’s mighty quick off the line thanks to 360 horsepower and 390 lb-ft of torque shooting it forward with more get-up-and-go than anything else in its class, unless we’re comparing it to Jeep’s own 475 horsepower Grand Cherokee SRT or the outrageous upcoming 707 horsepower 2018 Trackhawk.

No matter the engine, Jeep equips the Grand Cherokee with a quick yet smooth shifting TorqueFlite eight-speed automatic with manual shift mode and steering wheel paddles, while the Trailhawk features off-road capable Quadra-Trac II four-wheel drive that includes a convenient Selec-Terrain dial on the lower console for choosing between Auto, Snow, Sand, Mud and Rock 4×4 settings, plus surrounding buttons for 4WD Low, a crawl mode, choosing between three individual heights for the standard Quadra-Lift air suspension, plus a low position for parking.

The Trailhawk rides on the Grand Cherokee’s normal duty suspension with increased travel, aiding 4x4ing capability yet not noticeably hampering on-pavement performance. It really does feel tight through high-speed corners and stable during quick transitions that can upset other SUVs, while its ride is plenty comfortable, even over rougher sections of broken tarmac.

Of note, both V6 and V8 engines come with Chrysler’s FuelSaver MDS (Multi-Displacement System) that shuts off a bank of cylinders when not needed, helping reduce fuel consumption under lighter loads. This, along with other efficiency tech, helps the Grand Cherokee V6 earn a five-cycle Transport Canada rating of 12.7 L/100km in the city, 9.6 on the highway and 11.3 combined, whereas my 5.7 tester was still pretty decent considering the power on tap at a claimed 16.6 city, 10.7 highway and 14.0 combined. The SRT? Don’t ask.

Everything mentioned so far was standard unless otherwise noted, incidentally, with additional options including a $1,495 Active Safety Group that adds an auto-dimming passenger-side mirror, rain-sensing wipers, adaptive cruise control with advanced brake assist, forward collision warning with active braking, lane departure warning with lane keeping assist, plus parallel and perpendicular semi-autonomous self parking, this package also forcing the inclusion of a $500 blindspot monitoring with rear cross-path detection. The only other addition my tester included were $1,195 worth of matte black Mopar Rock Rails down each side.

The only change for 2018 is Apple CarPlay and Android Auto smartphone compatibility in a slightly modified infotainment display, so you choose if moving into the newer model is the better bet or getting a deal on a 2017 is the way to go. I’d be happy either way. At the time of writing Jeep was offering $3,500 off in "Consumer Cash" and another $1,000 for a "Holiday Bonus", slicing $4,500 off the top of an SUV that was $66,165 prior to the discount, plus freight and fees of course. Again, this is premium territory, although try to get any premium branded SUV with even half my Grand Cherokee Trailhawk 5.7’s on- and off-road performance, let alone its features, and you’ll be paying much, much more.
©(Copyright Canadian Auto Press)
Car Shopping Tools