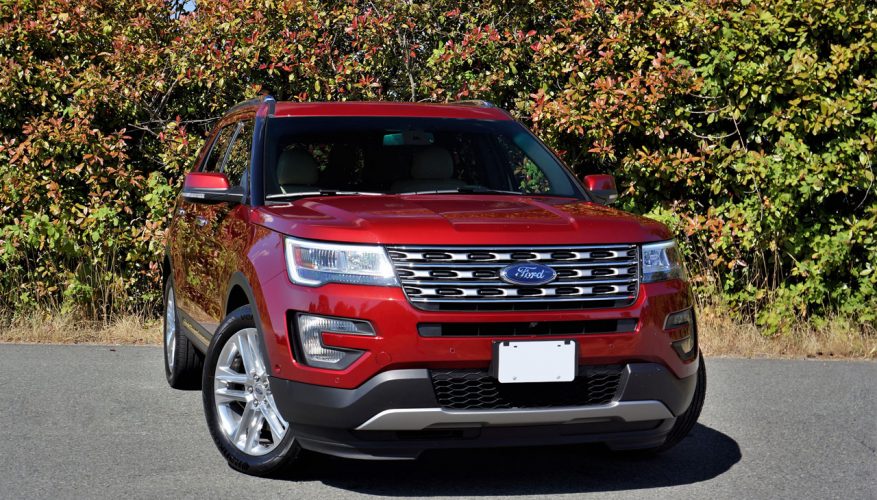 By: Trevor Hofmann
Ford gave its 2016 Explorer a mid-cycle update and it’s continued into 2017 more or less unchanged, its rounded edges sharper and less Range Rover like, albeit still paying unabashed homage to the luxury SUV brand’s iconic styling as if it were an Invicta Pro Diver 8926 trying to pass itself off as a Rolex Sub.

Scoff at Ford’s designers all you want, their plan is working. Last year the Explorer was the number one selling mid-size SUV in North America, while so far this year it’s edged past Kia’s Sorento to become the bestselling seven-passenger SUV in Canada. It’s about to set another modern-day sales record in the U.S. as well, the large mid-size model’s success seeming to know no bounds.

I must admit to liking the Explorer’s styling, in the same way a well-executed homage to a classic watch gets my respect, if not my investment. I’d sooner buck up for a vintage Doxa Sub, a Seiko 6309 or 6105-8110 Diver, or even a Vostok Amphibia, or something really outside the box like an Oris Diver Sixty-Five, a vintage Dugena, or Eterna’s Kontiki than anything that resembled an icon (an actual Rolex Sub is a bit out of my reach for the time being, as is the Rolex Explorer that would’ve been the more apropos watch analogy), but blue-oval utilities are hardly the stuff of collectors’ dreams unless we’re talking the classic WWII GP or original first- and second-gen Broncos. Still, there are plenty of good reasons a current generation Explorer would be a welcome addition to any home.

Only a small digital reference to time sits in the top, centre portion of my Limited 4WD tester’s large, colourful infotainment display, the Explorer’s interior being where Ford goes its own way as far as fashion is concerned. It’s an attractive layout, with acres of soft rubberized synthetic atop the dash and across each door upper (despite Ford claiming these as “leather-wrapped IP and door rollovers”), the door inserts finished in a nice stitched leather, and like most everything else in the class, all surfaces below the waist, seats aside, made from durable harder plastics.

Those seats are perforated leather in Limited trim, my version finished in Medium Light Camel beige, as were the door inserts and majority of lower interior panels, the look plenty upscale for this mainstream-branded mid-size SUV segment. Even more impressive, Dearborn uses genuine aluminum and “Ash Swirl” hardwood for the dash and door inlays.

Directly ahead of the driver a heatable leather-wrapped multi-function steering wheel frames one of the more advanced semi-digital primary gauge clusters in the industry, a central speedometer dial the only analogue element. While the leather of the latter feels substandard and the wheel’s rim not particularly comfortable due to awkwardly formed thumb spats, the colour multi-information display to the left is brilliant, incorporating a small digital tachometer, fuel gauge, and temperature gauge that can be swapped around to a trip computer, four-wheel drive front/rear bias indicator, digital speedometer, or individual tire pressure monitor, while the right-side display plays host to audio settings, a digital compass and clock, etcetera.

The driver’s seat is 10-way powered and extremely comfortable, even providing four-way powered lumbar support that’s not available with a number of pricier premium-branded models, while overall ergonomics are excellent, or at least they were for my five-foot-eight medium-build frame, and visibility superb all around. My tester wasn’t upgraded with the $150 second-row console that splits the bench seat into two buckets, but Limited trim provides standard second-row seat heaters in the outboard window positions, while the third row gets a power-folding feature that’s really handy, especially for returning them to their upright positions.

You can start the engine remotely and access the Explorer Limited via Ford’s exclusive SecuriCode keyless entry keypad, or use the key fob that allows proximity-sensing access as well as pushbutton ignition, while the rear powered liftgate gets foot-activated hands-free proximity access. Additional Limited features include front and rear bright metal scuff plates, ambient lighting, driver’s memory for the seat, mirrors, powered steering column and power-adjustable pedals, power-folding side mirrors, an auto-dimming rearview mirror, a universal garage door opener, a handy sunglasses holder in the overhead console, a media hub with a smart-charging USB and four 12-volt chargers, a 110-volt household-style power outlet, rear auxiliary climate controls, rear parking sensors, tire pressure monitoring, all the usual active and passive safety equipment including airbags for the front occupants’ knees, plus more for $49,399 plus freight and fees-Limited trim almost $16k pricier than the $33,499 base Explorer.

My tester was painted in beautiful Ruby Red, a $595 option, plus fitted with a $2,250 301A package that adds auto high beams, rain-sensing wipers, an auto-dimming driver’s-side mirror, multi-contour front seats with active motion, inflatable second-row outboard safety belts, blindspot monitoring with rear cross-traffic alert, lane departure warning, lane keeping assist, and semi-autonomous parallel and perpendicular parking, while my tester also included $1,500 worth of adaptive cruise control with forward collision warning and brake support, plus you might also notice the dual-pane panoramic sunroof above that added $1,750 to the bottom line.

Ford’s naturally aspirated 3.5-litre V6 featuring 290 horsepower and 255 lb-ft of torque comes standard with the Limited as with lesser Explorer trim levels that include the base namesake model and second-rung XLT. This engine is plenty potent, even more so than a number of the Explorers’ many competitors, but why should Dearborn stop there when they’ve got such a deep and varied parts bin to choose from. Therefore, my tester was fitted with the optional $1,000 2.3-litre four-cylinder Ecoboost capable of 280 horsepower and 310 lb-ft of torque, whereas top-tier Sport and Platinum trims come standard with the 3.5-litre V6 Ecoboost good for 365 horsepower and 350 lb-ft of torque.

All utilize a well-proven six-speed automatic transmission, my tester’s even sporting steering wheel paddle shifters, unusual yet very welcome in this three-row SUV class. It’s a smooth gearbox with quick, precise, snappy shifts when in Sport mode, transforming the big SUV into a really sporty ride when mated up to the free-revving 2.3-litre Ecoboost.

All Explorers get a fully independent suspension that’s quite agile as far as car-base SUVs with real off-road capability go, and less weight over the front wheels always helps with handling. This is an SUV that provides good overall balance through tight, fast-paced corners yet hardly compromises in ride comfort, while its highway cruising prowess is also near top of class. It’s quiet too, helped out by active noise reduction, acoustic windshield glass, plenty of sound deadening material all around, and those soft-touch surfaces mentioned earlier, but as noted it can actually go where few of today’s soft-roaders dare to tread.

The bottom two Explorer trims make 4WD optional, but the Limited comes standard with Ford’s Intelligent 4WD and Range Rover-style Terrain Management System that lets you select from five backlit pictographs atop a lower console-mounted rotating dial if pavement suddenly turns to trail. The first default image shows the SUV on a flat surface, which makes it the go-to option for pavement, while the next “Mud/Ruts” pictograph showing wheels in trenches and a tree depicts a more aggressive wilderness trail. You should leave the angled SUV and cactus “Sand” image for the finely grained granular stuff, whereas the final swerving tire tracks and snowflake graphic is best for slippery winter conditions and gravel roads. Hill descent control is standard, acting like an engine brake to ease the SUV down steep grades, while standard hill start assist can be useful both on- and off-road.

This leads me to cargo hauling, which is an Explorer forte thanks to a sizeable, upright shell and two rows of completely flat-folding rear seatbacks. This is where SUVs win out over most minivans, the latter providing more interior volume overall, but only one manufacturer offering seats that lower into the floor for a flat loading area. Ford replaced its minivan with a series of three-row crossover SUVs based on its D4 platform years ago, and doesn’t appear to have suffered. Certainly cargo space isn’t as grand, but ease of loading long items is much better. Altogether the Explorer offers up 595 litres (21 cubic feet) of gear-toting space behind the third row, much thanks to a deep well that houses the folding rear seats when lowered. It’s expandable to 1,240 litres (43.8 cubic feet) when that 50/50-split third row is laid flat, while the 60/40-split second row drops down to accommodate up to 2,313 litres (81.7 cubic feet) of what-have-you if the need arises.

The second and third rows are also quite roomy when upright, this not all that common for rearmost seats in this class despite claims to seven-passenger seating. Most third rows are good for small children at best, but I had no problem climbing past the second-row seat when pushed forward for third-row access, and then getting comfortable in the very back. I wouldn’t recommend it for anyone over five-foot-ten, but kids, preteens and smaller adults should be quite content.

Accommodating, comfortable, well equipped, fun to drive, economical, and good looking, the Explorer has a lot to offer Canadian families. It does most everything well, which seems reason enough for its popularity.
©(Copyright Canadian Auto Press)
Car Shopping Tools