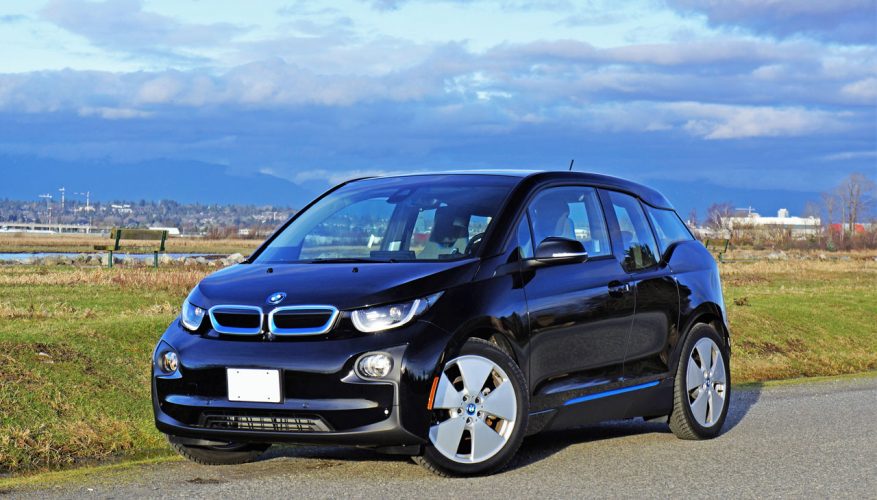 By: Trevor Hofmann
A lot has happened on the electric vehicle front since BMW came to market with its i3 in the spring of 2014. It was an anomaly amongst premium carmakers at the time, and while no competitive brand has anted up with a subcompact hatchback to do direct battle with this upstart imp, plenty have entered the plug-in hybrid fray.

The i3 started life with a cute albeit unusual exterior design and one of the more appealing interiors I’d experienced up to that point. Today, its outer styling remains quirky yet relatively fresh due to rarity, and its interior is still amongst personal favourites.

It was always a bomb to drive, with quick acceleration and superb handling, the latter surprising when first eyeing its tall, narrow, stubby proportions, and while its approximate 160 kilometres of electric-only range was reasonable for the day, more would’ve helped. That’s how it stayed for its first few years, but for 2017 BMW bumped up the capacity of its battery from 22.0- to 33.0-kWh, allowing for a claimed 200-km range.

Before getting too excited you should be aware that the U.S. EPA gives it a more conservative 183-km range rating, but either one represents a 40-percent improvement in EV-specific distance traveled between charges, which is a positive step forward. Then again, we live in an era of 383-km Bolts and 499-km Model 3s, both of which cost less than the i3.

This was the first base Loft model I’d tested of the four previous examples, the first in my favourite Lodge trim, the second in full-load Suite guise, and the most recent one also totally decked out in Suite trim, which helped me appreciate what $48,150 plus $2,095 in freight buys you.

Ok, that’s not completely accurate. Believe it or not, if you want such high-tech wonders as proximity keyless access, a backup camera and satellite radio you’ll need to pay another $3,000 for a Premium package that also adds a universal garage door opener, front and rear parking sensors, semi-autonomous self parking, navigation with detailed mapping, and a smokers package (why this last one is included in this package is anyone’s guess), so my tester was actually priced at $51,150 before freight and fees.

But wait, you might notice the lovely wood trim across the dash, which is priced at $350 yet somehow adds another $500 to the final price thanks to a requisite $850 Interior Design Selection upgrade, while my tester also included a $1,200 dual-pane sunroof, plus of course its $4,000 Range Extender (REx) two-cylinder gasoline engine, which collectively pushed the price up to $57,550 before freight and fees.

If I were to add my favourite Lodge interior it would’ve only cost me an extra $350, or you full leather types can spend $900 for Suite upholstery, while metallic paints will set you back a cool $895 despite there being very little composite paneled area to cover.

Lastly, you can add a $2,750 Technology package that includes a Harmon/Kardon audio upgrade, semi-autonomous self-steering, the ConnectedDrive Services smartphone package. Seems like a ton of money for a stereo, being that many will want the audio upgrade without being forced into the other items.

The Frozen Blue accents are standard, as are 19-inch alloy wheels (you can choose from three if the rims on my tester are as unappealing to you as they are to me), auto on/off LED headlights, auto-dimming interior and side mirrors (the latter also power-folding), pushbutton ignition, an electromechanical parking brake, a leather-wrapped multi-function steering wheel, dynamic cruise control, rain-sensing wipers, dual-zone auto climate control, an auxiliary heater, heatable front seats, emergency assist, an alarm, and more, which make it a fairly well equipped little EV.

With prospective range now somewhere between the 183-km EPA estimate and the 200 km projected by BMW, how did I fare? When I picked it up there was 946.1 kilometers on the odometer, 142 km of estimated EV range, and an additional 82 km of range on the REx.

My partner joined me for the next stint, a photo shoot that normally sees her behind the camera and me behind the wheel (pivoting the car around in circles). One problem though, once we arrived at our location I realized I’d left the camera back at the house, causing me to race back and forth at a really fast clip so we didn’t lose the sun. The i3 took off from standstill like a slingshot and handled brilliantly, but if course this kind of driving isn’t the best for optimizing range. All in all our afternoon adventure totaled 29.6 km for a new total of 996.1 km on the odometer, plus we spent about an hour and a half “idling” while doing exterior and interior photos. All of this caused the range indicator to show 117 km.

While this latter example hardly helps us figure out normal real-world range, we shouldn’t forget that a key consideration when purchasing an i3 is its inherent “BMW-ness,” or rather it’s quickness off the line thanks to 170 horsepower and stability through fast-paced corners due to rear-wheel drive and a wonderfully balanced suspension. For this reason its use of 40 km of estimated range to cover 29.6 actual km, half of which was covered at somewhat higher speeds than I’d care to mention, plus time spent going nowhere yet using up battery life, is pretty reasonable. I drove it throughout the week and found its real distance remained very true to the range indicator’s estimates, making route planning easy.

Of course, the REx takes care of any range anxiety you may have, my only real concern occurring on my last day with the car when I had too much EV range left to fully drain the battery and experience the little REx in action. Watching my clock to make sure I returned the i3 on time, I set out on the highway at about 95-100 km/h in hopes that speed would quickly deplete the battery. Sure enough, with enough miles under its belt my odometer showed 1,086.5 km and my range indicator displayed zilch. At 1088.0 km I felt the REx switch on, which was only noticeable due to a slight whirring from behind. The REx makes a constant, even droning noise, because it’s not actually driving the motive wheels but instead recharging the battery. Let your foot off the throttle and it winds down to a low hum, but reapply it and the constant revs resume. I certainly had no trouble keeping up in traffic on the highway, the little car still providing plenty of passing power. Truly, it didn’t feel any different than the electric motor on its own.

As for charging, the standard i3 incorporates AC quick charging and the REx upgrade adds DC quick charging as well, which means you can add an 80-percent charge to your battery in about 40 minutes. That’s if you can find a DC quick charger. I’d recommend you purchase one for your home if you live somewhere it can be installed. If you don’t, I can’t recommend a plug-in at all. A couple of years ago, using a public charger wasn’t an issue in my city because there weren’t many electrics on the road, but now there are a lot more EV drivers thanks to cars like this impressive little i3, so you’re going to be hard pressed to find one that’s not already in use.

If you can find a 240-volt public charge station that’s not already taken the i3 needs between four to five hours to completely fill up, while if you’ve got to charge it from a 120-volt socket at home you’ll need 13 to 16 hours. In other words, plug it in when you get home from work until you leave the next morning. If you’re driving an older generation i3 and these charge times seem too long, remember the 2017 model’s larger battery needs more time to top up. In comparison, the Chevy Bolt’s 60kW/h battery can take up to 36 hours to charge from a conventional home socket.

No matter which EV you’re considering, three provincial governments offer taxpayer money to coax you into cleaning up your act. The rebate is $5,000 in BC, $14,000 in Ontario, and $8,000 in Quebec. The rest of the provinces get no incentive, but at least the regular working stiffs who can’t afford one of these pricey EVs aren’t forced to foot the bill so richer folk can drive a nicer car. That’s a political discussion for another time, and arguably EVs like the i3 wouldn’t exist without some governmental assistance.

For the time being the i3 remains the only full EV offered under a premium badge in Canada, unless you consider Smart premium, in which case you can opt for the ForTwo Electric Drive. In the U.S., the Mercedes-Benz B-Class Electric Drive joins the Tesla 3, but so far we have neither in Canada.

This said plenty of premium EVs are on the way, which will go a long way to promoting cleaner local air. Until then, consider the i3. It’s not the newest EV on the block, but it’s still very capable and provides a premium driving experience along with a level of interior refinement that’s unmatched thus far. Likewise, its advanced carbon-fibre monocoque construction is the stuff of supercar dreams, and just one more reason why BMW EV customers can feel like they’re getting their money’s worth when bucking up for this pricey little subcompact.
©(Copyright Canadian Auto Press)
Car Shopping Tools