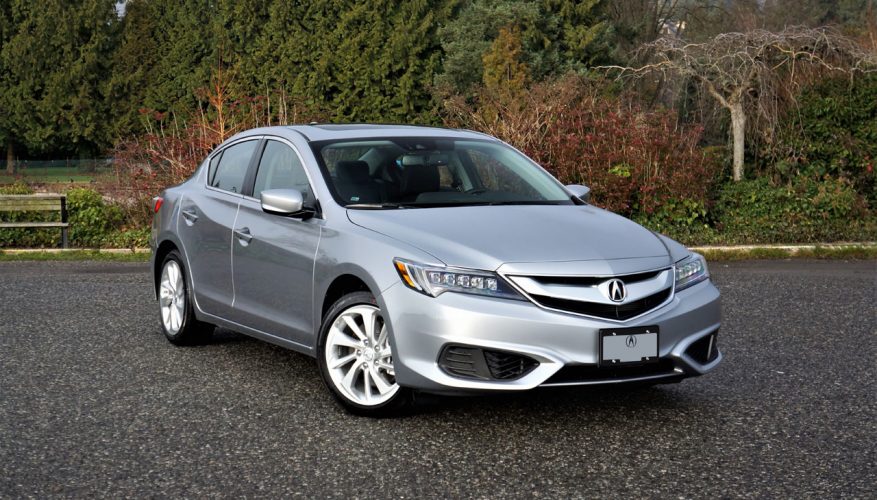 By: Trevor Hofmann
Newest doesn’t necessarily mean best. In fact, sometimes cars that have been around the block a few more times than their immediate rivals can offer better reliability while still delivering strong performance, good functionality, plenty of creature comforts, and good all around value. Acura’s ILX slots right into this category.

The ILX is a derivative of Honda’s previous ninth-generation Civic that dates back to 2011, which means it doesn’t ride on the automaker’s new compact global platform that’s formed from higher grade steel in order to save weight while increasing rigidity, yet it nevertheless delivers a rigid body structure featuring plenty of sharp angles and complex curves, which arguably combine into a more conservatively acceptable design for those put off by the Civic’s somewhat polarizing styling.

Design in mind, the ILX remains one of two Acura models to carry forward without the new “Diamond Pentagon” signature grille, the Japanese brand’s bestselling RDX compact luxury SUV being the other holdout. Still, since receiving the brand’s distinctive full LED headlamps and revised front and rear fascias as part of its 2016 model year facelift, it remains plenty attractive if not as fresh as the rest of the lineup.

All said I think the ILX has aged pretty well. Replacing the Civic-based CSX when it arrived in 2012 for the 2013 model year, it became the first C-segment luxury sedan to enter the U.S. market since the 2001 Integra departed. Of course, Canadian entry-level luxury buyers had been given the exclusive option of the CSX for six years before that, while that car’s EL predecessor had been available since the demise of the Canadian-spec Integra four-door in 1997, four years before our friends to the south said goodbye to theirs. For a bit of additional history, we kept the two-door Integra coupe until the 2002 RSX arrived.

Each new EL, CSX and ILX generation has become less rooted in its Civic donor platform, to the point that there’s very little in common with the two models now. Even the very heart of the ILX is unique, its naturally aspirated 2.4-litre four-cylinder engine no longer shared with the Civic Si, and its standard eight-speed dual-clutch transmission purely assigned to Acura’s lineup, although it’s so good that Honda should seriously consider adapting it to that new Si as a much-needed option.

Being that I reviewed a mid-range Premium trimmed model earlier this year, I decided to revisit the 2017 ILX in near top-line Technology guise. As a refresher, the 2017 ILX lineup consists of the very reasonably priced $29,690 base model, $32,190 Premium trim, $33,690 Tech trim being reviewed here, and range-topping $35,090 A-Spec trim.

Tire pressure monitoring, hill start assist, and all the usual active and passive safety features are included too, but some might be surprised to hear the ILX also features a comprehensive suite of AcuraWatch advanced driver assistance tech, such as adaptive cruise control, forward collision warning, autonomous collision mitigation braking, lane departure warning, lane keeping assist, and road departure mitigation, which means that base Canadian-spec cars would be those that qualify for best-possible IIHS Top Safety Pick + status, whereas all trims in Canada and the U.S. achieve 5-star NHTSA safety ratings.

My Tech tester added much-appreciated rain-sensing wipers, very accurate navigation with detailed mapping, voice recognition, an impressive 10-speaker ELS surround-sound audio system with Dolby Pro Logic, enhanced AcuraLink smartphone connectivity, and a HomeLink garage door remote, while the A-Spec gets all of the above plus an aero body kit including side skirts and a rear spoiler, fog lamps, sportier 18-inch alloys, metal sport pedals, Lux-Suede upholstery, and a black headliner.

Even without the A-Spec upgrade the ILX Tech is plenty sporty and good fun to drive, its exclusive 2.4-litre four-cylinder powertrain an absolutely wonderful engine that, as noted earlier, was recently discontinued from the Civic Si that now features a turbocharged 1.5-litre four, while the aforementioned eight-speed dual-clutch auto provides the kind of direct, positive response a continuously variable transmission (the only automatic offered in any 10th-generation Civic so far) couldn’t hope to match.

In my opinion, the eight-speed DCT is the biggest bonus for moving up from Civic to ILX, although I’m not going to compare a Civic Si to the ILX, per se, especially considering the Si doesn’t offer an automatic gearbox at all, but rather comes exclusively with one of the best six-speed manuals in the industry, whereas the outrageously quick and superb handling Civic Type-R that I tested since, completely redefines front-wheel drive performance. Let’s just say the ILX combines excellent straight-line acceleration with a performance-oriented dual-clutch gearbox that’s as smooth and refined as the majority of its premium buyers should want, while its fully independent suspension setup balances an ability to carve up canyon two-laners with ease yet provide the kind of comfortable ride quality required by the luxury.

Truly, I’d be happy with the ILX as a daily driver, especially when factoring in its fairly stingy 9.4 L/100km city, 6.8 highway and 8.2 combined five-cycle fuel economy. It’s an extremely easy car to wind through congested city traffic too, yet it’s wonderfully stable at highway speeds and thoroughly engaging when pushing hard through a tight set of S-curves. Likewise the engine seems totally docile when merely puttering along, yet open the ILX up and its 201 horsepower and 181 lb-ft of torque launch it forward with a vengeance, the engine revving freely and sounding sensational when spinning up toward its 6,900 rpm redline. Paddles at the fingertips, each shift is quick yet smooth, the entire car feeling more hands-on and in control than some others in the class that seem as if they want to control you. Yes, Acura, and its Honda parent, are well steeped in building compact performance cars, the ILX closest to the previous Civic Si than anything else currently available, but as intimated earlier, a lot more grown up.

Slowing down enough to take a good look around, the cabin is nicely finished with the types of materials and details expected in the premium class. Most everything above the waist is finished in high-quality synthetics, with the soft-touch door uppers extending down to the midway point before making way for even plusher stitched leatherette, while the armrests are plenty nice too. The lower portions of the doors and dash are formed from a harder plastic, but it’s certainly high enough in quality and par for the course in this class.

Likewise, the rear quarters are finished to the same high level as those up front, with each window seat carved out like an individual bucket for extra lateral support. As expected, a sizeable armrest folds down from centre, integrating dual cupholders. As for roominess, I had about five inches ahead of my knees and plenty of space for my feet when sitting behind the driver’s seat, which was positioned for my five-foot-eight medium-build frame, plus ample room for my shoulders and hips, while the two inches remaining above my head made the ILX twice as airy as an Audi A3 Sedan I tested the day prior, which only provided about an inch from head to roofliner.

The A3 provides a lot more convenience for loads, however, with a back seat that divides 60/40 and includes a centre pass-through for longer cargo such as skis, compared to a downright rudimentary single-piece folding seatback. I suppose ILX buyers should be glad it folds at all, but most of us require greater passenger/cargo flexibility. The ILX’ trunk is also 77 litres (2.7 cubic feet) smaller at just 348 litres (12.3 cubic feet), and it’s not finished as nicely, with no protector plate over the sill, zero metal tie-down hooks, and lower-end carpeting.

That’s my only complaint about a car that otherwise remains very competitive in its entry-level luxury class, especially when factoring in pricing. Even this near top-line Tech trimmed ILX is only slightly more expensive than the most basic A3, which is also front-wheel drive and nowhere near as well equipped. This said, ILX deals are even better this time of year. I admit it’s a bit late for a 2017 model year road test of any car, but there are still plenty available with fairly deep discounts of $3,500 when financing or leasing and $4,500 when paying cash for Premium, Tech and A-Spec trims, plus there’s no difference between this 2017 and the 2018 model that’s already on sale, so why not sock away the savings? I’d recommend acting fast if you want to take advantage.
©(Copyright Canadian Auto Press)
Car Shopping Tools