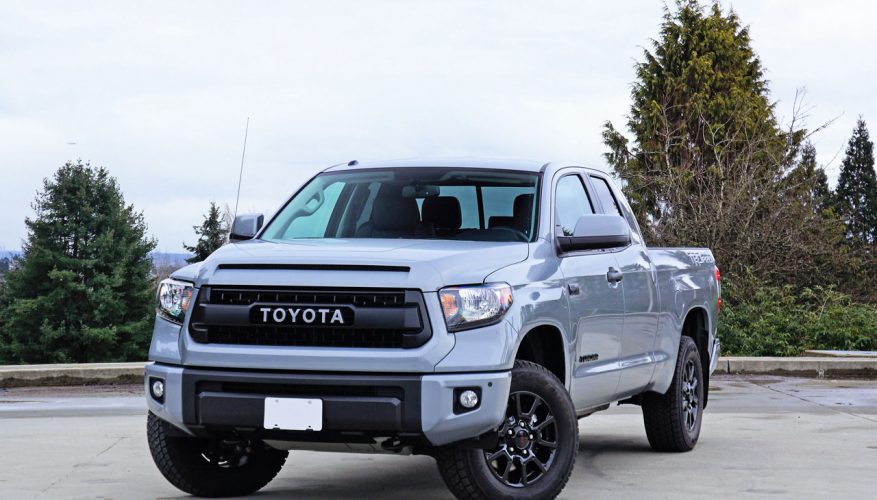 By: Trevor Hofmann
I have to say, this Tundra TRD Pro took me off guard. It’s bold, brazen, and just plain baddass! Chrome? Not. It’s matte black all the way, except for its superb “Cement” grey paint.

I can’t tell you how many rubberneck looks it received from passersby during its test week, but suffice to say it’s pulled more eyeballs than most of the ultra-exotic hardware I’ve driven this year, and the sound its big 5.7-litre V8 makes at full throttle is almost as intoxicating as the exhaust note of one of those supercars (the amount of gas it guzzles is almost as dizzying too). At 381 horsepower and 401 lb-ft of torque it’s quick for a 2,480-kilo (5,467-lb) behemoth too, but its ultimate capability is meant to be experienced off-road.

TRD Pro trim, which sits just above the similarly named TRD Off-Road model, adds 18-inch alloys on 275/65 rubber (my tester’s in Bridgestone Blizzaks due to a winter test week), TRD-customized dual internal piston Bilstein shocks with remote reservoirs providing an extra two inches of lift up front and 1.25 inches at the rear resulting in 269 mm (10.6 inches) of ground clearance, a larger rear sway bar, rugged skid plates, performance exhaust, and all that anti-chromed styling goodness noted earlier. A locking rear diff isn’t part of the package, nor are disconnecting sway bars for maximum articulation, but nevertheless all 4×4-equipped Tundras have proven their worth off-road and the TRD Pro moves such credibility and capability up a notch.

I only had time to take it through an open 4×4 area near my home, where two-foot dried mud ruts and a few extreme verticals were easy peasy for this heavy-duty half-ton (shout out for the descriptive line to now-deceased character Bob Newby of Netflix’ brilliant Stranger Things, played by Sean Astin, previously Sam Gamgee in Lord of the Rings and Mikey in Goonies). In fact, the Tundra TRD Pro made such light work of the rugged terrain below it would need an extreme level-five trail to cause it any grief.

The rest of my test was left to city traffic, backcountry drives, highway cruising and the like, just the usual day-to-day hauls anyone with a pickup truck must endure. To that end the Tundra TRD Pro handled well and was comfortable enough, but not as easy to get along with as the CrewMax Platinum 1794 Edition I drove last year or the Double Cab 5.7 Limited Tech 4×4 I enjoyed the year before that. You can feel the beefed up suspension’s firmness on rougher pavement, and the cabin is certainly more spartan than those ritzier trucks, or most of its peers for that matter.

It wasn’t without creature comforts, the red-stitched padded leatherette trim along the front door uppers as well as the instrument panel ahead of the front passenger quite nice, this matching the seat leather to a T, and its various satin-silver metallic surfaces attractive enough, but the majority of interior surfaces are hard plastic and notably poorer in execution than its full-size pickup truck competitors, while its smallish rear quarters didn’t even go so far as to soften the upper door panels.

Likewise it’s a bit sparse with equipment for a $57,770 truck, its cheap key dangling from a five-and-dime remote fob by chintzy metal rings, no proximity keyless access letting occupants inside, and no pushbutton ignition to get things going. The steering wheel is polyurethane instead of leather, and its switchgear fairly rudimentary, the gauges in behind merely analogue and the multi-info display at centre just a bit more feature-filled than a monochromatic trip computer.

The 7.0-inch infotainment touchscreen is decent enough, plus comes filled with a backup camera, accurate navigation and more, but it’s not as slick looking as other systems in Toyota’s lineup and doesn’t include full smartphone integration via Apple CarPlay, Android Auto or Toyota’s own Entune system either (the latter is coming to the Camry for 2018, but so far no other models). It does have Bluetooth, of course, with audio streaming, plus satellite radio integration if you’re willing to pay the monthly fee, while the sound of the six-speaker audio system is pretty good. This said the nice looking metallic framework around the centre stack wasn’t put together very well, the left topside portion loose and wiggly due to not being fastened properly. It didn’t squeak yet, but nevertheless I haven’t seen such shoddy workmanship since before GM got its act together.

What’s more, this near $60k pickup truck doesn’t even offer automatic climate control, its three-dial, single-zone manual setup once again rudimentary at best, while the dials themselves look good thanks to spiffy metallic finishing, yet are made from hollow feeling plastic and wiggle a bit too much for my liking. Even the heated front seats offer nothing more than single on/off adjustment, albeit a toasty warm setting, while the driver’s position is powered, but its lumbar support only moves in and out, not up and down. I found it comfortable, mind you, a Toyota trait, but the steering column’s reach didn’t extend far enough for ideal ergonomics, at least for my long-legged, short-torso five-foot-eight body, leaving my arms extended too much for long-range comfort or emergency avoidance control.

A sunglasses holder sits overhead, always handy, but no sunroof was included, although the rear window featured a manually operated centre slider for better fresh airflow through the cabin. And those rear seats? Like I intimated earlier, they’re hardly long on legroom or capable of reclining. Instead you sit upright, which might prove uncomfortable for larger adults on longer trips. This said I had enough space despite my knees rubbing up against the soft front seatbacks, while I appreciated the convenience of flipping the bottom cushions upright for loading gear into the storage bin below.

I wouldn’t care one bit if my kids were cramped, my son now four inches taller than his old man and quite capable of taking care of himself. I never had the luxury of a forward facing back seat in my dad’s various pickups, oftentimes relegated to the bed in the back, which I happened to love. Today’s safety measures don’t allow such fun, which is a shame considering the Tundra’s spray-in bedliner is downright luxurious in comparison to the hard painted floors of yore. Bed rails can be found behind the cab and down each side of the six-and-a-half-foot long box, while slide-able tie-down cleats make easy work of strapping down loads. Additional hoops can be found at each corner, plus you can get plenty more to upgrade its loading capability from Toyota’s accessories catalogue.

A weakness is bed access. Toyota only provides reasonably sizeable hard plastic bumper steps at each corner, but on wet days the semi-grippy surface would be prone to slipping. I like GM’s innovative bumper-integrated CornerSteps better, while Ford offers its complicated yet superbly functional Tailgate Step and handle that’s retractable from within the tailgate. Toyota needs to think outside the box when it comes to such conveniences, because most people climb into the bed when the tailgate is down, and the best step for doing so is underneath that tailgate. Being smaller of stature I would need to look into options for pull down steps from Toyota’s accessories catalogue, or on the aftermarket. If you configure the same truck on Toyota’s website, you’ll see nothing from their list of dealer-added accessories, only the usual side steps, bed extenders, etcetera.

All that is good, but the aforementioned 5.7-litre V8 is a gluttonous beast, its fuel economy rated at 18.0 L/100km in the city, 14.2 on the highway, and 16.3 combined. That’s horrendous, and would seriously cut short any extended forays into the wild. Why Toyota hasn’t made the plunge into light-duty diesel is uncertain, or at least a turbocharged V6 like Ford’s Ecoboost. Likewise, only Toyota’s well proven but hardly state-of-the-art six-speed automatic transmission is on offer, a sturdy gearbox yet not as efficient as something with more forward cogs. As it is, such poor economy won’t help it gain traction on sales charts.

While I’ve been openly critical of this Tundra for many of its shortcomings, there’s a very good reason I’d still consider owning one. No other full-size pickup truck does as well in maintaining its resale value according to Canadian Black Book’s 2017 Best Retained Value Awards, only the Tacoma doing better amongst pickup trucks overall.

That’s money in the bank, and it’s hard to argue against that. Of course money isn’t everything, but there are smart decisions and there are stupid, often emotional ones, and choosing best resale value is just plain intelligent. Another argument on Toyota’s side is reliability. My dad owned a first generation Tundra for nearly eight years and never once had an issue. I know of many stories like this, just like most of us are aware of stories about trucks that cause nothing but trouble. For instance, the truck my dad got rid of in order to get his Tundra was an F-150, which went through three transmissions in its first two years, plus front brake rotors before they should have been needed. Of course you never know what’s going to happen with one truck compared to another, but dependability has long been a Toyota strongpoint.

All that reliability and residual value should carry forward into the 2018 model already on sale, while the new truck has been given a mid-cycle refresh that will hopefully improve some of the less appealing interior plastics while upgrading the gauge cluster and infotainment system. The 2017 Tundra TRD Pro is still worth owning though, thanks to fabulous style, a rugged suspension, capable hauling, and strong straight-line performance, but that performance comes at significant cost at the pump that Toyota will want to address. Yes, it’s hard to give my full heart to the Tundra when so many more qualified trucks are on offer, which is partially why it sits so far down the sales charts.

Toyota Canada sold just 7,069 Tundras after the first three quarters of 2017, which is good if you like exclusivity albeit bad if you want your favourite brand to have enough model profit to invest into redesigns, features and OEM accessories. Still, the Tundra is still giving Nissan’s Titan hard time, its Japanese branded rival struggling at 4,868 units over the same nine months, while both look rather sheepish when compared to domestic truck sales, the least most popular Ram pickup having found 80,688 buyers by the close of September, GM’s Chevy Silverado/GMC Sierra duo combining for 84,186 loyal customers, and the top-selling Ford F-Series walking away with 123,036 Canadian truck lovers (and commercial fleet sales). Tundra has been averaging less than a thousand units per month in Canada, so unless it gets a particularly strong fourth quarter this won’t be a banner year, 2007 (the last year it was fully redesigned) being its best sales ever at just 11,552 units. Saying the full-size pickup truck market is a tough nut to crack for a newcomer might be the biggest understatement possible in the auto sector.

Still, if Toyota wants to make a serious dent in the full-size truck industry, and the Tundra has truly only caused a few minor scratches on the back bumpers of its big three rivals, they’re going to have to step up their game in a major way. The Tundra TRD Pro is decent effort, but not good enough to cause Canada’s pickup truck faithful to cross the line and change brands.
©(Copyright Canadian Auto Press)
Car Shopping Tools