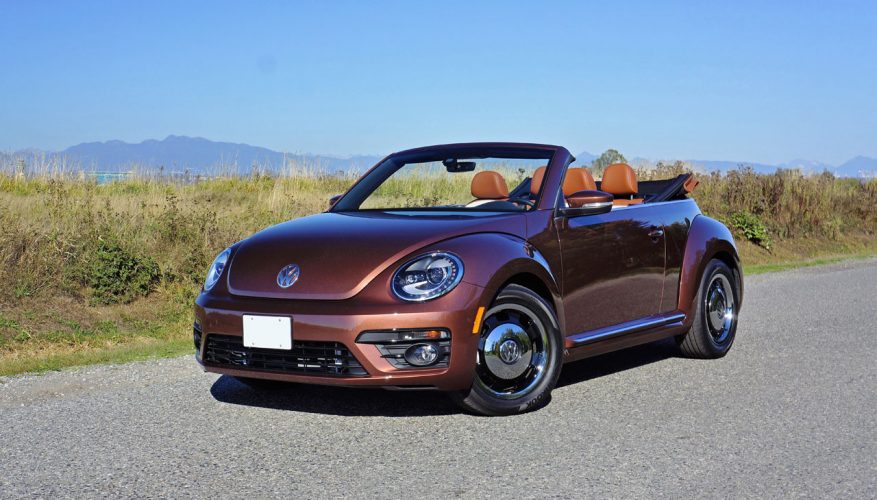 By: Trevor Hofmann
Those who grew up with VW Beetles in their lives can’t expect everyone to appreciate their unabashed affection for the unusually shaped conveyance, but luckily there are still enough of us out there to continue its production. Word has it the Beetle’s days are numbered, but fortunately it has some life in it yet.

My most recent Beetle tester was a smart little Convertible in Classic trim, painted a lovely Dark Bronze Metallic that was more of a chocolate brown, with an ideally matched almond Beige soft-top. The colour reminded me of my dad’s personally repainted ’66 Beetle that started metallic brown yet ended up a strange yellow-orange we kids endearingly called puke, but that’s a story for another time.

Classic trim is about to make way for new Coast trim for 2018, which comes in much fewer colour options albeit retains the Beige roof and cool Classic alloys with chromed caps. The 2018 model gets a boost in engine output for its swansong too, bumped from this 2017 version’s 170 horsepower and 184 lb-ft of torque to an ultra Super Beetle-like 174 horsepower and identical torque. Ok, that’s probably not a lot to get excited about, although the 200-cc-larger 2.0-litre I-4 will reportedly improve fuel economy over the current 1.8-litre turbo-four’s 9.7 L/100km city, 7.2 highway and 8.5 combined rating, which is nothing to sneeze at even if the benefit is nominal.

The revised 2018 Beetle will make due with the same well-proven six-speed automatic gearbox as this 2017 model, which I must say is a lot quicker shifting and therefore sportier feeling than some of the more modern nine-speed transmissions, while utilizing its Tiptronic manual mode makes it feel more like a true classic Beetle than merely leaving it in drive.

Beetles have always been nice riding cars, and this Convertible Classic is no different. It cruises nicely on the highway with the top up or down, the latter causing expected wind buffeting yet nothing extreme (unless in back), although I must admit that most of the time I drove with the top up. Yes, VW gave me this convertible as September ended and October began, which isn’t exactly drop-top weather despite our willingness to power it down for our photo session. We drove around with the heater cranked for a little fun, but I was quickly put in place by my better half and the top went up to provide coupe-like silence and warmth for the rest of our weeklong test.

Of note, Comfortline trim was dropped earlier this year for a new Trendline base model that will continue into 2018, the 2017 model starting at $25,390 plus freight and fees. Classic, like next year’s Coast, is based on the Trendline, albeit gets more of a vintage look that I happen to like, this including the aforementioned steel wheel-like 17-inch Heritage alloys with chrome plated hubcaps, ’50s-era “Volkswagen” script badging at the back, plus a body-colour painted instrument panel, steering wheel spokes and door uppers along with two-tone black and camel beige upholstery with cool light beige and cream checkered seat inserts. If only they’d added a matching picnic basket. Still, at $27,390 it’s hard to complain.

That top is powered, quickly lowering or raising back up again at the touch of a button, but I wouldn’t recommend wrestling with the awkward tonneau cover that requires serious muscle to click into place. I left it in the trunk, but if this were my personal ride I’d stow it in the garage, as there’s not a whole lot of cargo capacity available. At least the rear seatbacks flip down 50/50 for longer cargo like skis, making the most of a compact situation.

I should also mention that all 2017 Beetles receive the sportier R-Line front-end treatment as well as a standard rear spoiler, which honestly don’t work quite as well with the Classic look as the older rounded styling did. Still, it’s a minor point considering this car is enjoying its last kick of the can, so to speak. Fortunately it appears an electrified retrospective Microbus will replace it, but that won’t be here until 2022 according to the interweb rumour mill. Will the slightly revised new Beetle soldier on until then? That’s hard to say, but as long as it remains popular enough there’s no reason for VW to kill it off. I, for one, will enjoy each new modification and special edition as they arrive.
©(Copyright Canadian Auto Press)
Car Shopping Tools